Northern Shovelers: Here, there and everywhere! 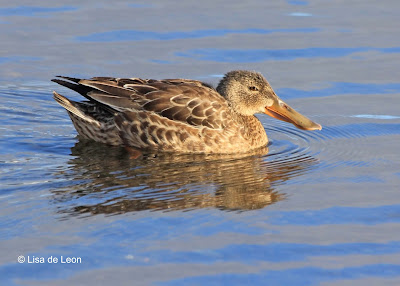 Northern Shovelers are around. Reports have indicated they have been seen at Mundy Pond, Virginia River and Second Pond. Up until yesterday, I had only heard about two at each location. However, I saw three female shovelers at Quidi Vidi Lake yesterday morning.  A quick check this morning turned up zero Northern Shovelers. It is as though they don't quite know where to stay. Are there only three or are there more moving around between the ponds? 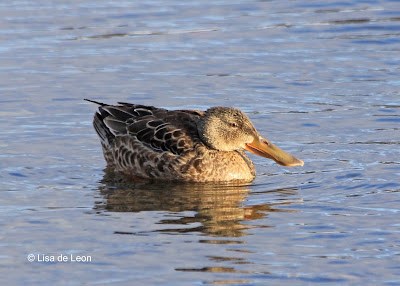 The Northern Shoveler is a medium sized duck  measuring from 17 to 20 inches.  It would be easy to overlook these little female ducks among the many other Black Ducks, Mallards and Domestic Ducks that are filling up the open ponds these days.  The female shoveler is grayish-brown with light edging around the darker feathers. The female has a blue patch on the wing, although sometimes it is more obvious in some birds than others. 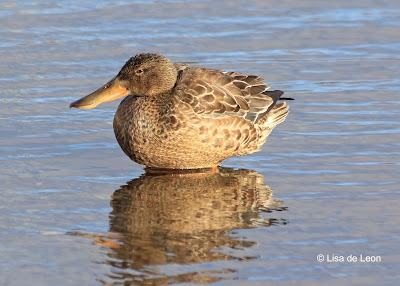 The clincher here is the very long bill that is wider at the tip than at the base. These ducks are definitely front-loaded which may account for the fact that their bill always points down toward the water. 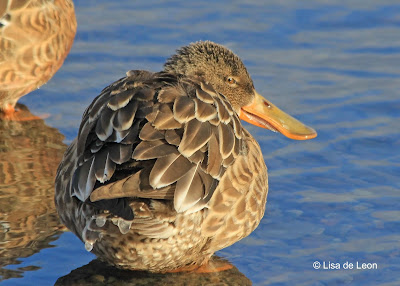 The 2.5 inch long bill is edged with 110 fine lamellae that are used to filter the food from the water.  Click on this image to enlarge it and get a better look. 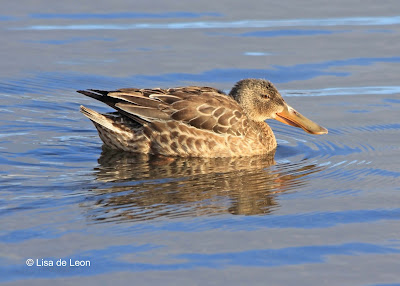 Where will these Northern Shovelers turn up next? The ponds are beginning to freeze over, and only the larger ponds with river inflows will remain open as the weather gets colder and colder, making QV Lake, Mundy Pond and Virginia Lake the most likely places to find these birds.  With the NF Winter Bird list season in full swing,  roaming birds can create a real challenge for birders wishing to add this species to the list. Good luck!
Posted by Lisa de Leon at 5:25 PM