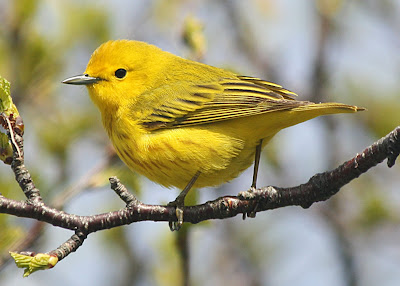 The burst of the sweet sound of the warblers in Spring was all too short. Perhaps it was because the weather was so good, the birds got to the business of breeding which is why they return to Newfoundland. 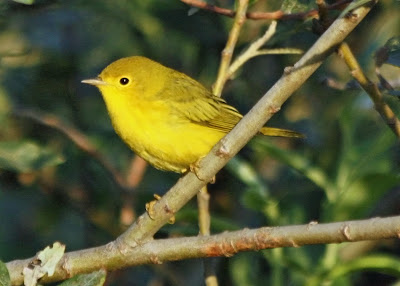 It seems the male Yellow Warblers return first, followed shortly by the females.  The male  stakes out a territory and is ready to raise a family as soon as the female arrives. Pictured above is the male with the red streaking on the breast, followed by a picture of the female which is not quite so bright and has no breast streaking. 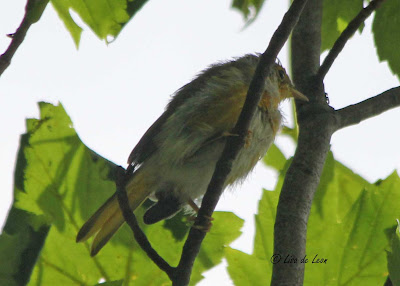 To some degree, the chatter among the Yellow Warblers has picked up again. There seems to be regular communication from the mature to the immature Yellow Warblers who are just now taking wing. 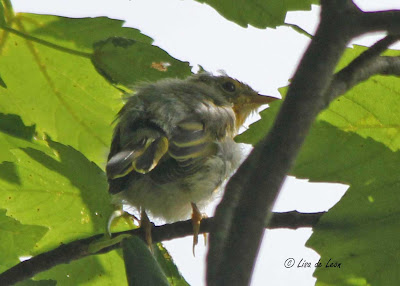 The young Yellow has a lot of gray and white fluffy, downy feathers as seen in these two pictures.  Gradually, the young bird will transition to full yellow as it molts away its baby feathers. It is a delight to watch the young as they awkwardly move about and welcome the meal delivered by the parents, but the "old" seem to be keeping the "young" tucked safely away among the branches and leaves.  It is difficult to get a good look at them. 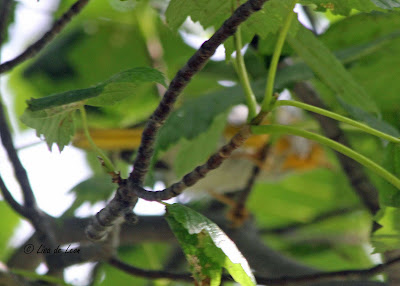 While engaging in this interesting interaction between the parents and children, up popped this mysterious yellow bird. No settings were changed on my camera, so that couldn't account for the contrast in yellows. Note the white belly on this bird. There seems to be a gray tuft remaining on the head. My best guess is that this bird might be is a "teenager" Yellow Warbler that has already gone through some of its transitioning to reveal a really bright yellow frock. In case I am wrong and this is a really rare bird, please post a comment.

Stopping to watch the most common sights can once again add insight to the bigger picture of the bird, its behaviour and its development.﻿
Posted by Lisa de Leon at 1:56 PM