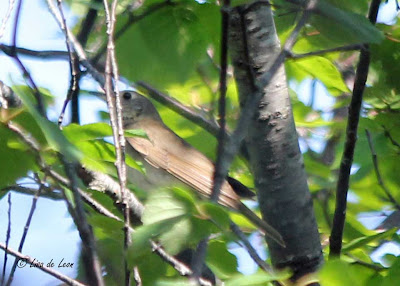 At last, a new bird!  Yesterday was the first time I have ever seen a Gray-cheeked Thrush.  Having been seen my others before, I had a clue where to look. When it appeared on the trail to La Manche Bridge, I was excited. Following the big moment of sighting the bird, then I had to try to get a picture.  Well, that was not easy! 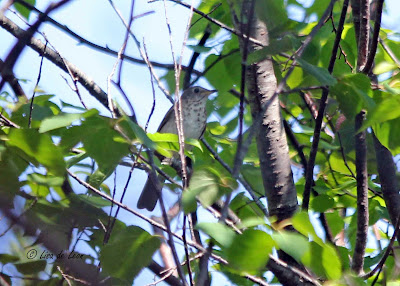 This bird moved around a lot!  It stayed high and far back every time it would fly across the three-foot wide trail.  It was impossible to shoot it in flight because the path was too narrow.  I just had to watch and hope for an opportunity.  With many blurred shots in my camera where I have only leaves and branches, at last I got an opportunity. It landed for just a few seconds in an area where the view was unobstructed. The thrill of getting the pictures is just as big as seeing the bird! 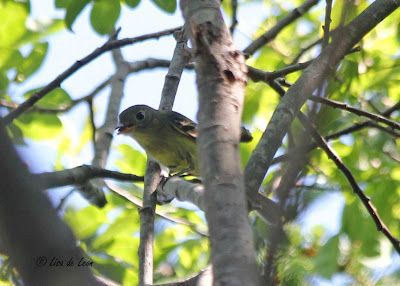 Complicating the process was this great little Yellow-bellied Flycatcher.  Every time a bird would move, my eye would follow. It seemed every time the flycatcher would catch my attention, I would miss an opportunity with the thrush. I guess you really have to be there to appreciate the flurry and at last, the capture.

Observation:  The woods are so dry the population of flies has dropped considerably.  We wondered yesterday if the absence of flies accounted for the small number of warblers around.﻿
Posted by Lisa de Leon at 7:22 AM