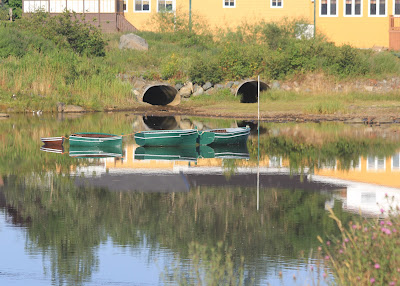 There is always a special excitement about a scheduled, full day of birding the Southern Shore.  I joined Catherine Barrett before 7 a.m. on Sunday morning, and we were off! It took great discipline to pass by many known-birding "haunts," but we did make it all the way to Cape Broyle before we stopped to get out of the car.  While there were only Greater Yellowlegs about, I stopped for a few moments to enjoy the four little dories, made with such care, reflecting in the still pool. 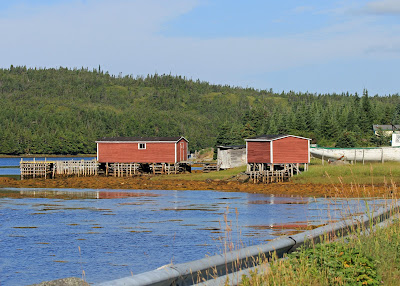 On to Aquaforte for a short detour down the shoreline.  Much to our surprise a Wilson's Snipe was standing in an area of gravel left exposed by the receding tide, and an Osprey hovered overhead.  Just at the end of the lane on the "landwash" were these two well-kept, red-ochre fishing stores resting on decade's old wooden supports. In a setting as natural as this, the calendar date could easily be 1950, not 2012. 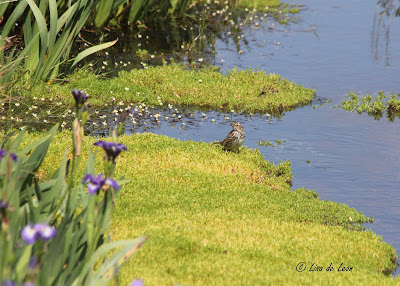 We had made fairly good time, despite our lingering at Renews where we welcomed several species of shorebirds back. By 11:30 a.m. we reached Cape Race road where we headed directly to Daley's Cove.  It was our hope to catch sight of some rare sea birds through the "Barrett Scope." On the way in the road, we were met with Savannah Sparrows everywhere. This one was perched in a cool area having a drink when we drove up.

By now, you may have noticed all of the sunshine in these pictures. It was a glorious day with temps in the low 20s and light, warm winds. It couldn't have been more perfect, except at Daley's Cove where the fog rolled in after about 15 minutes there. 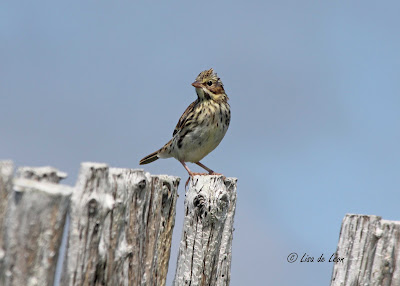 We packed it in and headed for St. Shott's. Catherine checked out the seabirds, and I headed for the field. There was nothing uncommon about the birds in either place, but the setting, the weather, the smell and the amount of "life" that surrounded us filled us up with the "bigness" of the day. 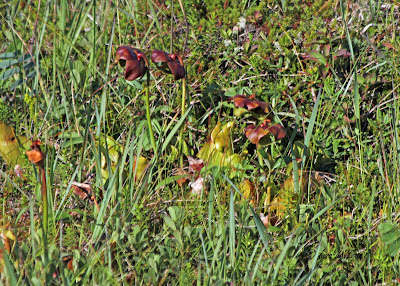 Pitcher Plants, often seen submersed in water, were standing tall like a provincial plant should in dried bog areas. 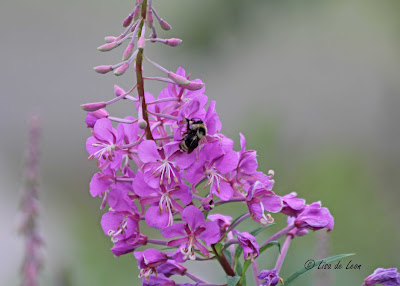 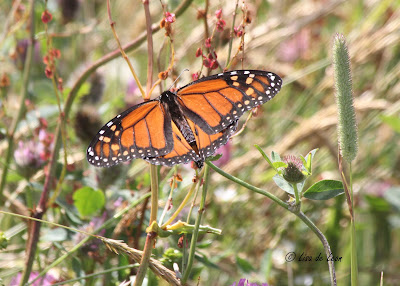 Wild flowers were abundant, along with all sorts of insect's, sans black flies. Away from the city's white noise and the absence of wind blowing around my ears, I could hear nature as it was meant to be heard. With all my senses on high-alert, I found myself wishing I knew the names of all of the different flowers, dragonflies and butterflies that surrounded us.

We came across two Monarch, three Painted Lady butterflies and at least two other types of butterflies that I didn't have time to track down for a picture. Oh, by the way, the farmer's crop at the hilltop in St. Shott's is thriving. 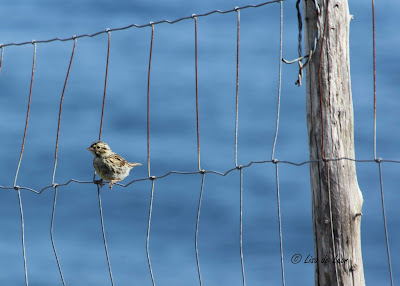 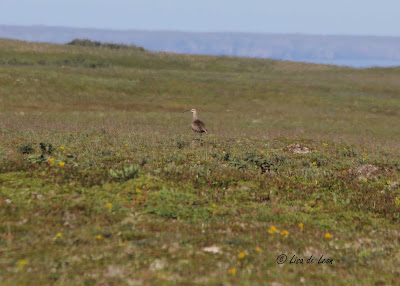 Time was running out quickly, and we had to keep moving. Next stop - Cape Pine Lighthouse. There was a small stretch of Cape Pine Road where the air filled with a naturally sweet aroma that should be bottled. While the Savannah were ever-present, there seemed to be little else in the way of birds on the road. However, just before we reached the lighthouse, two juvenile Horned Lark lifted off and settled back down nearby.  For me, it was my first look at a juvenile. Very interesting.                        The beauty of Cape Pine took my breath away.  I didn't even try to capture it with my camera; it would have been impossible. The gentle "blow" of a Minke Whale broke the silence. The flurry of Savannah's against this backdrop could have been set to music. At one point there were 14 Savannah Sparrows sitting on the row of fence posts, adding to the enchantment of the area.
Time evaporated at Cape Pine Lighthouse. Reluctantly, we headed out. Still awestruck by the impact of the land on us, we were pretty quiet for a change.  Then, a large bird flew in over us. It landed near the road, and we were delighted with having had the added bonus of seeing a new year-bird for both of us - a Whimbrel.
Undaunted by the day's birding, around 5:30 p.m. we headed for St. Vincent's. Remember that Royal Tern we missed twice? Well, we missed it three times. No Royal Tern today. 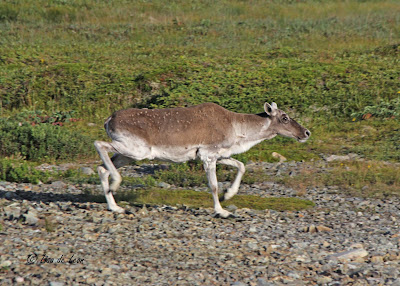 Time had surely gotten away from us.  It was nearly 7 p.m., and we were getting hungry. Thank goodness for the Trepassey Take-out. (By the way, the fried fish is terrific.) We ate quickly and headed toward the barrens. Thanks to Catherine's quick reaction, we dodged the bullet. This Caribou was standing dead in the middle of the road. It was amazing how it just seemed to blend in to the colors of the road and surroundings. 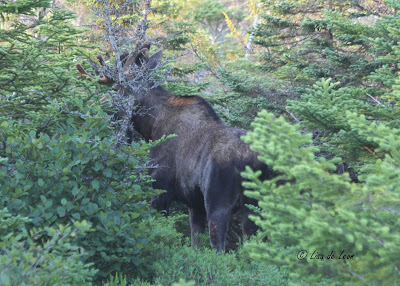 We thought we had done pretty good with seeing animals, having recorded a seal, a Minke Whale and a Caribou, but nature had more to offer. Again, great spotting, Catherine saw this bull Moose standing in the edge of the woods. Bullwinkle escaped! This moose was as big as the car; no, make that: "As big as a house!"  It was huge!  While I was standing at the edge of the road adjusting my camera waiting to get a full-frontal, I had a thought: What if this moose decided to charge me? I knew I wouldn't stand a chance, so I am left with only this hind view of it peaking at me through the tree.
We were heading home at a safe speed and had to make one more stop before the sun dropped. We ended up right back in Cape Broyle where we had made our first stop of the day. There were still Greater Yellowlegs feeding in the shallow waters, but once again my attention was drawn to our surroundings as dusk began to envelop us. 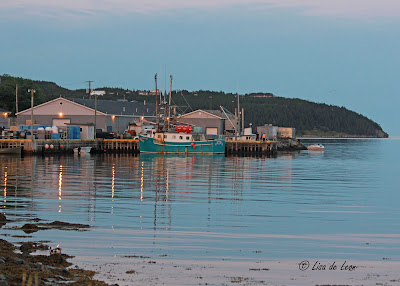 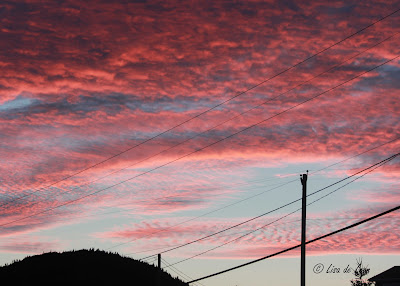 I turned around to see the stunning sky.  From the Rhyme of the Ancient Mariner, "Red sky at night; sailor's delight." Not only did this sky predict a good day ahead, but it was a proper ending to a beautiful day. On top of the sense of rejuvination the day brought, we also saw about 45 species of birds and visited locations we seldom see. 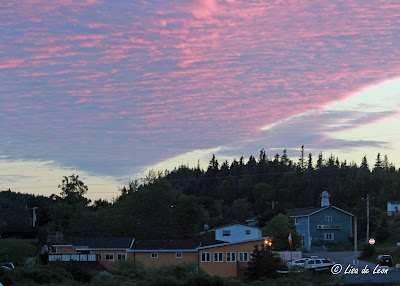 On the last leg of the trip, we spoke of how fast the day went. We had "birded" from 7 a.m. to 9 p.m. with another hour's drive ahead of us. The exhilaration of our Big Day of birding lifted all tiredness off our shoulders, and we both agreed if there were still more daylight, we could just keep on birding.﻿
Posted by Lisa de Leon at 7:22 AM