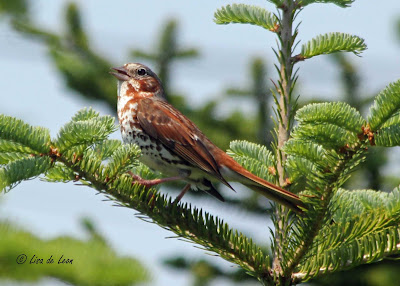 When I venture into the woods and trails time and time again, the only Fox I expect to see is a red feathery creature singing loudly in the tree tops.  The only danger typically related to this is that I might step in a hole when I have my eyes pointed upward in search of a special sighting. I really have been fearless, considering that when in Arkansas it is typical to carry a stick and beat the bushes as I tiptoe into off-road territory. 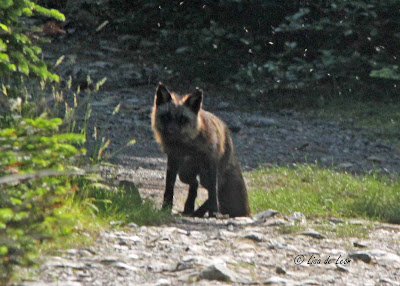 On Monday morning, Margie M. and I headed south to see what birds we could drum up.  Receiving a tip from Les S. and Keith F. that there was an odd song being sung at the beginning of the La Manche trail, we headed in.  Margie heard it right away, but I was straining to pick up the sound.  Not as intent on my ears, my eyes caught sight of this animal just down the trail. 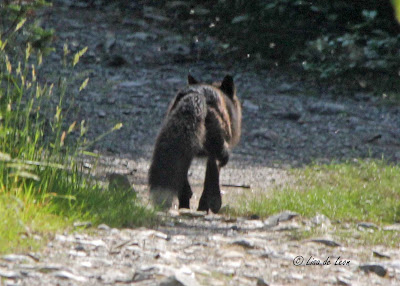 Within moments we were both looking at it as it was looking at us. Then, as we would expect, it turned to go the other way.  Is that a fox? Yep, it's a fox. Is seemed very dark for a Red Fox, but that is probably what it was. 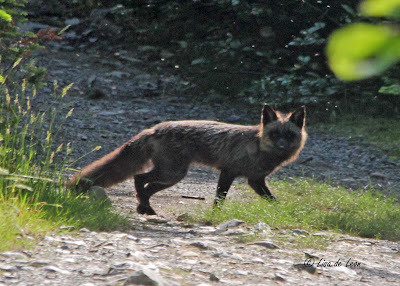 We were watching it head off in the distance and eager to turn our attention back to the singing bird, when our fox had second thoughts about leaving. It turned back around and looked at us. 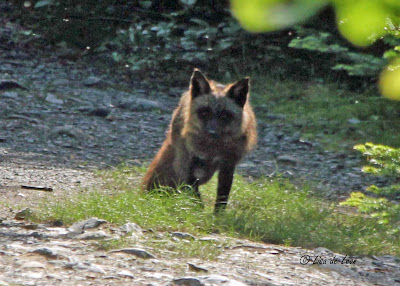 Then, to our surprise it decided to come closer. Uh.... this might not be a good thing! It settled into a low, hunting profile and started toward us. No, they don't do that... 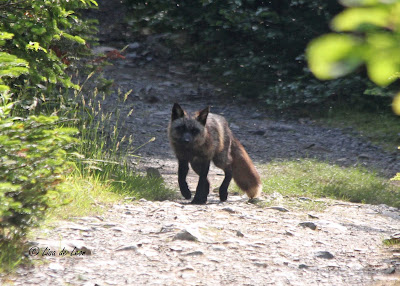 It moved to the left of the trail, keeping its eyes on us all the time.  We were just frozen in our tracks watching this guy stalk us. 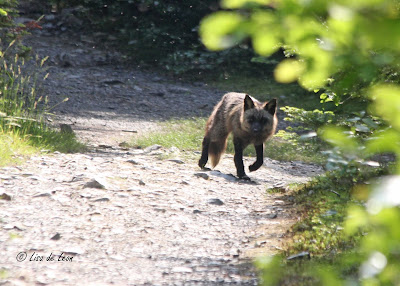 It moved to the right of the trail and just kept on coming. By now, we had begun to back up, slowly but surely, walk backwards, somewhat afraid to take our eyes off of the sly fox. 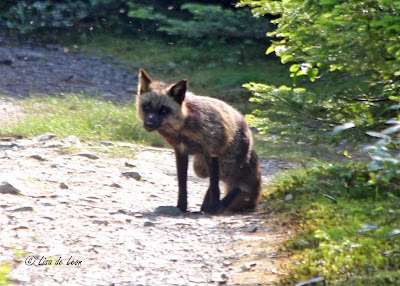 Then it stopped and settled it wily body into invisible starting blocks, ready to launch itself in our direction with speed and purpose. I think it was at that point that we knew this was not a casual encounter. We began to walk backwards more quickly. Where is that hole, I am sure to step in during our get-away? 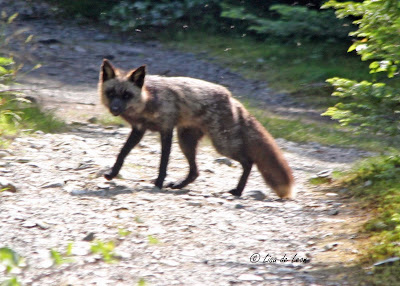 It got back on its feet and started to move closer walking on an angle to the side of the road. 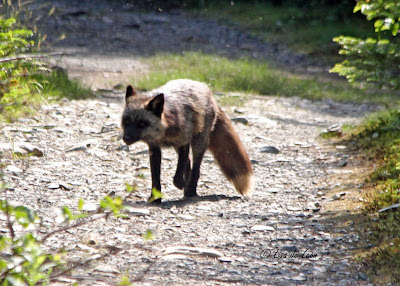 Then it turned toward us again, all the while slyly looking away. It reminded me of how Dave Brown suggested we approach a sitting snipe...don't look at it, walk side-ways or backwards and you can lull the bird into feeling safe. This guy seemed to be using the same tactic.

Well, it was at this point that I decided to think more about our safety than pictures. We were going to have to go!  When I looked back at Margie who was about ten feet behind me, there she was with a  six-foot stick in here hand. I was wishing she was in front of me! We were walking backward very quickly now, when at last the fox changed his mind and went the other way.  We were not fooled...he had done that before.  We froze in place and watched as this time, he did, at last, head into the woods.

Well, we listened for the target bird some more but with one ear cocked into the woods behind us, just in case our fox wasn't finished with us.

Why did this fox head toward us?  It is such unusual behavior unless we had encroached on some food source or encountered a protective mother.  In either case, I don't think we were welcome!﻿
Posted by Lisa de Leon at 8:38 AM