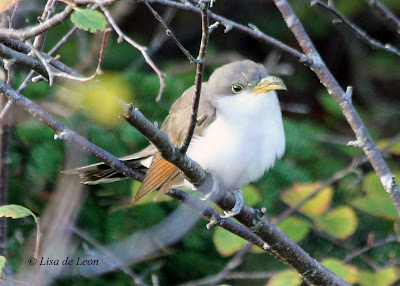 By comparison to the previous days of wind and drizzle, yesterday was a great day for birding.  The sun was out the winds were down and I was off in search of the Rose-breasted Grosbeak that I have never seen before.

The day was looking promising as I saw several birds flying high and in the distance.  At least the birds were moving.  On my drive up Blackhead Road I had the windows down listening for birds. 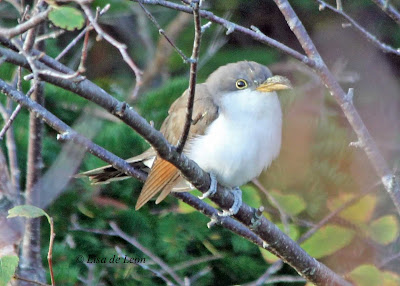 As I neared the turnoff to Maddox Cove, I actually did hear a number of birds. I knew there were Robins among the sounds but there seemed to be something else.  I found a safe place to pull off the road and began my walk back to the spot.  A number of American Robins begin to stir, some flew off and some sat atop the trees. I stopped and listened. I didn't hear the same sound that I heard when driving. 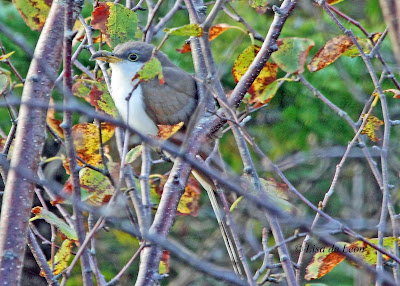 I paused and did some soft pishing to see if anything might show up, maybe a Rose-breasted Grosbeak. As I scanned the woods I was shocked to see the startling white breast of a Yellow-billed Cuckoo. This was a first for me.  I took a record shot or two and then began to work my way closer to this great bird. I couldn't believe my luck. 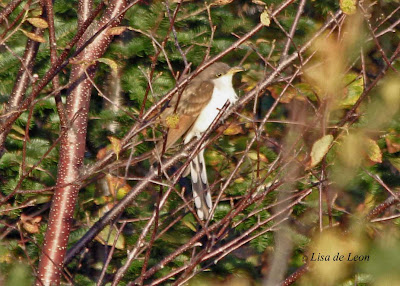 The Yellow-billed Cuckoo is so different from birds that we typically see in Newfoundland. Its brilliant white breast, it strong, curved, mostly yellow beak, the very long spotted tail and its sheer size is so striking. It was very calm and stayed in sight for the fifteen minutes that I was there. 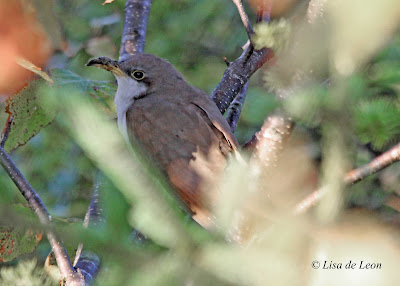 I really struggled with camera settings in an effort to get a good picture of this visitor. At times it was in the sun, then it wasn't. At times it was in the open and then it wasn't it. Added to all of this activity, I was trying so hard and working against time because you never know when the bird will just lift off and disappear.  This one didn't, and I didn't want to disturb it in the hopes that others would be able to see it. It was there when I left. I tried to call in the sighting as I would have stayed with the bird until someone else arrived but I couldn't get a signal. 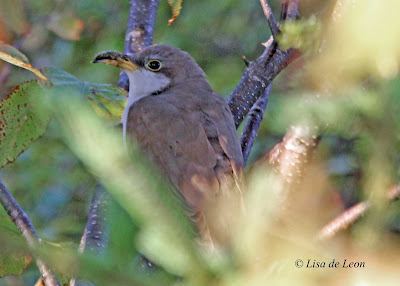 Central New Brunswick is the closest breeding range for this bird. With the winds that we have had several Yellow-billed Cuckoos have made their way to our island.  At least seven have been reported on the Avalon. Honestly, I really didn't think I would see one and this was such serendipity. 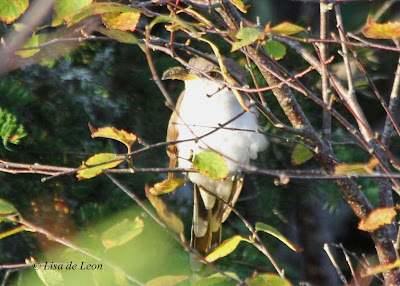 Once I saw this bird I already considered my birding trip to be a success and I didn't think I would see anything else special.  I continued to  the location where the RB Grosbeak had been sighted.  Before I could get there, a large brown bird flushed up from the side of the road and flew in front of me.  I pulled off the road and scanned the woods hoping to see what it was.  I waited for about five minutes when I heard a Quad coming down a driveway. Then, a large owl, probably a Great-horned Owl flew out in front of the machine and right in front of my car. Wow! That was a first.  The hunter told me that he sees lots of those birds on the trail when moose hunting. I tried to get a good look at it but, judging from the crow's racket it was too deep in the woods for me to reach. 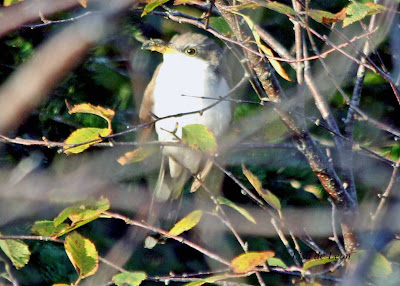 Well, two great events in one day!  I arrived at the playground where the grosbeak has been spotted. Just as I got there I saw a number of birds flying overhead.  Among them was a group of swallows. My only real experience with swallows has been the Tree Swallow so I assumed that is what they were.  I tried to get pictures but I didn't think that I did.

When I downloaded my images onto my computer, I found that I had one very grainy picture of one of the swallows.  Jared Clarke had suggested that the swallows most likely to appear at this time and location were Cliff Swallows. 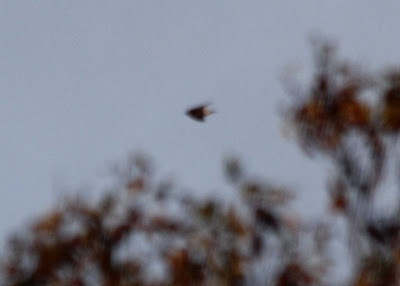 I began to look at the guide and compare it with my poor shot and indeed, it is a Cliff Swallow and I have yet another new bird for my day.

I waited at the playground for a while where I saw several Baltimore Orioles fly over.  Two landed atop a tree and another flew down in the alders in the playground.  A Sharp-shinned Hawk scattered all of the little birds for a while but they did come back.  In flew a bird that was a possible for the Rose-breasted Grosbeak.  I started taking pictures right away but it turned out to be a false alarm, a female Purple Finch.
For a half day of birding in a stretch of less than five kms, I had quite a morning of enjoyment and learning.
Posted by Lisa de Leon at 7:40 AM