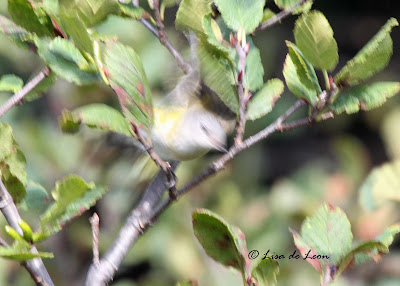 Try as I might, I cannot identify many of the birds I see. This gray, white and yellow bird is among the still unknowns. On September 2, 2011 Catherine Barrett and I birded the Southern Shore. Of course, Bear Cove Point Road is a destination of choice when looking for small birds.  About one-third of the way into the road, I snapped one shot only of this different looking bird. I have browsed through the warblers and flycatchers in several guides and cannot find anything that looks like this one.  This one looks really different from anything else that I have seen.

I checked the Discussion Group to see what birds were spotted by others in the same area near the same date. The two birds that I have never seen before that were reported were a Golden-winged Warbler and a Least Flycatcher. I revisited the pictures of those birds and they look very different from this one.  I'm stumped! 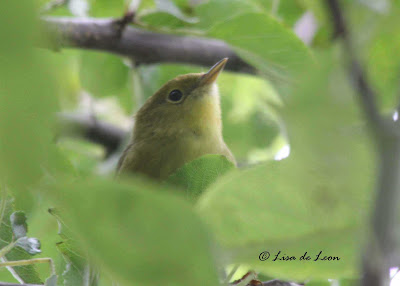 On September 5, 2011 Margie McMillian and I made another trip down the Irish Loop. As we were driving through Ferryland, this little yellow bird flew across the road and landed in a leafy tree near the road. We stopped right away and set out to see the bird more clearly. It kind of looks like a Yellow Warbler but the behaviour was very different.

It would not show itself at all. We pished and it didn't respond. This cat and mouse game went on for more than 30 minutes without getting any kind of look at the bird. 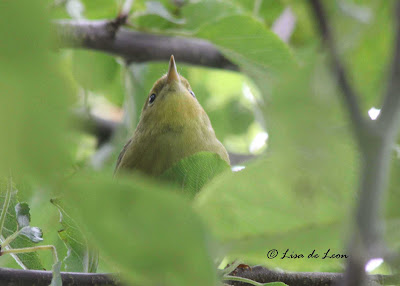 Finally, we got really low and pished on. I was practically lying on the ground shooting up through the leaves of the tree when I got at least these two pictures of this very secretive little bird. It amazed us that it stayed so long and hid so well.

There does seem to be some faint streaking on the sides, the throat is quite yellow, the eye ring is prominent but I find the beak to be somewhat long and perhaps a bit wide for a warbler. It is the behaviour and the beak that have stopped me from calling this a Yellow Warbler.

Any idea what these two birds might be? Even a hint to point me in the right direction would be appreciated.
Posted by Lisa de Leon at 7:38 AM