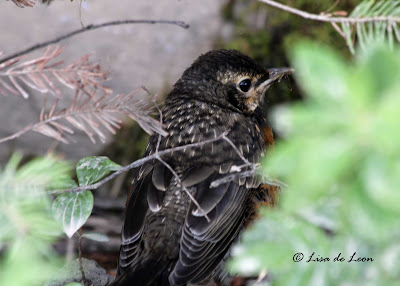 I have spent a lot of time birding this summer. Rain or shine, wind or no wind I have been out there. This has given me the opportunity to see a lot of different birds and a lot of juvenile birds. I must have been birding with my eyes closed last summer because I don't remember seeing so many young birds then.

The whole gamut of juvenile birds have some very similar behaviour. They are very curious and not so bothered by human presence which makes it quite easy to study them. They are also very responsive to pishing. 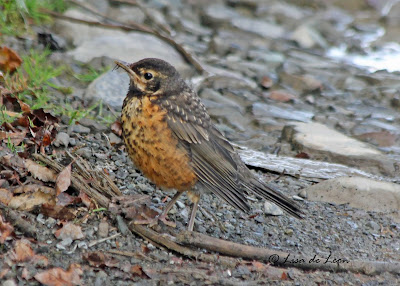 Their plumage is different from their parents. In some cases such as the Cedar Waxwing posted last time they are totally different from the adults. In other cases like the American Robin the juvenile is different but it is still very much like the adult bird. The red breast is the clear giveaway. It is interesting that the young birds become the size of an adult very quickly but their behaviour as well as their plumage clearly separates them.  The flesh color at the base of the beak is also a clear indicator of a juvenile, as well.

They are playful and will play with birds of other species. They are clumsy often losing their footing or are unable to land on a target branch 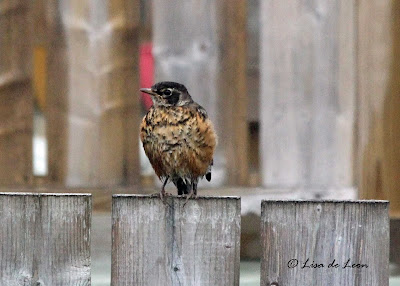 . It sometimes takes them several tries to lift off and land as they are just getting used to flight.

Even when soaking wet the juvenile robin is unmistakedly a robin despite  its speckled breast. 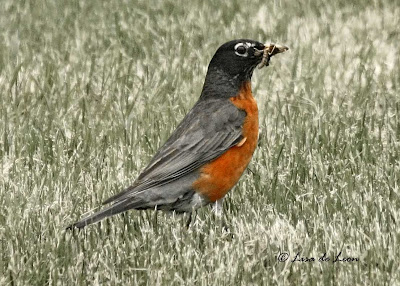 It won't be any time before the young will evolve into a fully red-breasted adult able to fend for themselves and to land on a dime in order to feed on a lawn meal. I guess the American Robins will be moving on soon and will likely not return until late winter to feed on remaining berries, of which there seem to be a lot this year.

Note:  There have been a lot of American Robins around the St. John's this year.
Posted by Lisa de Leon at 8:37 AM