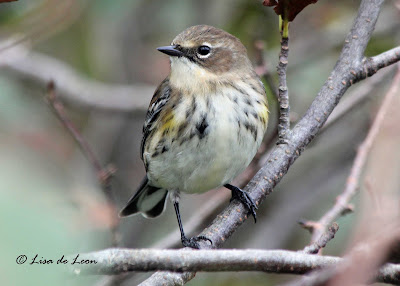 There were times when I found myself in the middle of a patch of woods with Yellow-rumped Warblers swirling around me everywhere. During this time I took many pictures and today, I present you with a bouquet of Yellow- 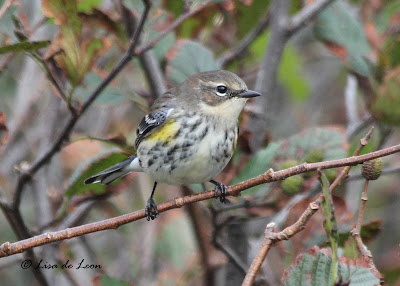 The many pictures have enabled me to share images of  YRWs that have different plumage but still maintain the telltale markings of this species.   The Yellow-rumped Warbler is quite easy to identify for several reasons and learning these features can help when trying to identify other warblers.   I was recently told by a birder that he uses the Yellow-rumped Warbler as the ideal warbler to which to compare all other warblers. Hmmm....a Gold standard. When seeing a different warbler he questions: Is it bigger than a YRW?  Is it smaller than? Does it have an eye ring? You get the picture. 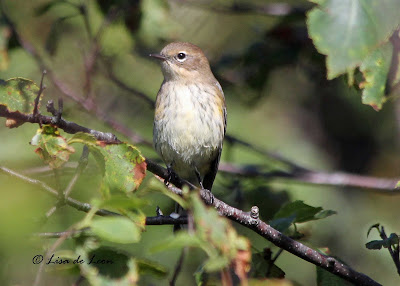 This encounter, as well as Dave Brown's hint that the distant bird in my far-off photo posted a few days ago was a Yellow-rumped Warbler, got me thinking. I should have been able to identify that bird myself since I have seen so many YRWs all summer.

It is now time to pull out my copy of "Sibley's Birding Basics" that I bought two years ago. At that time the "read" was not that engaging. Now, that I have a little more knowledge and experience, I find it not only engaging but an excellent resource. Jumping into detail really is all about my level of 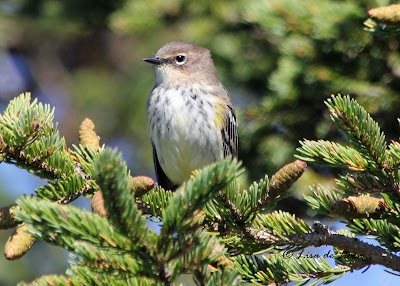 You see, for years I immersed myself in academic reading and developed the ability to retrieve data from my brain as the need arose. I don't have to do that anymore, and I choose not to learn about birds in this way.

Perhaps it is the ageing progress or just a little rebellion that I have chosen discovery and experiential learning to collect the information about birds on a need-to-know basis. Unfortunately, experience cannot totally replace the need to study written resources. 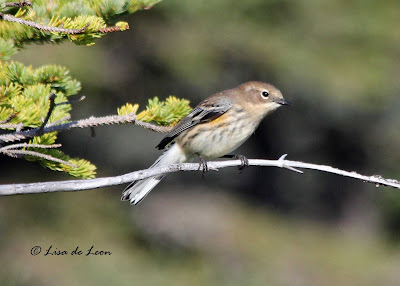 The time has come for me to learn the nomenclature and attempt to speak in a vernacular that is common to birders everywhere. I'm sure that I will err along the way but I am open to correction.

Having said all of that, I began to develop my own checklist of field marks of a YRW.  As basic as it is this approach helps to develop a strong foundation.  I have chosen to dissect the winter female and juvenile plumage as shown in my pictures.

1) The YRW is 5 to 6 inches long, putting it in the medium size warbler group.  Another resource says  it can be up to 8 inches. I think that may apply more to the Audubon more than the Myrtle.

2) The YRW has a very bright yellow rump.  (Only two other species of warblers have a yellow rump: Cape May and Magnolia). For me this has been one of the easiest ways to identify the YRW. As soon as I catch sight of the yellow rump, I know the odds are with me. 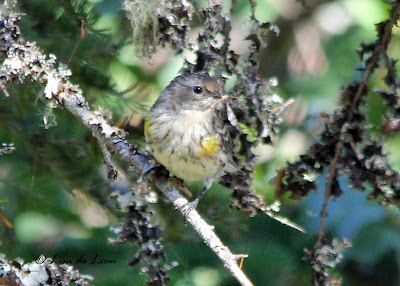 3) The Myrtle Yellow-rumped Warbler (which is the species that frequents Newfoundland) has four yellow patches. These include the two side patches, the yellow crown or cap and of course, the yellow rump. This and the preceding pictures seem to be of immature YRWs even though they look quite different. On the one above the yellow side patch is not yellow but a buff color. (There is no color alteration in any of the pictures.)  The little bird in this picture has a less distinct eye ring and the color in the loral area is different. Experts say that color is one of the least reliable field marks used to identify a bird because the plumage is so variable during maturation and the regular molting of each bird. 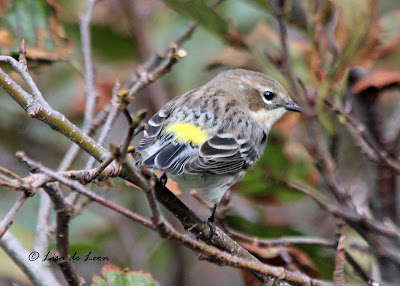 4) The adult bird has a broken eye ring. (I will venture a bold statement that I could not find in resources. I think the Yellow-rumped Warbler is the only warbler to have a broken eye ring.) Some warblers have no eye ring, others have narrow, wide, white, yellow or other color eye rings. Noting the eye ring is another quick way to identify this bird.


5) The lores on an adult bird are black. 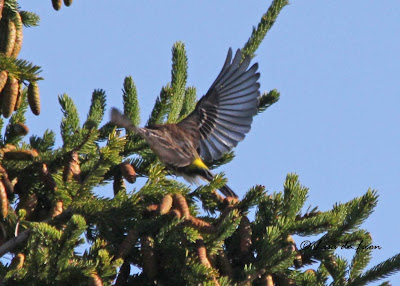 Many a time I have just seen the rear of the bird as it flits by or springs from branch to branch among the leaves. Even speed and camouflage often cannot hide a flashing  yellow rump. 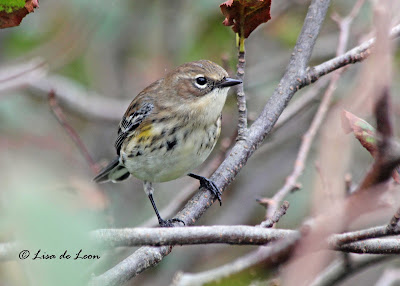 6) The Myrtle YRW has a white throat while the Audubon's YRW has a yellow throat. While the Myrtle Warbler is the bird we most often see here in Newfoundland, there has been at least one record (maybe more) of an Audubon's Warbler in in this province.

The Myrtle is the Easterner and the Audubon is the Westerner. 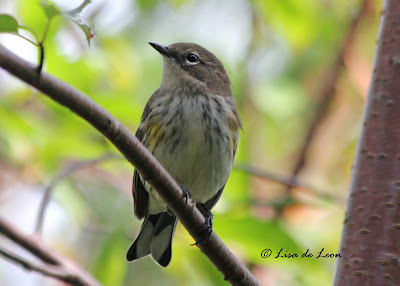 7) The immature and the fall YRW have a lot of brown and the white throat is not pure white.  In the shots of this bird the throat appears to be buff.

8) Streaks frame the white breast. The belly, flanks and vent are white. In some resources the area underneath the tail is called the "vent" and other resources call it the under tail coverts.

9) The underside of the tail has  markings of black and white. I have used these very distinct tail markings to identify the YRW when I was unable 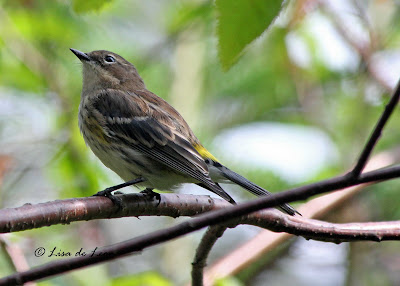 to see the rest of the bird among the leaves and branches.

10) The mature bird has a white line above the lores and the eye.

13) The beak and legs are dark gray or black. 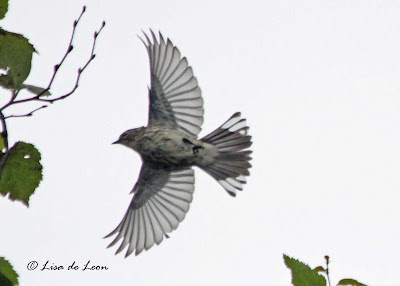 14) There are three white spots on both sides of the outer fan-shaped tail.  I usually don't see these spots when I am in the field because the bird is so fast but I always try to get a shot of each bird in flight if possible. There are usually clues to the identity that can only be seen when in flight. 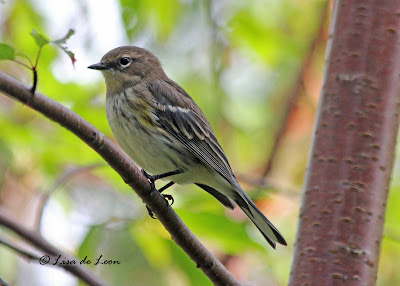 I will never tire of looking at this species. The Yellow-rumped Warbler is a beautiful bird, both male and female. Its field markings are very distinct and unique.
Making an on-the-spot  identification  requires the ability to recognize numerous field marks quickly and accurately. This comes from meshing a collection of clues to arrive at an accurate conclusion. This skill is developed through familiarity and practice. It is somewhat like holistic reading which is used in "speed" reading. If one can recognize the beginning, middle and end of a word formation or a familiar phrase then the sentence can be read without consciously having to look at every letter or even every word. It seems to me that I need to develop a similar capacity to see and note characteristics quickly and holistically to form an understanding of a pattern  of the whole bird without having to go through a checklist. This is not rocket science, and I am not the first to arrive at this thesis but it will be my new approach to the challenging nature of identifying birds. In the meantime, I remain very appreciative of those who have helped me with bird IDs all along the way.

The many pictures that I take will continue to reinforce the study of  field markings that will hopefully lead to a greater ability to know what I see when I see it. Unfortunately, the song bird season is just about over. Over the last week I have not seen one Yellow-rumped Warbler and few sparrows. Is it any wonder that I am already looking forward to Spring 2012?
Posted by Lisa de Leon at 7:46 AM