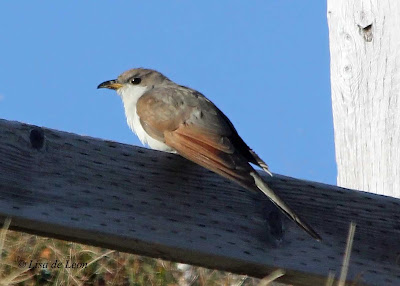 Sometimes I set out to find a bird that has been reported. More often than not, I come up empty-handed. It just seems that when I put myself out there in potentially "birdy" places, the most unexpected bird turns up. Not once, but twice!

This happens a lot. I go for a period of time that seems like forever not seeing a bird that I want to see. Then, once I see it the first time, I just keep seeing it again and again.  This was the case with the Blue Grosbeak. I kept looking for that bird and now in a short span of time, I have seen it four times. Each time it looked different, but that is for another post. 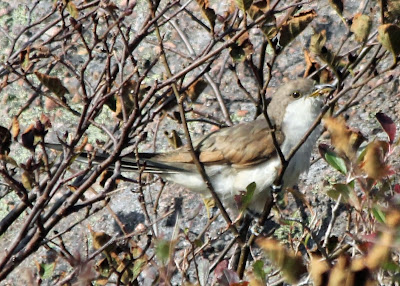 While having a morning stroll around Cape Spear hoping to see a Lapland Longspur, I spotted a bird that disappeared over the edge of the cliff.  I got closer really expecting to see an American Pipit but I couldn't relocate the bird. I moved on when I caught a flash of white flying low over the short brush covering the hillside. I couldn't believe my eyes when I finally got a good look. There it was again...the Yellow-billed Cuckoo!  I had only seen my first one about ten days earlier. 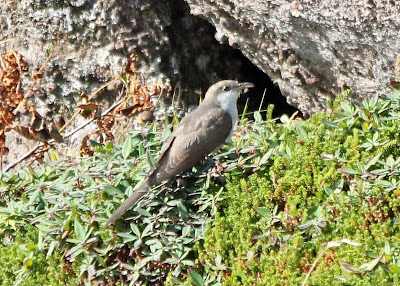 This was a great opportunity to watch its behaviour in a different terrain. When I saw it last, it was sitting about mid-way up a tree. This time it was ground dwelling. I watched as I continued to walk toward the lighthouses. It moved just ahead of me, always keeping a safe distance. 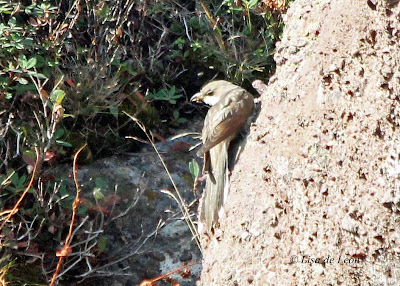 Then I got a surprise, it latched on to a side of a rock using its long tail to help maintain a grip, much like a woodpecker. That was very different from what I expected. 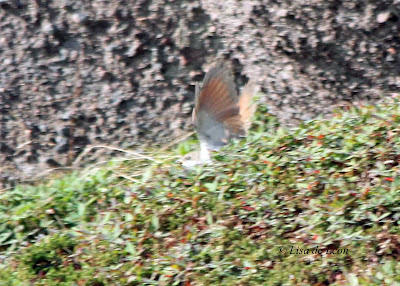 Then it let go of the rock and flew right in front of me.  This picture is so blurry that it hurts my eyes but I uploaded it because this is the only shot that I have that shows the great tawny color under the wings.

I have now seen this bird twice and its behaviour was very different both times.  I wonder how many times one has to see a bird to really develop an understanding of its habits.  Fortunately, the field markings of this bird are so distinct that there was no mistaking it for anything other than what it was. Yet, if this had been one of those confusing fall warblers that look so much alike, I would have been convinced that it had to have been two different birds because of its location and behaviour.

I continued my walk up the hill and this great bird led the way for a long time until it finally branched off onto a secondary trail at the Cape.

Nope, I didn't see a Lapland Longspur and still look forward to that opportunity but my morning definitely was not dull.
Posted by Lisa de Leon at 8:44 AM