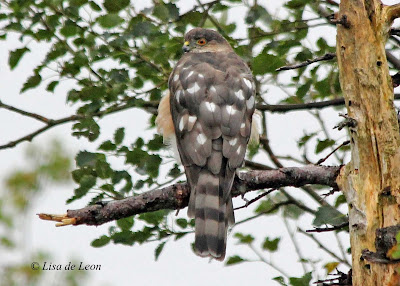 For the last two days while out birding I have watched as a Sharp-shinned Hawk swept in and scattered the little birds into hidden nooks. The behaviour of this bird is quite different from the hovering, scouring buteos.  I have never seen this bird circle overhead looking for its prey.

This is a swoop in, grab the prey and fly away kind of guy. They just appear in front of you quickly in pursuit of a small bird and then they are gone. Sometimes they will lurk on a branch and just wait, usually somewhere near a feeder. 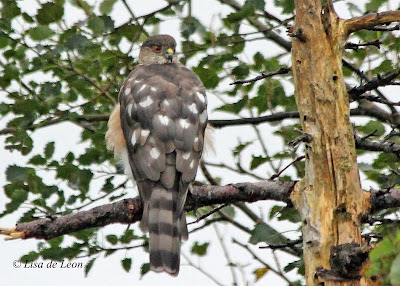 Yesterday, another birder and I were watching a group of five Blue Jays enjoying some bird seed left behind.  They were having a great time and demonstrating who among them was the most dominant.  It was an interesting scene. Then, all of a sudden they all flushed and hid away.  There was no obvious reason. Then, within 30 seconds in swooped a Sharp-shinned Hawk. The jays knew well in advance of its arrival. 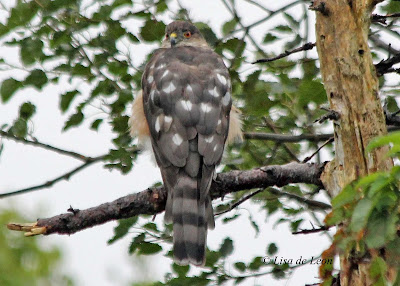 The hawk flew low into the bushes and it was quiet for a few moments. Then, with a burst of purpose it rose into the air and pursued one lone Blue Jay that was perched atop of Spruce tree. The hawk reached the top of the tree before the jay reacted and then there was a bit of confrontation where the jay escaped and the hawk flew off empty handed. 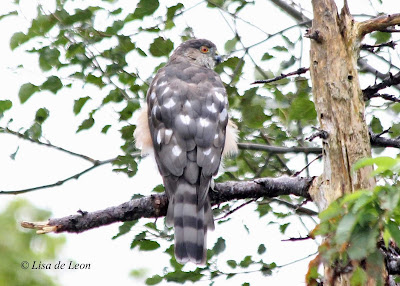 It was interesting because I have read that the Sharp-shinned Hawk is about the size of a Blue Jay. Well, based on what I saw yesterday as I stared at their silhouettes while they struggled, that just wasn't the case.  The hawk was much larger. 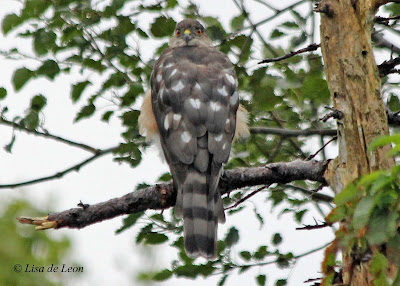 Not particularly thrilled about how the Sharp-shinned Hawk behaved yesterday, I thought about this group of pictures that I took from my deck on August 31st.  On this day the "sharpie" was much more endearing.  It flew in early in the morning and sat on a dead tree and stayed for quite a while. 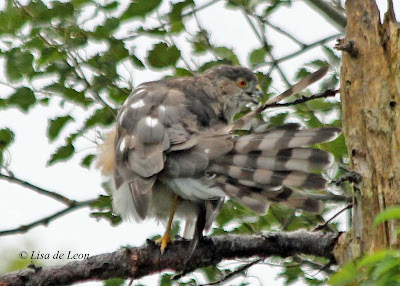 I watched it for over fifteen minutes.  First, it scanned the area and then in its comfort zone it began grooming.  It was not at all threatened by my looking on. However, it did stare at me a few times but I guess it decided that I wasn't meal size and went on about its business. 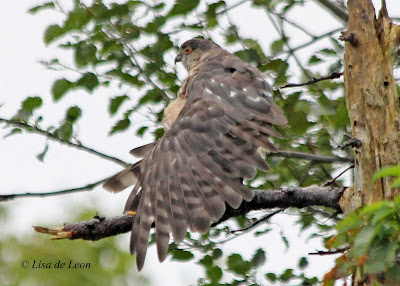 It is just the cycle of nature that the Sharp-shinned Hawk dines on smaller birds but it doesn't make it any easier to see it snatch a little bird out of its prime.  I witnessed this last year as one hawk snagged a Purple Finch.  I have also seen a Northern Goshawk snatch a European Starling and a Bald Eagle rip a Common Eider right out of the water just feet away from me. 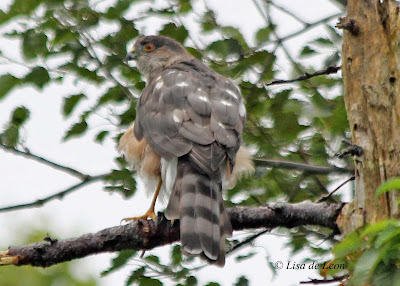 These sights are fairly common and can be seen most anywhere at anytime. Despite the difficulty of watching these grab and run events, it is quite awesome to watch the power of birds of prey.
Posted by Lisa de Leon at 7:14 AM