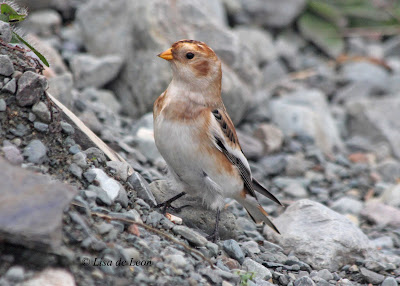 Even on a gray, foggy, misty day, this little bird stands out in its non-breeding plumage. A week ago today two other birders and I were enjoying a fairly warm day birding around the Southern Shore.  We were standing on the edge of Bear Cove Beach surveying the shorebirds that were barely visible in the fog when all of a sudden in flew this little Snow Bunting. 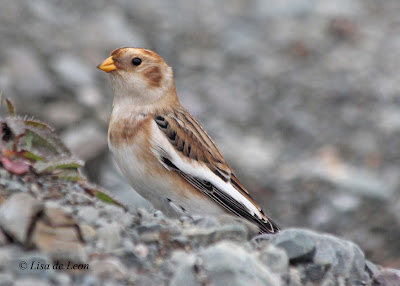 At any time this little migratory bird is always nice to see but by contrast to the conditions and the shorebirds, it was a stunner. Its rusty colors mixed with black and the amazingly white streak beginning at the shoulder and running down the wing made it as real standout. 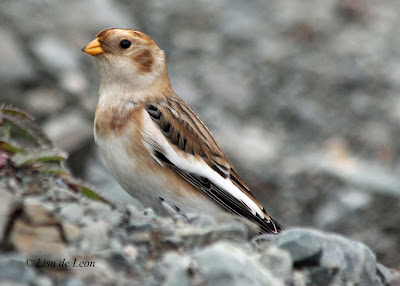 This little Snow Bunting seemed to like us. It took its time but is began working its way toward us and was so close at times that it was impossible to get a clear picture with a telephoto lens.  It was not bothered by our movement or talking.  This is very unlike Snow Buntings that I have seen in a flock in Portugal Cove South but very similar to the behaviour of Snow Buntings that have gathered at Cape Spear. There, they can often be found on the boardwalk and will stay just feet ahead of walkers. 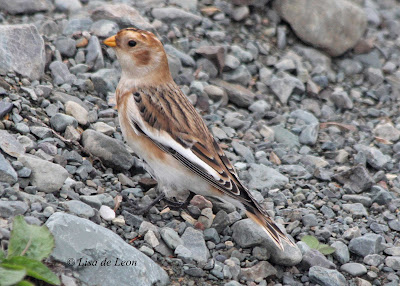 This migratory bird winters in Newfoundland and may well be a common sight throughout the months to come.
Posted by Lisa de Leon at 9:20 AM