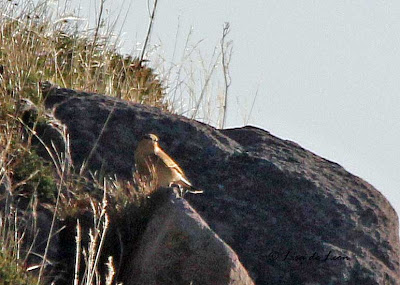 The wind is ripping, my neighbor's cat is clinging onto the door knob begging to get in, my BBQ cover (third one in four years) is taking a terrible beating, one lawn chair on the deck has flipped over, one very disoriented, huge bull moose just strolled down Airport Heights Road,  and all of that seems inconsequential. All I am thinking about it what rare birds are being blown our way.

The high winds of Fall have already brought in a few rare birds and among them is this Northern Wheatear. This is a bird that could have easily never been found as tt was hanging around the rock face of the Red Cliffs in Logy Bay. 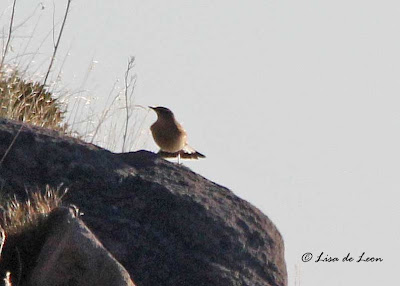 When I read the post on the Discussion Group, I decided to set out to find the bird. I have never seen a Northern Wheatear so I guess the 1.5 km uphill hike (one way) was not that bad.

When I arrived at the Red Cliff, I found Mike Parmenter who had just located the bird and waved me in.  We moved into the best possible viewing spot and there it was sitting on the edge of a cliff quite some distance away. Even the binoculars against the back light caused by the rising sun could not offer up a good look. 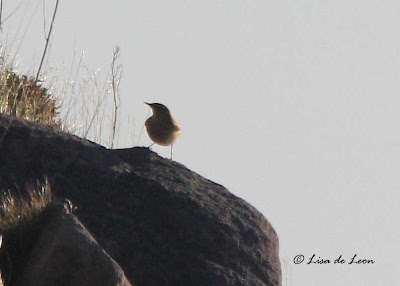 This little bird was very flighty. It couldn't seem to stay in one place more than a few seconds at a time. This is when having the camera is a great help. By enlarging the poor, distant images, I can actually get a better look than through the binoculars.  All in all I think we were able to see the bird for only about two minutes. It took a while to confirm that it was indeed the Northern Wheatear but when it flashed its white and black tail, we were sure. 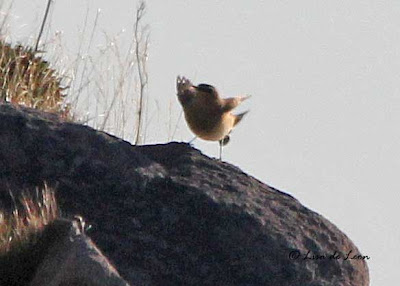 This species of bird breeds in the north, way north, and then travels either by an eastern or western route to arrive in Africa where it winters. At one time the Northern Wheatear was  considered to be a member of the thrush family but more recently, it is thought to be grouped with the Old World flycatchers.
Now why would I include a picture of the Logy Bay castle?  Well, sometimes I have trouble finding the location of birds. I "googled" Red Cliff Road and it indicated that it was on the right after the Marine Lab. The description on the Discussion group reported a gate, a trail and then a paved section of the trail and a left turn in the trail. Knowing the roads are often poorly marked in Newfoundland, I came upon a turn off 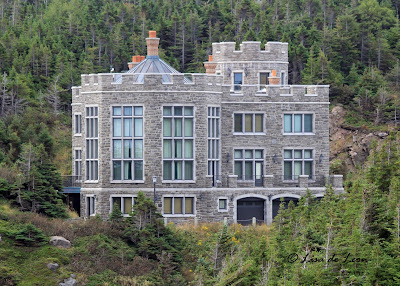 that had a gate. I stopped and started walking. I came upon a paved section and a fork in the road. This seemed right. I mean, after all, how many trails have a paved section?  It had to be the right place. I walked the trail for a long, long way. The path began to narrow and what was at one point a road-size trail became a foot path. I was getting very close to the edge of the cliff and the wind was not being kind. I finally realized that this could not be the right place.
On my return hike I was very surprised to find the Logy Bay Castle rising up out of nowhere, tucked into the hillside. Eventually, I got close enough to get a full view of the secretive building and could hardly believe that it had been at my back during most of my hike. I was not disappointed with my extra hike but I think this made the second walk seem so much longer.
I should mention I was really pleased to see the Northern Wheatear on my first try because last year I travelled to Cape Spear when the bird was reported and was not so successful.
Posted by Lisa de Leon at 7:31 AM