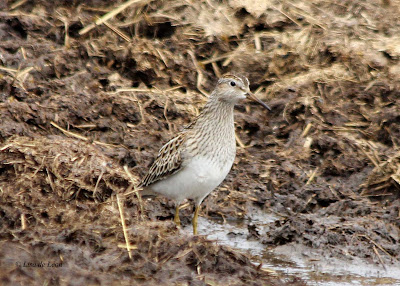 Two days ago another birder and I went out in search of Fall birds. We did happen upon a couple of very active areas with common birds but didn't see anything out of the ordinary. We checked several places and were on the end of the trip when we took a dart into one last possible location.

When we drove up, we spotted a small flock (about ten birds) of shore birds spinning around the area.  We decided to sit in the car and give them a chance to land. 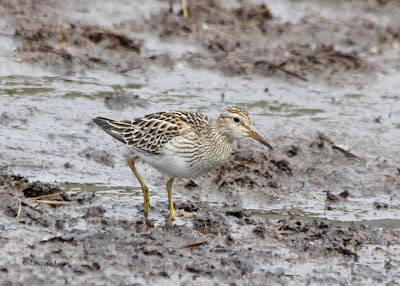 They did and then we inched the car quite close to the flock to get a good look. None of the birds was bothered by our presence and went on about their business in the large pile of manure. 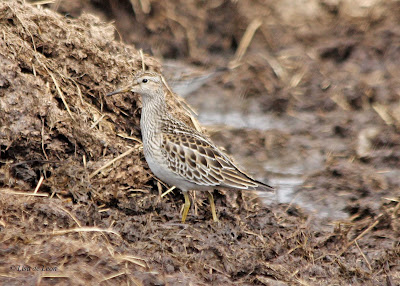 Among them were two birds with yellow legs and yellow at the base of the bill. We didn't know what they were, only that they were uncommon. We did a lot of looking, taking pictures and flipping through the bird guide. 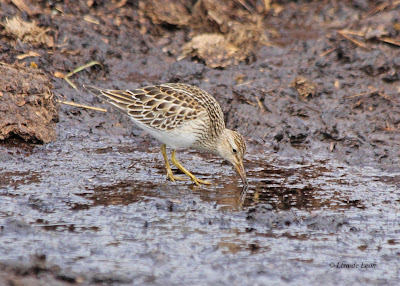 It was our good luck when another experienced bird appeared on the scene and identified the bird. Well, needless to say, I felt somewhat "stunned."  I have a file folder full of grainy, dark images of a Pectoral Sandpiper taken at Second Pond. The pictures did not serve as a good learning tool because they were too dark. Nevertheless, I had spent quite a lot of time looking at the Pectoral in the field guides and here I was totally unable to identify the bird. 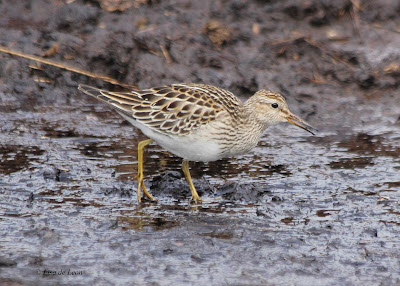 Sometimes this whole identification thing can be so daunting. Just when I think that I can safely say that I will know this bird when next I see it, I am unable to do so. The hope lies in the fact that this is really only the first summer of studying shorebirds and hopefully, I will do better next year.  I must say it is a very new experience for me to be wrong so much of the time. 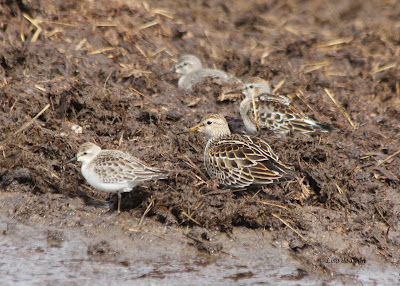 This time we were able to watch some of the behaviour of this bird. When a couple of crows flew overhead, all of the shorebirds gathered together and hunkered down where their natural camouflage hid them from sight. They chose this method of evasion rather than taking off in flight. 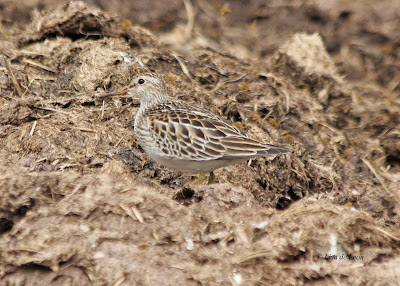 Even watching the same bird in different light and different postures, it would look different. That is why an opportunity to sit and watch them in a variety of stances and circumstances will help in the future.  There were times that it looked really big such as when it was standing up and times when it looked very small when it was crouched. (The Pectoral Sandpiper is only 8 to 9 inches from head to toe.) 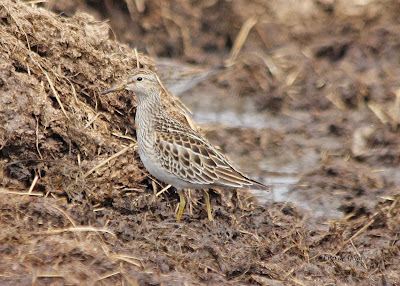 It was also beneficial to observe how different the bird looked when it was at a distance and when it was close. Actually, when it was far and being viewed through the binoculars, it looked quite big. Then it would move close where viewing with the naked eye was possible and it looked so small.   From the back its stripes looked very similar to a snipe but the length of the bill makes it easy to eliminate snipe from the possible IDs. 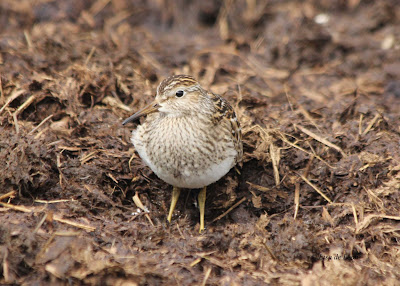 There is heavy breast streaking that is not that dark in the Fall. I can only guess if I ever see this bird in breeding plumage, I probably won't know what it is again! I do believe that the distinct bill and yellow legs remain even in the breeding season so this is what I will have to go on.

This is a relatively uncommon bird here so it is not likely that I will get this kind of training opportunity anytime soon. There have been several Pectoral Sandpipers spotted on the Avalon over the last three weeks or so. They should all be heading to Mexico soon which is where they will spend the winter. That sounds like a great plan to me!
Posted by Lisa de Leon at 9:22 AM