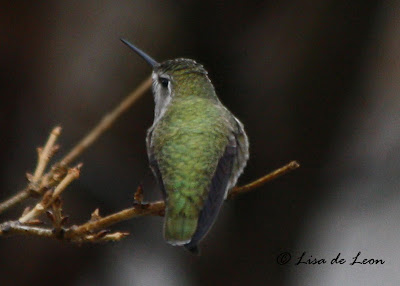 It was the most unexpected posting on the Discussion Group. An Anna's Hummingbird had been reported at a feeder in Brownsdale since June. The residents were unaware of the significance of this little visitor and did not report it until last Thursday. By Saturday a caravan of birders was on the Trans Canada Highway en route to Brownsdale (178 km) from St. John's. 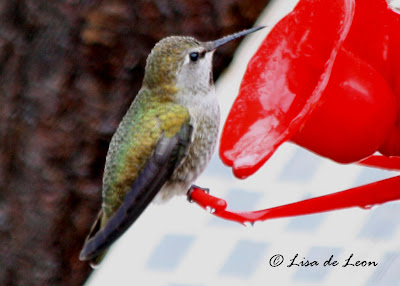 The day for my birding partner and I started at 6:00 a.m. There were about 2 inches of slushy snow on the road compounded by heavy rains, much more than was forecast. Inching our way through the trenched slush, the darkness and the clicking windshield wipers, we were resolute in reaching our destination. 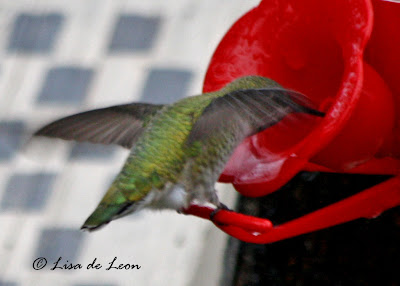 Finally dawn brought better light and the rain eased off in fits and starts. We figured the worst was behind us. Then we ascended the hills toward Brownsdale where the elevation impacted the amount of snow. There was more snow and slush and this proved to be one of the more treacherous stretches of road. Slow and steady we reached Brownsdale where it was dark, dreary and sprinkling. 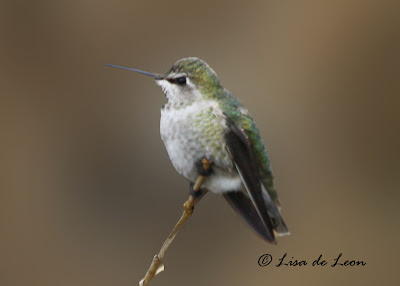 The resident keepers of the Anna's Hummingbird were expecting many visitors today and they greeted us at the door. With an invitation to view  the bird from inside the house and an offer of coffee to warm us up, we were poised to watch for the surprising visitor to Newfoundland, an Anna's Hummingbird. 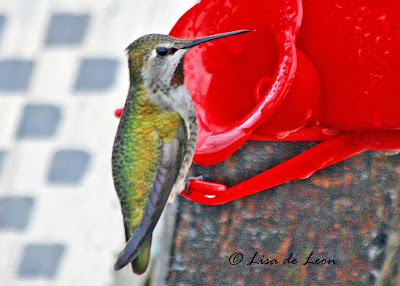 In about ten minutes in flew this amazing three and one-half inch giant of a bird. It looked healthy, ate with vigor and seemed very well adjusted to the winter. It was real and it was here. The Anna's is a west coast bird found mostly in southern California and Mexico. What in the world is it doing here?


CBC's website posted a video of the busy little hummingbird that is quite spectacular. Modern news these days now opens communications with the public to post their opinions. There were some naysayers that suggested that this bird was brought in or that it hitched a ride on a transport truck, or the like. Another speculated that it was odd for someone to have a hummingbird feeder out for such an 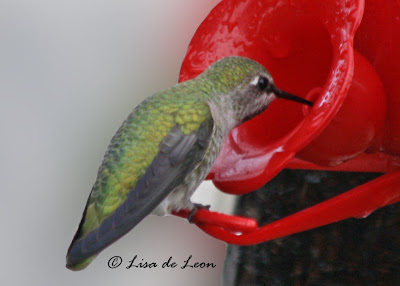 unexpected bird.
Well, I can speak to the mystery of the feeder. It seems that this bird showed up in June and spent the summer feeding on the many garden flowers in the area. Once the hummingbird stayed around for a while, two houses (sisters that live across the road from each other) both put out hummingbird feeders. This little bird has frequented both. Now, I have heard that in an effort to help this Anna's survive the winter, they are alternating feeders to ensure that there is always food 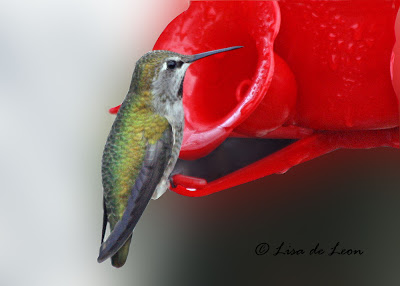 available.
How rare birds reach our shores will always remain a mystery, but I would put my money on it being one of those natural phenomena that leaves us in awe. 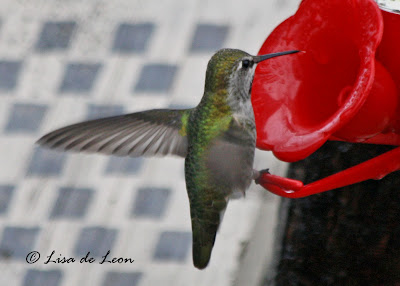 There is inspiration to be drawn from the tenacity of a 3.5" bird making the journey and scraping out a survival from nature and nurture to spend the winter in Brownsdale, Newfoundland. 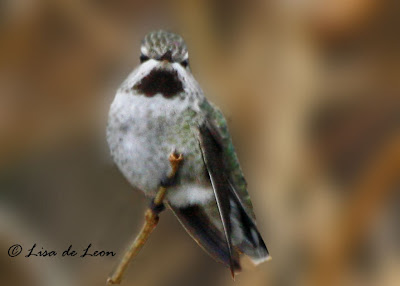 Within 45 minutes of our arrival in Brownsdale, seven other birders arrived filled with amazement and excitement. I can only guess but I imagine many other bird lovers showed up later on Saturday and Sunday. The warmth extended by the host family helps me to understand why this little Anna's Hummingbird has moved in to stay.
Note the last picture: The throat of the Anna's Hummingbird is actually iridescent red and the texture is much like scales. In some light, the throat looks quite dark, but when it turns in a particular direction, the red pops. There are very small red dots on the head suggesting that this is an immature male. My pictures are disappointingly blurred but I guess that is just the rain in its eyes and on my lens.
I should add: This is a record "first" for this bird in this province.
Posted by Lisa de Leon at 10:06 AM