The Return of the Yellow-legged Gull 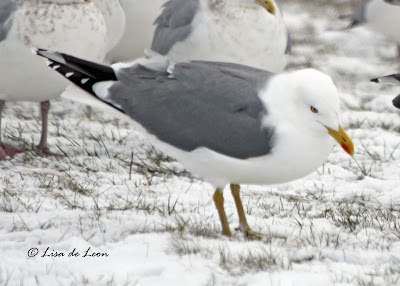 Gull identification is very difficult. Even when I think I know and can recognize a gull, up pops some variation to add to the confusion. Well, this time I am 100% sure! This is a Yellow-legged Gull. 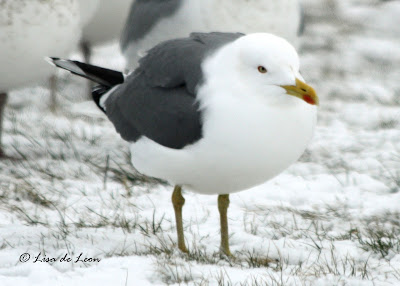 I have spent quite a bit of time this winter searching for the Yellow-legged Gull. On two previous occasions other birders pointed it out to me. I looked, photographed and returned to my computer to study. Today, with the on-going help of two very knowledgeable birders, I am sure that I found the Yellow-legged Gull all by myself! When I saw it, I thought this one seems so clear cut, how could I have been so confused about this. I was really glad that I got a chance to see it standing because I would have doubted myself forever if I hadn't seen the legs, too. 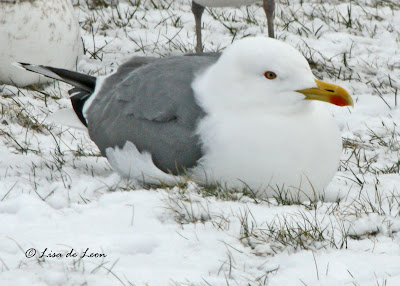 I had about five minutes with this gull before something flushed the flock and they all flew away. With so many birds in the air, I lost track of this one. 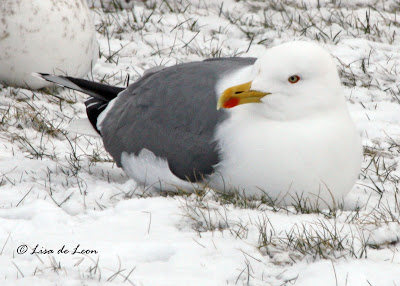 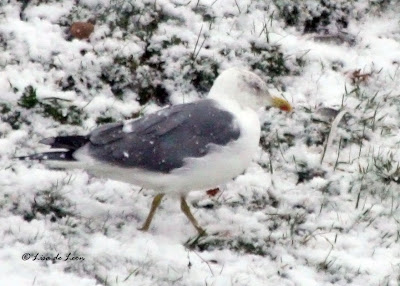 It was the transitional period that really left me baffled. This Yellow-legged Gull was photographed in late November. It still has some streaking around the eyes and front head. Yet, it seems in this picture that the back of the head is already turning white. It is during this time that distinguishing the Yellow-legged Gull from the Lesser Black-backed Gull is so difficult. I have added a picture of a Lesser Black-backed Gull below for comparison. 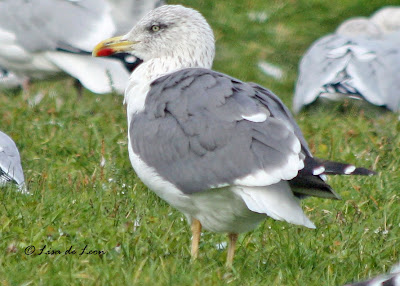 The Lesser-Black Backed Gull has a lot of streaking on its full head and down its neck. The color of the back which is darker than a Herring Gull but lighter than a Black-backed Gull is usually the first point of IDing the YLG and the LBBG. The yellow eyes with red orbital rings and yellow legs are standard on both of these gulls and serve to narrow the identification of the gull to two possibilities (here in Newfoundland.) Then to differentiate between the two gulls, the head shape and the streaking seem to be the best and last step in the ID. I'm sure that I will still be challenged by these two birds for some time but I certainly know more now than in November of this year. Small increments will eventually add up to some level of confidence in the future.
Posted by Lisa de Leon at 4:40 PM