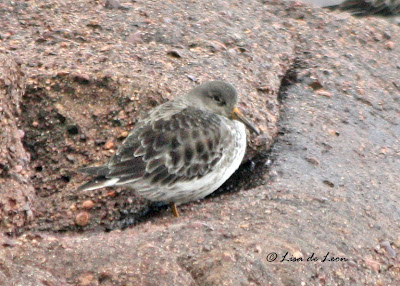 Cape Spear, Newfoundland is one of the great wonders of this province. It is the most northeasterly point of North America and wears many faces. On a calm, bright day it is a magnificent place that, by its sheer ruggedness, leaves visitors rapt with its beauty. This special spot is not just for tourists, many residents drive out to this point to sit in the car, walk the stairway to the lighthouses, roam the numerous trails, or peer across the Atlantic from the lookout. Whatever the pleasure, Cape Spear transports people from the everyday into a world of tranquility. 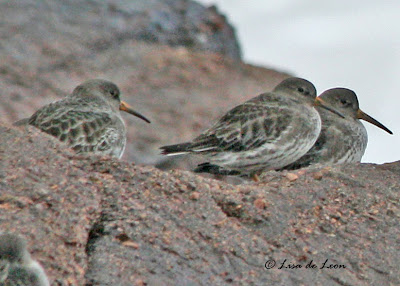 However, never assume that Cape Spear is always tranquil. There are days when the huge ocean swells generate crashing waves that chip away at the rocky crags sending spume into the car lot and into the faces of the visitors. It is a display of the awesome power of nature. It is a place where for a short while all worries are lifted from the shoulders and the "moment" is all that is. 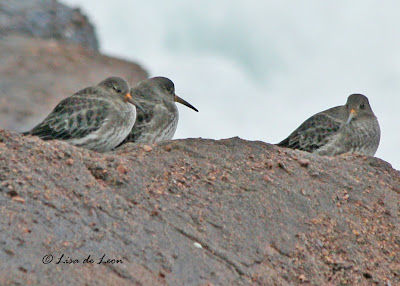 Cape Spear is a familiar spot to birders in Newfoundland as many species of sea birds fly off the point, particularly during migration. The land welcomes birds as well including Snow Buntings, Wheatear, Bobolink, Lapland Longspurs, Sparrows and even this year, a Killdeer. Common Eider are a frequent sight from the lookout and sometimes they have a stray King Eider among them.  For the second time, I have seen Purple Sandpipers resting on the rocks near the water's edge. 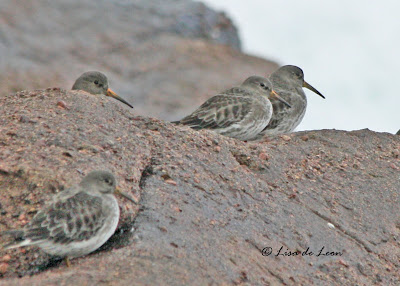 This small flock of five Purple Sandpipers were more accessible than the larger group I saw last year. They were resting with one of the five appearing to be the team guard. Four slept and one watched. Purple Sandpiper breed in the North and are frequent Winter visitors to Newfoundland. They stay close to the sea and feed on the food thrown on the rocks from the crashing waves. 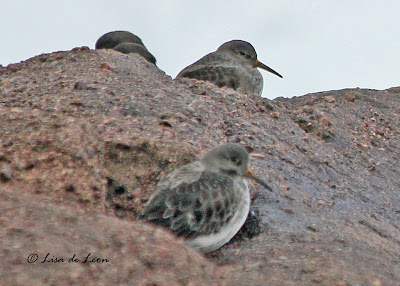 These birds seemed to be very calm and made no effort to get away as I slowly inched my way across the rocks to get a better look. Unfortunately, there was a stream of water between me and them so I wasn't able to get as close as I would have liked. I had already taken a little fall on some of the slippery grass around the Cape and I wasn't about to try to jump the rocks. 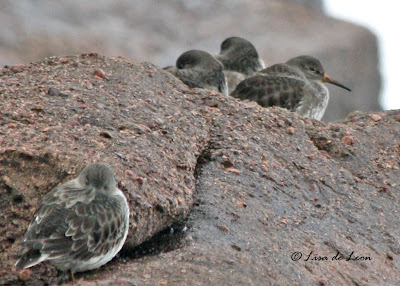 ﻿When I last saw Purple Sandpipers, they were too far away to photograph. This is a great improvement. Maybe next time there will be some brighter light and less distance. For now, I am pleased to have these pictures to share.
Posted by Lisa de Leon at 8:05 AM