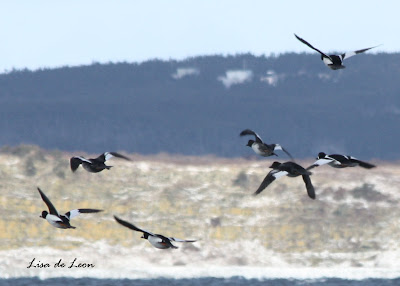 It is always a special event when I see a bird for the first time. This week I have seen three. These Common Goldeneye are among them. Strangely enough, having never seen this bird in over a year, I came across it twice in five days. The first time was in Clarkes Beach where a few were scattered around followed by a flock that flew in. 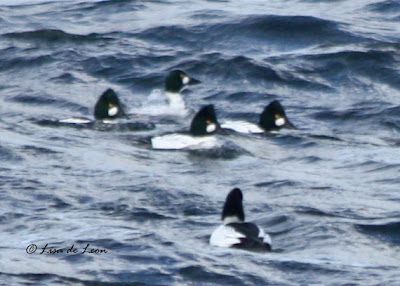 It was a harsh, blustery day making it more desirable to view the birds from the car rather than on the beach. Nevertheless, my birding partner and I braved the elements to walk down the shore in the hopes of getting a closer look. The small Common Goldeneye bobbed up and down with the waves and then would disappear altogether as they dove under the water. 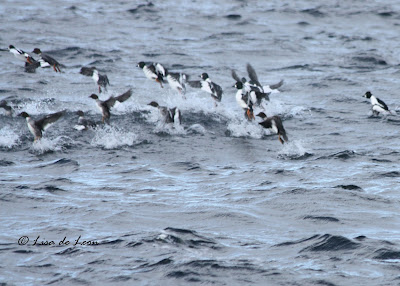 On Tuesday of this week I came across a much larger group of Common Goldeneye at Chamberlains. There were four sizable flocks where the highest number that I counted in a picture was 27. That represents only the numbers sitting on the water while there were obviously some under the water as well. This group seemed peaceful enough when something spooked them and they all took to the air and flew some distance away. 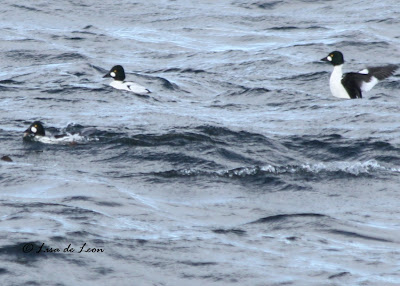 Luckily, I was able to stay in my car most of the time so I drove up the beach to look at another group. These shots are major crops of very distant pictures. I chose to share this one to show the snow white breast of the Common Goldeneye. When looking out over the water the light reflects off the white and makes the bird look really big. 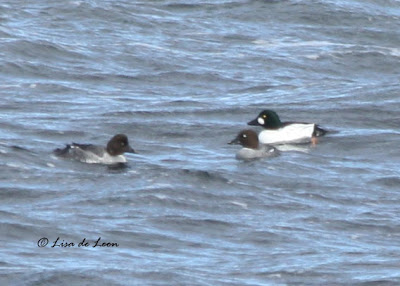 This last shot shows what I think are female Common Goldeneye. The tip of the bill of the female is typically yellow. The bird on the left of this picture seems to show the yellow but the one on the right does not. Keeping in mind that these shots are magnified many times which creates a blur coupled with the glare of the light off the water, it is possibly yellow but not visible. The white stripe along the wing seems to be a marker that separates the female from the immature male.
Posted by Lisa de Leon at 8:56 AM