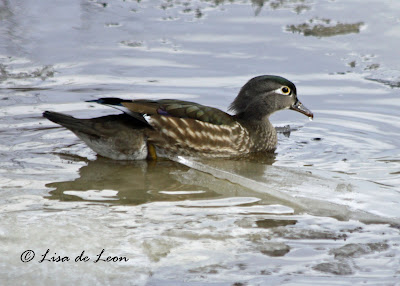 It was in September 2010 that I first saw a Wood Duck. As luck would have it, it was a beautiful male. I don't often hear reports of Wood Ducks being around so I really didn't expect to see another one so soon.  However, one was spotted in Kelligrews. Yesterday dawned as a fine weather day and I made a quick decision to go for a drive. I'm glad I did.

The Wood Duck typically breeds across the northern U.S. and southern boarder of Canada and as far northeast as Nova Scotia.  The Wood Duck is supposed to spend winters in Southwest Texas and points south. This kind of information always raises the question about what it is doing here. I will never know why or how but I can certainly enjoy its visit. 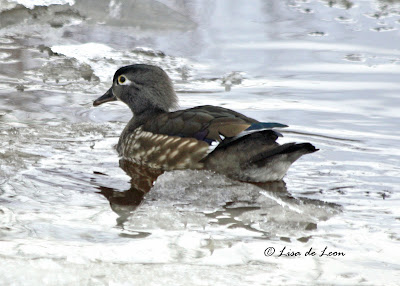 The female colors are much more dull than the male but its features are distinct and interesting. The white patch that surrounds the eye and its small size makes this bird stand out among the American Black Ducks,  the Mallards and the large hybrid ducks that have taken up residency at Kelligrews Pond. 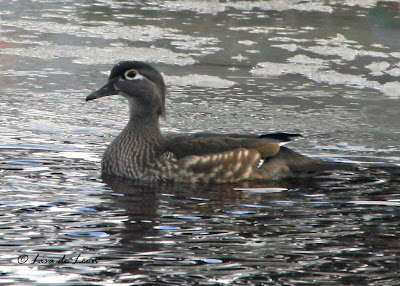 The female has a crest but it is much smaller than the male and its plumage is a mix of browns and greys and has a pattern of scales on its back. These ducks actually nest in trees. Sometimes I wonder if the duller colors of the females are intended to offer them extra camouflage when sitting on their nests. 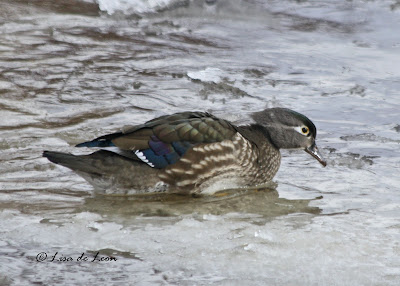 There is a slight hint of iridescent blue/green present on the wings of the female, but not nearly the abundant amount of color that adorns the male Wood Duck. 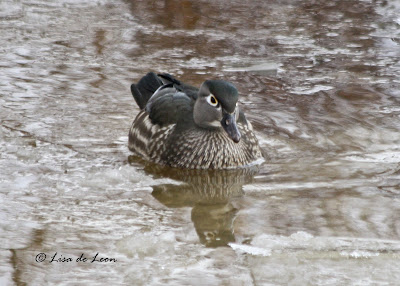 This particular female Wood Duck seemed comfortable with people. It swam towards me several times as if seeking a hand-out. At one point for no apparent reason, all of the birds in the pond flushed. They did a quick circle around and most returned to the shoreline. 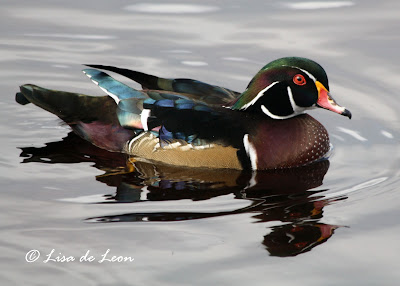 To round out the pair, I have included this image of the male Wood Duck that I photographed in Middle Cove in the Fall. The size and shape of both ducks are quite similar but the colors of the male are remarkable.
Posted by Lisa de Leon at 3:14 PM