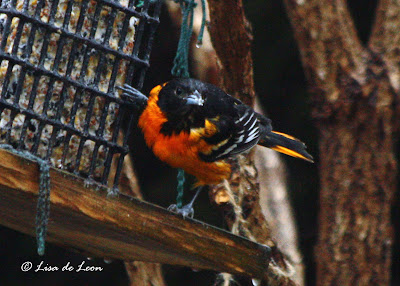 It was about 4 a.m. on Tuesday morning that I came to the conclusion that I probably need to go to Bird watcher's Rehab. Unable to sleep prior to another trek to the Southern Shore, I realized that I had been on a birdwatching binge for three of the last ten days. And.... in between, I had indulged in multiple birdwatching Happy Hours. None of these days were particularly great weather, although not cold, so it wasn't the lure of the outdoors that spurred me on. 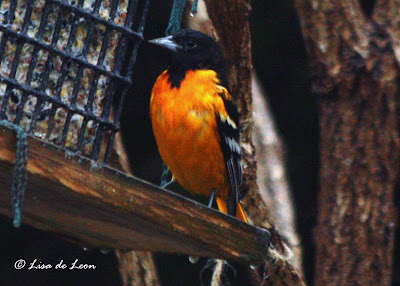 It is clear that I am inexplicably drawn to to watch and photograph birds. Now, there is the additional compelling desire to "list." Life list, yearly list, daily list, provincial list, trip list, and backyard list. Participation in the Christmas Bird Counts added yet another dimension - counting all of the birds! I think I need an intervention. I do take some comfort in knowing that I am not alone in this compulsion! 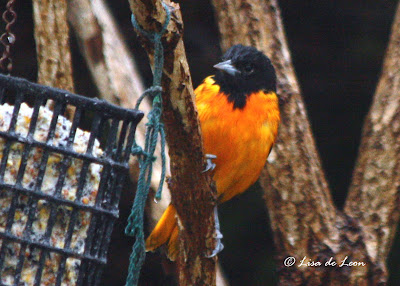 It seems impossible to not go see great birds like this male Baltimore Oriole or the Dickcissel that are frequenting a great feeder in Fermeuse. The blazing orange color of this spectacular bird flashed through the trees teasing the bird watchers until it finally made a full-on show of itself. How many opportunities are there to see this rare/occasional visitor to the province. When the opportunity arises, I will be there! 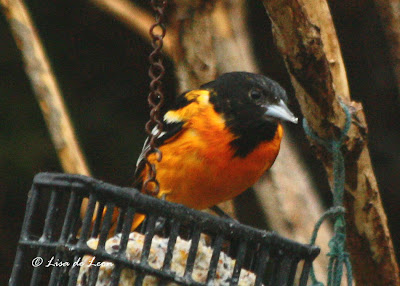 This great bird named after Lord Baltimore has had a baseball team named after it. Not many birds can make that claim to fame. The Baltimore Oriole breeds as nearby as Nova Scotia and  winters in the southern Atlantic, particularly Florida. It is indeed a special treat to find one here in the winter. 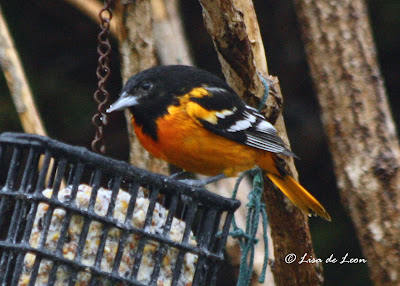 I longed for the thick fog, drizzle and general haze to lift for just a few moments so that I could capture the true vibrancy of this bird's plumage. However, that didn't happen. Another birder and I ducked in under a patio deck to stay dry while we watched and photographed this bird.  Oh, no - I can feel the urge to go view this bird in the sunshine.  Maybe I just need a support group 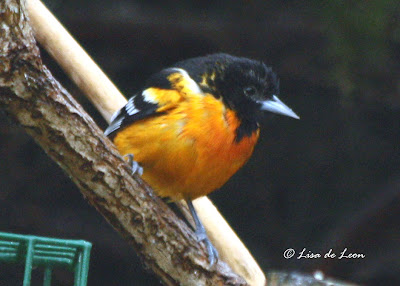 It was likely the environs that attracted this bird to the many feeders in this wonderfully landscaped yard. The area was surrounded by tall trees and thick woods. There are no passing cars nor loud noises nearby to drive off the birds. It is a small bird paradise tucked away on the edge of the woods in Fermeuse. Birds at this feeder were abundant and included the Dickcissel, Black-capped Chickadees, Dark-eyed Juncos, White-winged Crossbill, a Hairy Woodpecker and even two Boreal Chickadees that don't usually dine at feeders. 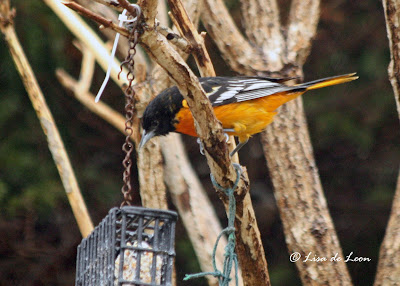 It would have been so easy to bring a lawn chair and just sit in this one spot for the whole day, but that couldn't happen because there were still other birds to see on Tuesday's outing, including the visiting Northern Lapwing that has been staged on a field in Renews near the government wharf. After spending two days from dawn to dusk in Renews, I have gained a real appreciation for the birds and the many residents who host feeders and welcome birders to enjoy many birds that choose to stop and stay a while. 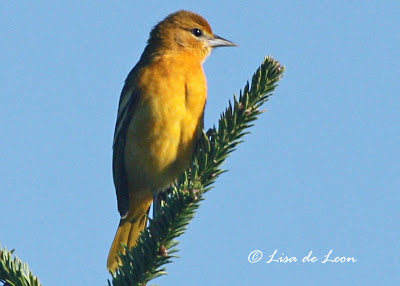 Prior to seeing this male Baltimore Oriole, I first got a good look at this female Oriole while on a Fall walk through the Botanical Gardens (St. John's) in September. This bird was featured in another posting shortly after that viewing.

It would be grand to see a pair of these great birds together. Birdwatching in Newfoundland has gotten off to a great start in 2011. I wonder what lies ahead.
Posted by Lisa de Leon at 7:13 AM