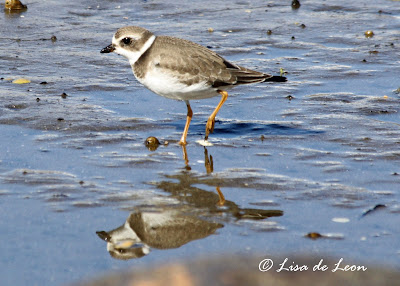 The Semipalmated Plover is a common sight around the freshwater and sandy beaches leading up to migration. These little birds blend in with their surroundings so well that at first glance, it is difficult to see them. When scanning a beach, it is necessary to watch for movement. Where there is movement, there is likely a shorebird. Note: This photo was taken at Tilting, Fogo Island. 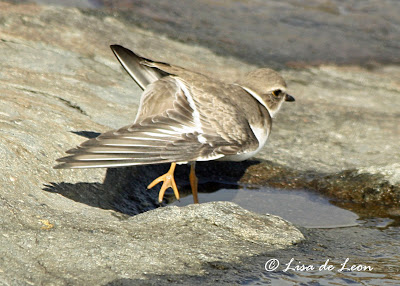 When I first heard the name of this bird, I had no idea what semipalmated meant. After a quick "look up," I began to watch for the webbing. Semipalmated means that there is webbing between some but not all toes of the bird. This small plover was good enough to raise his foot and give me a good view.  Also, notice the little black tip on the end of its toes. I think he has had a manicure. 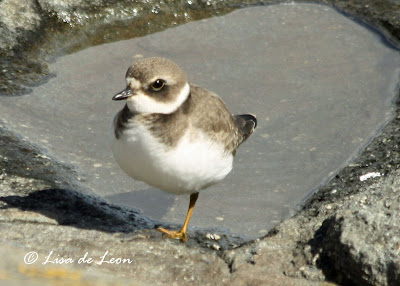 This one-legged stance is a frequent pose of many shorebirds. When not standing, the Semipalmated Plover is often seen scurrying around looking for food or resting with its beak tucked in under its wing feathers. 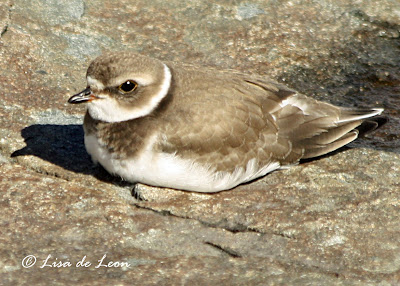 ﻿On the day that these shots were taken in Flatrock it was quite cool. The rocks on the other hand retained the heat. This probably explains why this little plover is having a rest. I was able to move quite close to all of the birds in this flock without disturbing them. They went on about their routine. 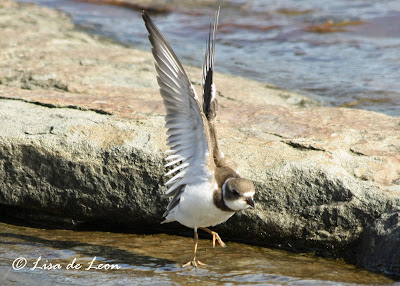 From the tip of its beak to the tip of its tail, the Semipalmated Plover is about 7 inches long. Yet, it looks so tiny next to the big rocks and globs of seaweed. The wingspan of this plover is twice the size of its body ranging from 14 to 16 inches wide.  In flight this plover looks quite large.
Posted by Lisa de Leon at 10:46 AM