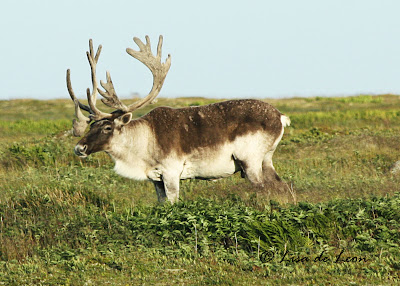 Birding trips are always filled with excitement and anticipation. There is the satisfaction derived from finding all birds and sometimes, the disappointment of not finding the target bird. One thing for sure is my mind is set on scouring the landscape, skyline, tree tops and road sides for anything that moves.
Then, totally out of the blue, appear other creatures, great and small. Today, I would like to share with you some of the special sights that I came across this summer. 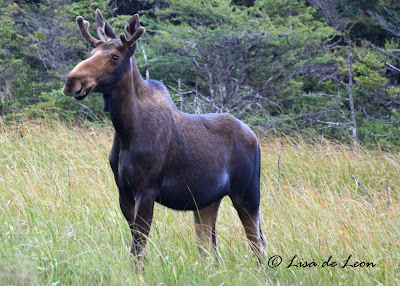 While birding the Southern Shore, I got my first up-close view of a caribou. They look really front-heavy with all of those antlers. This guy also seemed to be very sleepy. As I stopped on the side of the road to gawk and shoot pictures of this caribou, a driver came by and shook his head at the sight of me doing the tourist thing. That didn't stop me, after all, that was the first car that had passed by in 10 minutes.
On the same day at dusk, I came upon this stately moose who didn't mind my camera at all. He even seemed to pose. 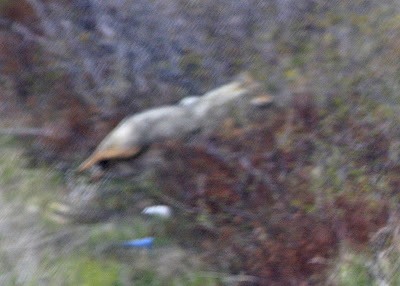 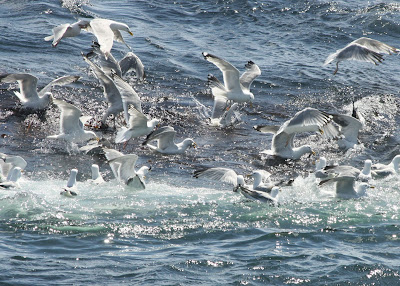 Later in July, I took a drive to Grates Cove to have a look at the rock walls and birds, too. When driving out of the community, I spotted a raptor overhead. True to form, I stopped the car, grabbed my camera and jumped out to start shooting. Out of the corner of my eye, I saw something move at ground level. I turned and spotted this blurry coyote darting across the road. It was reflex to turn the camera on it in the hopes of getting a picture. That was my first sighting of a wolf in Newfoundland.
There was so much to see everywhere I went this summer. On a short trip to Ferryland, I saw the gulls frantically attacking the water, and I stopped to have a look. (That is the difference between being retired and not. When I see something interesting, I stop. I never seemed to have time to do that before.) The frenzy before me was caplin-driven. The gulls were following a school of caplin and happily taking their mid-day meal. 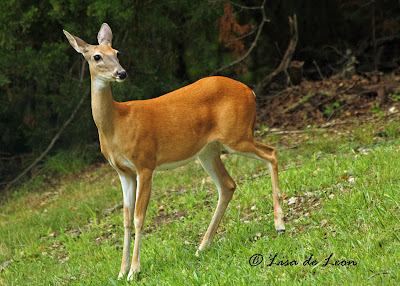 Deer are plentiful in Arkansas but there is something in me that makes every sighting a surprise. This was the case as my sister drove down a country road toward a lake. Up pops this deer that takes its time to graze and watch us. No fear. Out comes the camera, again. I was terribly distracted though because as I was shooting the deer, a bluebird flew within range of my camera. It was "nature overload." Nevertheless, I was able to get a couple of shots of both the deer and the Eastern Bluebird.
I am totally addicted to the outdoors and my camera. Each outing is rewarded in some special and unexpected way.
Posted by Lisa de Leon at 1:41 PM