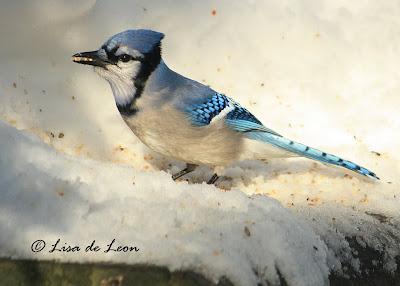 I have never really gone in search of a Blue Jay to photograph, but they are so prevalent that I don't miss a chance to snap them when I can. I have amassed a collection of Blue Jay images that cover the seasons, are local and not local, and include two juvenile Blue Jays. 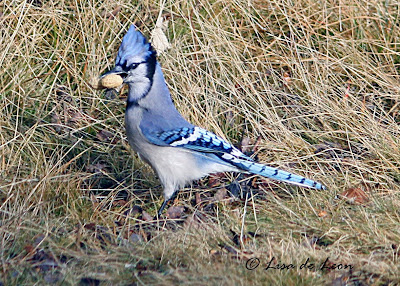 Attracting Blue Jays is simple. Provide peanuts and/or bird seed mix that contains some nut pieces. They just appear to make sure to clean the dish. It was recently posted on the Discussion Group that a lady had topped up her feeder with a full bag of seed and in less than one day, a group of Blue Jays left it bare. 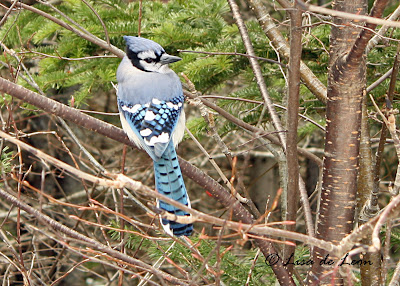 A Blue Jay is an extremely common, brightly colored, mid-size bird. It is particularly handsome when it has its purplish crest raised. There are many colors of blue and grey splashed over this bird. In the sunlight, it is particularly stunning. It is no wonder that Prince Edward Island adopted the Blue Jay as its official bird in 1976. 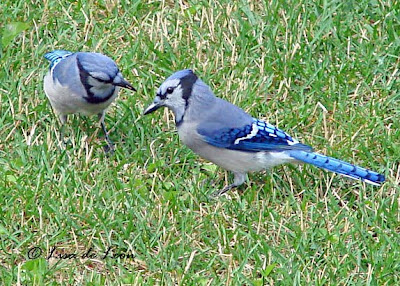 Blue Jays are social and tend to appear in groups. I found these two in my back yard having a conversation, perhaps about where they plan to dine next. The Blue Jay is akin to crows which is evident when they release a loud, piercing shriek. 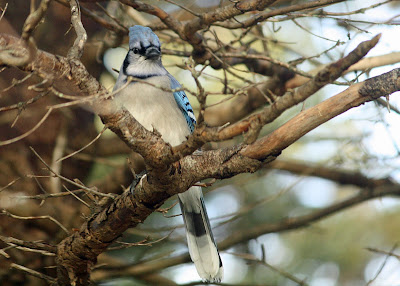 I found this posing bird at Long Pond. There were two ladies who came prepared with a basket of peanuts and their cameras. Two Jays were quite accommodating. I didn't want to move in too closely on their photo shoot, but I couldn't help but snap a few shots over their shoulders. 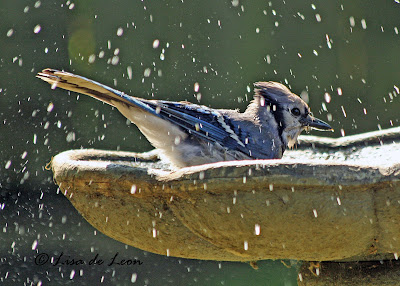 This bathing Jay was snapped in Arkansas. It is interesting to note that the overall color of this bird is slightly different from the ones here in Newfoundland. Birds adapt to their surroundings while keeping their overall distinguishing marks. 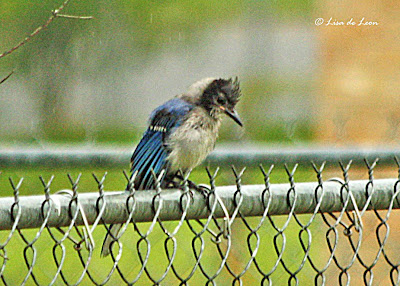 The juvenile Blue Jay is not so handsome. It appears to be scruffy and awkward. The head is mostly black at this stage. It will evolve to have a black collar, bright blue/purple crest with a white face and chin. 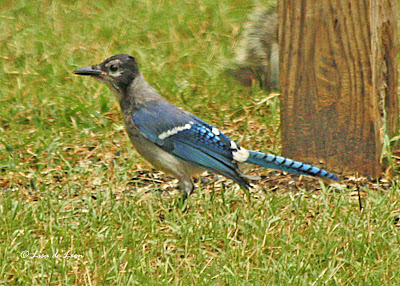 It is interesting that it is the head and face that are the last to mature. The wing and tail feathers already have the clear Blue Jay markings. These shots were taking of the juvenile jay in Arkansas in July. 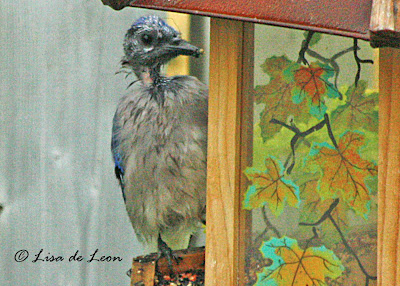 According to Ken Knowles via the weekly "Winging It" article in The Telegram, this Blue Jay is going through a typical molt that occurs at this time of the year. This is my first recollection of ever having seen this before. I have seen the bird in this condition for several days, although not within the last two days. Maybe the transition is complete by now. He sure looks sad.
Posted by Lisa de Leon at 1:09 PM