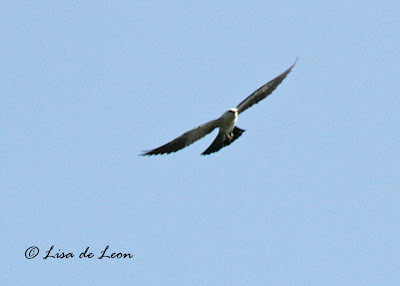 Raptors soar. It is a very distinctive type of flight that catches my eye very quickly. I had spotted a Mississippi Kite on several occasions while in the car in Arkansas but at no time was it suitable to make a quick stop. I was very pleased when I was sitting in the backyard and spotted this Kite soaring in the distance. 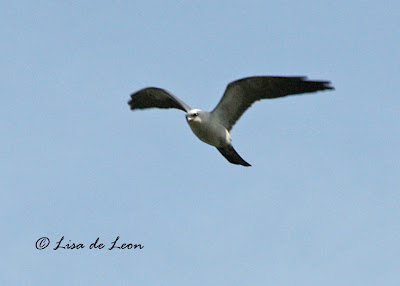 It is only due to some good morning sunshine that I was able to get any identifiable pictures. This crop of a shot that actually shows the eye is around 3% of the full image. I was very pleased with the outcome considering the distance both horizontally and vertically. 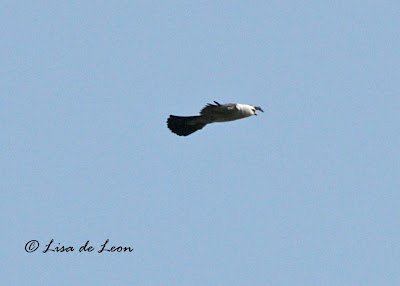 This image shows clearly a white head and neck that fades into gray and then black markings. The Mississippi Kite is very common in Arkansas and much of the mid to southeastern states in the U.S. Typically, they stay in dense forest. This one ventured into the trees on the edge of a suburb. 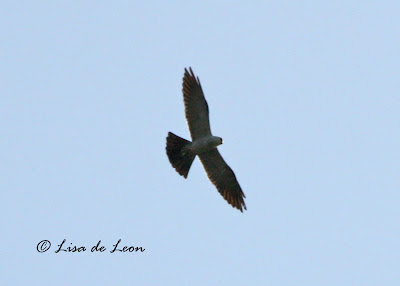 If you are new to identifying raptors like me, it is a good idea to carry a camera. Even a poor shot can help in the identification process. This image is almost identical to one of the pictures in a North American field guide that I have. The shape of the wings and tail as well as the under markings provide clues to the birds identity. Peterson's field guides often show the raptor from above, below and sideways. That is a great resource for the new birder. 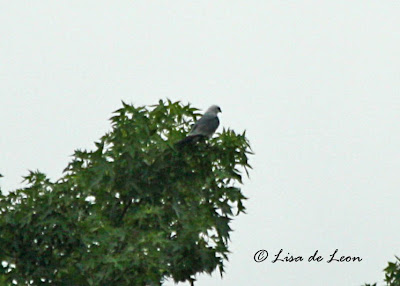 I watched this Kite until it settled in atop a tree very far away from me. If I hadn't seen it land, I would never have seen it, even with binoculars. It was about 6 blocks away from me. I don't know how the shot came out, but I'm glad that it did.
Posted by Lisa de Leon at 4:51 PM