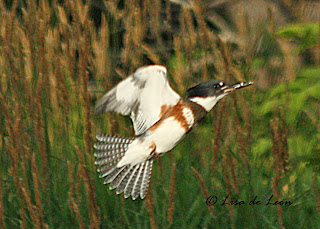 The Belted Kingfisher is one of my favorite small birds. They can often be found by the water where they feed on small fish in the morning or evening. They are extremely fast and extremely skittish when people approach. IBecause of these factors, it is very difficult to get a shot of them. 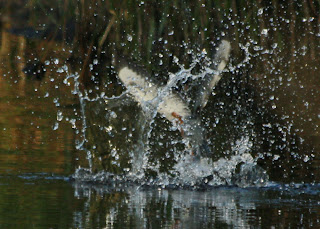 I included this shot, even though it is very hard to distinguish that this is a Kingfisher, to illustrate the force behind their water dives. Most often, they get their prey on each powerful dive into the waters. 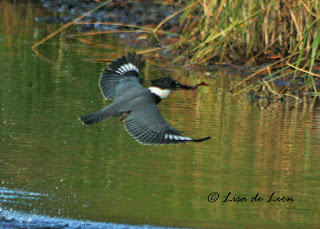 About two weeks ago, I came across six Belted Kingfishers feeding at Quidi Vidi Lake. I thought that I had hit the jackpot. It was about 45 minutes before dark and the sun kept peeping out from behind the clouds. I worked my way down to the shoreline on the South side of the lake and began inching my way toward them. 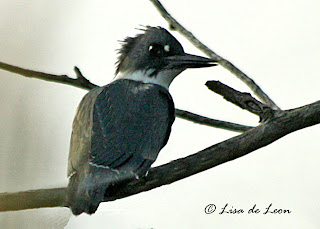 It was a real challenge, I even got my feet wet in an attempt to get close. They had their eye on me and I was lucky to get with 30 feet of them. Undaunted, I kept waiting for the moment to move in closer. It was nearing darkness and I had almost given up when another landed in a tree. 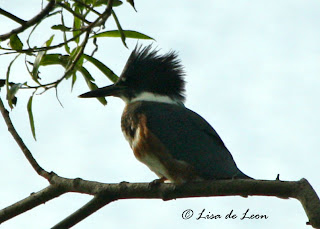 It is well known among birdwatchers, that the photo galleries amassed have few Belted Kingfishers. I wanted so badly to be one of the few with some great shots. While lighting and distance did handicap my images, I was able to get this great profile showing the fulling expanded crest. Although, it doesn't show the great blue color. The call of the Kingfisher is very distinct and very loud. It sounds somewhat that a loud chattering. 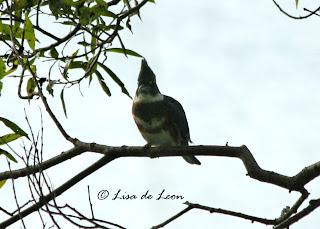 This my first chance to see the full face of the Kingfisher with it elevated crest. It has real personality. Oh, if only the sun had been over my shoulder instead of his.  It is exactly this kind of challenge in bird photography that will keep me going and going until I get the shots I want. For me, it will never get old.
Posted by Lisa de Leon at 9:17 AM