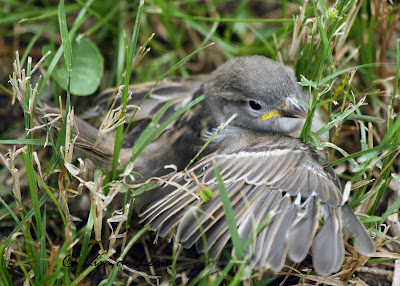 Early one morning in July, I was sitting on the veranda at my sister's home in Little Rock. It is a busy time of the morning for the many birds that swept in an out of my sight line. It was particularly cool, only about 80 degrees, in the morning that made it  perfect for birdwatching. I should also mention the absence of wind. There was absolutely no wind and this was the case most of the time. The outdoors was so quiet without the blast of wind in the ears. 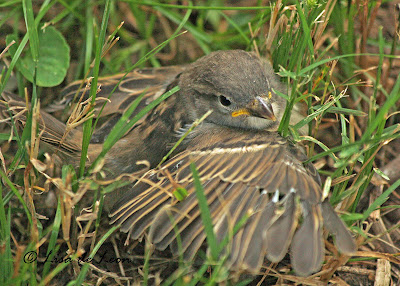 Right before my eyes, this little House Sparrow fell out of a nest in one of the towering branches above. I watched as the parents came to check on the baby. For them, it seemed somewhat matter-of-fact, as they didn't seemed stressed at all. I was more stressed than they were. I ran and grabbed my camera to start shooting. Although the poses in both of shots are the same, you will note the difference in lighting. In the darker, second shot, I increased the shutter speed. I quickly decided that I liked the first setting and returned to it. 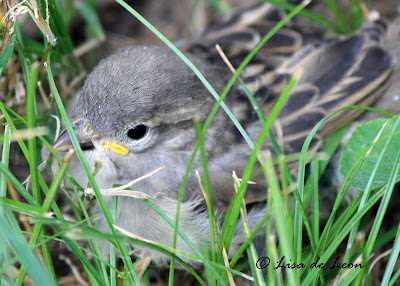 I tried to stay away from the small bird in the hopes that the parents would figure out some way to recover it. Soon, I had to give up my constant staring and go out for a while. I couldn't wait to check on the status of this little guy when I returned. I found that he had moved and managed to tuck his wings in a bit. It made him look stronger and more in control. I felt a little better. 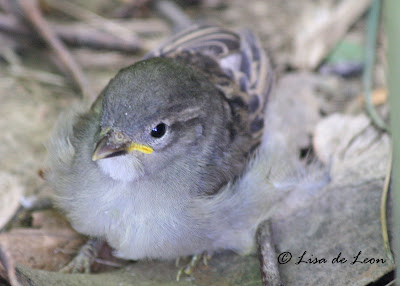 As the day went on, he seemed to find his feet and begin to get around a little. It was in this pose that I last saw the baby. When I returned to the yard several hours later, he was gone. There were no signs of foul play so I assume that it found a way to flutter off somewhere else. I used a lot of self-control to not "rescue" this bird. All experts suggest to leave baby birds alone and let nature take its course, what ever that may be.
Posted by Lisa de Leon at 11:31 AM