Sea bird breeding along the coast of Newfoundland 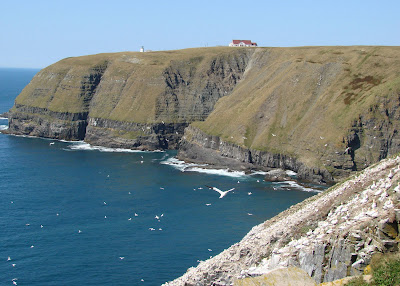 It is remarkable how I could have lived on this island for over 25 years before I ever saw a whale frolicking offshore or the many bird sanctuaries that cradle main seabird breeding grounds for thousands, thousands of birds.

This scene is Cape St. Mary's where during the summer and early fall, you can walk right out to the breeding grounds of the Northern Gannet. They are a very sleek and beautifully colored seabird. A Northern Gannet was one of the first birds profiled during the oil disaster in the Gulf this year. 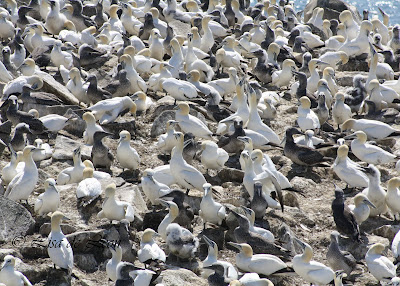 This shot shows how little space a single Gannet needs. Look closely and you will see the many young birds in the group.

The problem with photographing these birds is that there are so many of them that it is very difficult to isolate just one. Nevertheless, I did and will post a profile dedicated to the Northern Gannets. 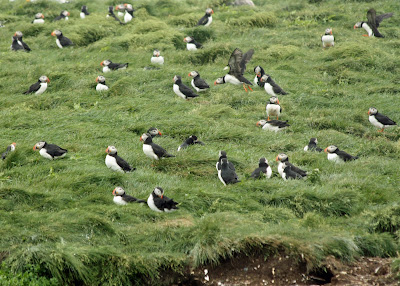 Just off the tip of Elliston on the Bonavista Peninsula, it is possible to walk straight out to the Puffin breeding grounds. On this day, it was overcast and the wind was gusting to over 100 km per hour. Our group had to lock arms to ensure our safety. It was only by lying down that I could steady my camera enough to get some pictures. Watch for the upcoming Puffin posting. 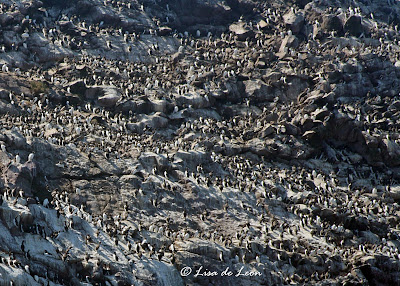 Off Witless Bay on the Southern Shore of Newfoundland there are three islands where many auk breed their young. This shot was taken on the main Great Island where there were tens of thousands of Common Murre, Thick-billed Murre and Razorbill. More on these birds in their individual posting, coming soon. 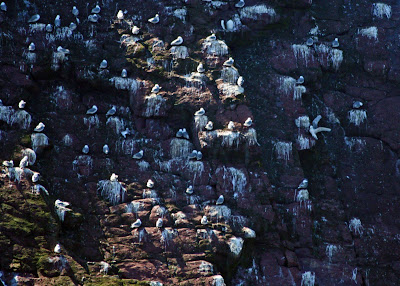 On the other side of the Great Island, the Black-legged Kittiwakes cling to the rocks to breed and raise their young. It is a thrilling experience to see all of this healthy nature just swirling about and above you. It makes you forget the city, traffic, and the maddening day-to-day work existence. It just is Nature at its best.

On my visits to these places I have also seen many Great Cormorants, one Northern Fulmar, one Sooty Shearwater, and many Black Guillemots.

Before posting individual bird images, I wanted to show the sheer magnitude of the flocks of birds that make their way the Newfoundland as a safe haven to have their young.
Posted by Lisa de Leon at 6:56 AM