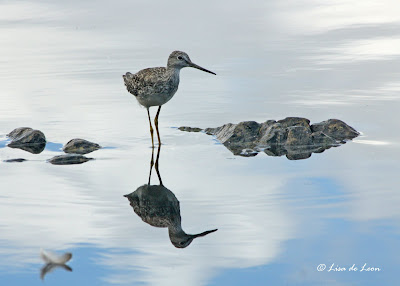 Every now and then all elements come together for an unplanned "artsy" picture. This was the case at Jones Pond in Torbay where I found this Greater Yellowlegs. This was the only Yellowlegs that I saw on the pond and it was particularly skittish. It didn't stay around too long. 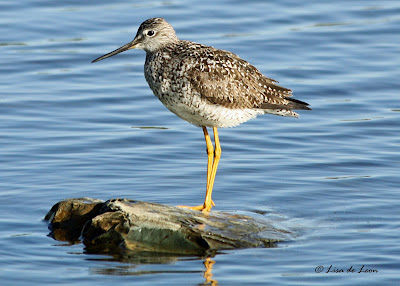 The Greater Yellowlegs has been the most common shorebird seen around St. John's this summer. They moved in during July and are still present in the ponds. It is very common to find this bird perched on a rock protruding out of the water. (Shot taken at Kenny's Pond) 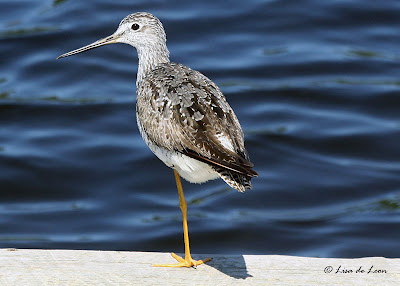 I have selected a series of pictures to illustrate the common behavior of the Greater Yellowlegs, as well as the color variation. For specific details about this or any bird, please consult a field guide (or two.) Note that the bird in the third picture appears more gray and less brown than the bird in the second picture. These images were taken at different locations in different months. (Shot taken at Kent's Pond.) 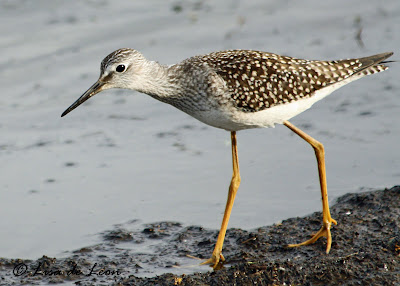 This Greater Yellowlegs is searching the shoreline for food. They can feed on their common diet of small fish, mollusks, crustaceans and invertebrates either on the shore or in the water. This bird is working the shores of Quidi Vidi Lake. 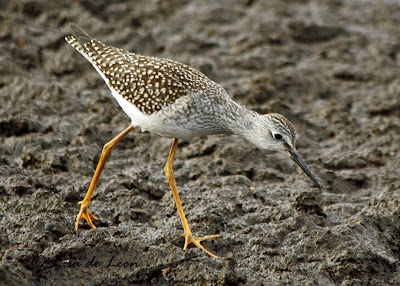 This may be an immature Greater Yellowlegs, judging by the brown on its upper parts. Its bill also seems somewhat shorter than the full adult. Making these determinations on my part is only a guess based on the clues provided in resources. A more experienced birder would know right away weather this is a Lesser Yellowlegs or an immature. I still have much to learn about all groups of birds. After all, I only have ten months of experience under my belt. 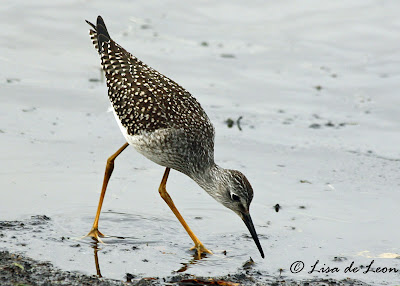 This is a common pose struck by the GYL as well as other shorebirds. They scour the edge of the water looking for any food that may have washed ashore. 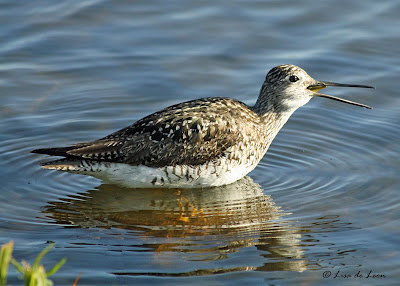 In this image, the GYL has used its long legs to move into deeper water and catch a small fish. I watched this bird for quite a while as it worked very hard to slide the small fish down its throat. It was a very slow process, but I had to shoot will a very fast speed to get a clear image because as he tried to swallow the fish, he shimmied, over and over. 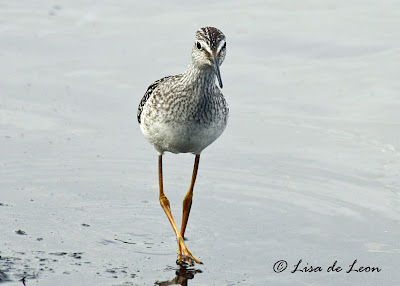 Most often, I get pictures of birds moving away from me, but this Greater Yellowlegs decided to move directly toward me. I imagine he has been around a community pond for quite some time this summer and has developed a tolerance for people. If interested, it is possible to see this bird in most any pond and along the sea shorelines. Because their coloring camouflages them so well, you may have to look very closely when scanning the seashore.
Posted by Lisa de Leon at 11:12 AM