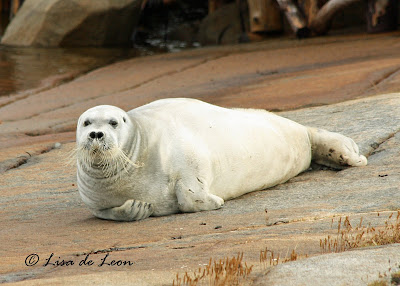 While pursuing birds, I have come across several wonderful animals. Many I have shared through this blog. This is my first time to get an up-close look at a Harp Seal. It was early in the morning when I was walking along the shore in Tilting with a cup of coffee in one hand and my camera in the other. I almost scalded myself with the coffee when I saw this big guy. 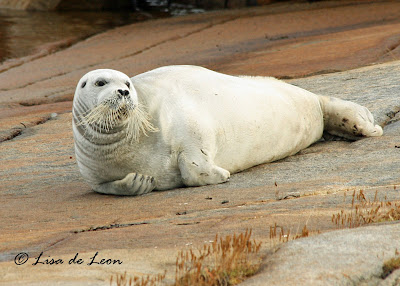 I had no idea how long it might stay or if I would spook it so, I set my coffee down on the side of the road and began shooting.

As it turned out, he was in no hurry to go anywhere. It stayed all day and lounged on the rock, often dosing off. He was not at all bothered by the on-lookers. I wondered why I was the only one agog over this great creature. I later learned that this particular seal has been basking on this rock off and on all summer. I was surprised that he wasn't named yet. 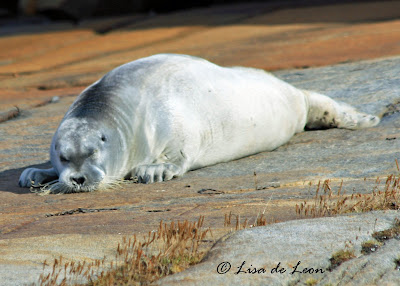 The Harp Seal thrives in the North Atlantic Ocean where there are approximately 7.5 million of them. With that many around, I wonder why this was my first meeting. I have seen seals in the water but this one gave me a real opportunity to look him over from head to toe. This was a special encounter.
Posted by Lisa de Leon at 1:17 PM