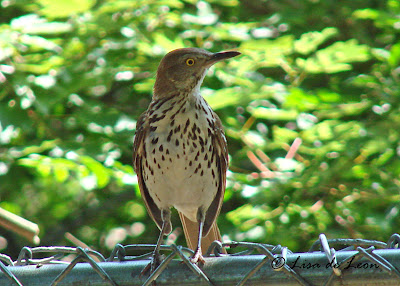 This Brown Thrasher was a brave bird to venture into my sister's yard in Little Rock. It was one of the few birds that was not spooked with a person in the yard. In fact, it seemed somewhat curious. I got quite accustomed to seeing this bird around on a daily basis. 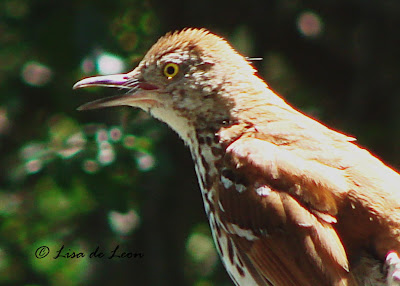 This is quite a large small bird. It measures about 12 inches from its head to the end of its large, long tail. When it sat on the fence with a Mourning Dove, it was every bit as long as the dove, but not a stocky. 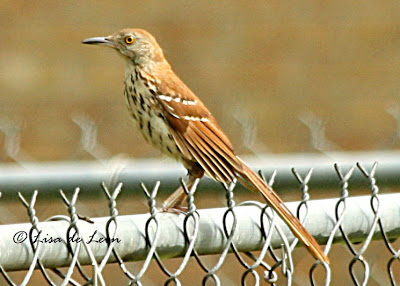 It has two white wing bars that stand out against it rusty, rufous coloring. On the breast it has dark brown streaks. Its golden eye is very prominent. This bird is a common sight in the mid to eastern U.S. It can also be found in some areas of western Canada. 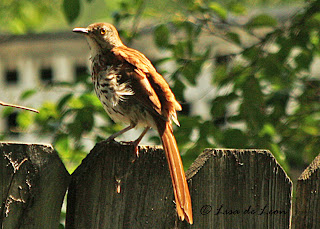 Note:  Something happened with the upload of this image and it is squeezed up. I tried to fix it but with no luck. I like this image because it shows the long tail very well. It was often observed foraging on the ground where it nimbly ran from place to place looking for insects. 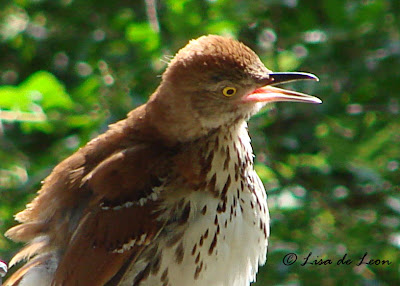 In this image, the Thrasher is puffed up while it sings its song. It can mimic the songs of other birds, like a Mockingbird, but it also has its own repertoire.
Posted by Lisa de Leon at 5:45 PM