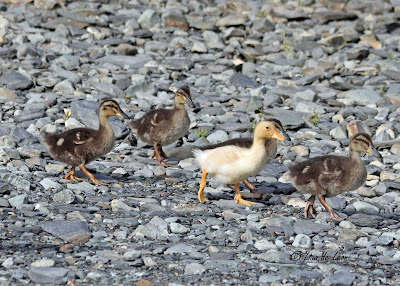 Brigus South is a beautiful fishing community. So small is it that when the radio is on in the fishing stage, it reverberates around the entire community. The sound of children chasing each other, laughing as they go, transported me back to a simpler time. Tucked in on the quiet beach was a group of five duckling, apparently asleep.  As I moved closer, they sprang to their feet. This is not an uncommon sight, as ducklings can be seen around most any small body of water throughout the summer. 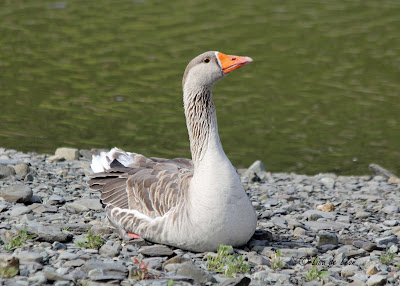 However, what was uncommon was this domestic Greylag Goose hovering over the young.  This goose has been in Brigus South for quite some time, like the Greylag that stayed at Quidi Vidi for years.  A man joined me for a walk around Kenny's Pond yesterday and told me a whole different version of how the Greylag came to be a Quidi Vidi. He said a dozen of these geese were imported to Newfoundland and dropped in Virginia Lake. Ten of the twelve didn't survive. One, he said, kept flying between the harbour and Quidi Vidi where he eventually took up long-term residency - a visiting goose-in-residence.  The other, he said, must be the one in Brigus South. Is this little bit of folklore true or is the other story I posted about Michael the truth of it? 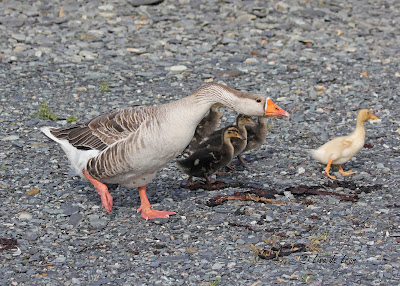 Anyway, back to the main story: When I approached the small ducklings on the beach, they headed right toward me. The people of Brigus South must be feeding the ducks regularly.  Bursting to the front of the duckling was this very protective goose. The behaviour of the Greylag made me think this is a female. She was not going to let me get near, and her aggressiveness was very effective in causing me to back off. 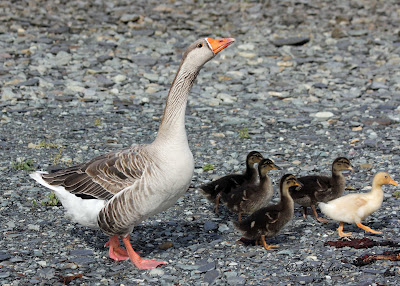 While there were ducks around, none came to the aid of the ducklings. This was a clear adoption. How did it come about? Were the ducklings just claimed by the goose? Did something happen to the natural mother?  Whatever the scenario, it was an interesting sight. 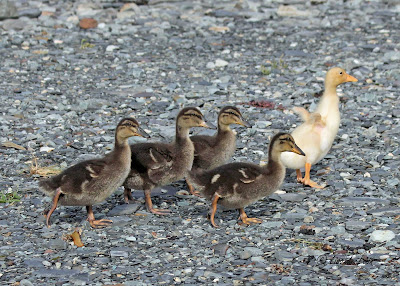 Having been herded away from me, the ducklings moved on about their business, the Greylag calmed down, and I looked on in dismay.

Aside from this scene, there wasn't much activity in the basin. I have been in this area when it was alive with sea birds. I guess it has everything to do with the caplin being in. It is certainly a place worth visiting from time to time.
Posted by Lisa de Leon at 7:46 AM