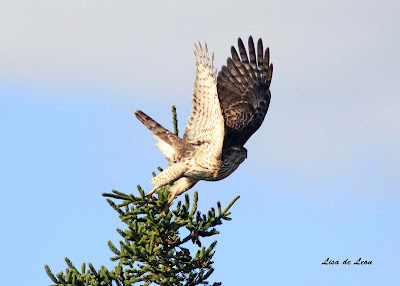 The warmth of the mid-day sun yesterday coaxed me up to Cape Spear Path, East Coast Trail for what may be my last hike in this area for the season. It was my hope to see some woodland birds. 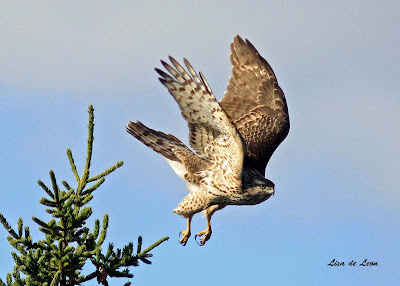 When I rounded a bend on the boardwalk, I espied this big bird sitting atop a tree. We locked eyes. I raised my camera; he lifted off. Wow! It flew in my direction. I had a quick recollection of  a story told by Butterpot Park Ranger Keith Brown wherein a Northern Goshawk attacked one of their workers. They used a hockey helmet to get the young woman to safety. A helmet? I didn't even have a hoodie! 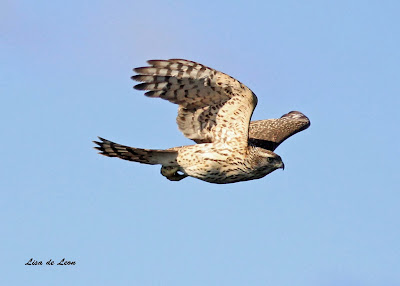 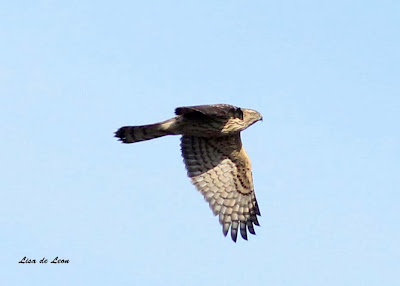 It must have had its eye on lunch when I arrived. Without doubt, I got the longest look ever at this great bird. 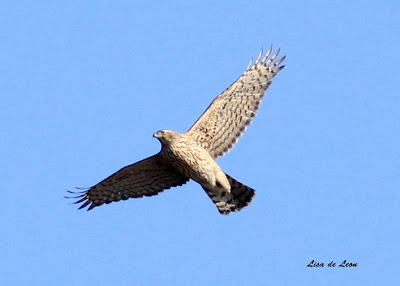 In the meantime, all of its circling over the area must have driven all of the small birds into hiding. In over an hour, I was only able to see two juncos.

Note: There was a flock of about 25 flighty Snow Buntings flitting around all over Cape Spear. Terry J. reported seeing one Savannah Sparrow in the area. Aside from a few Black Guillemots, some still in breeding plumage, and a few Northern Gannets, there was nothing of note in the waters off the cape. There were about 30 + juncos in the bus turnaround at Blackhead. I stayed quite a while and the only other birds seen in the area were American Goldfinch and Golden- crowned Kinglets.
Posted by Lisa de Leon at 6:39 AM