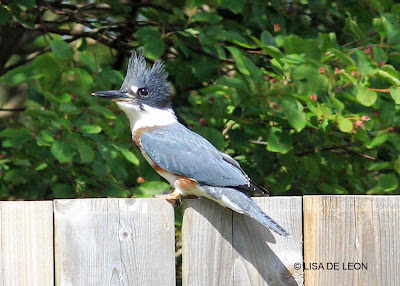 Where ever there is water, there is typically a Belted Kingfisher. Lakes, ponds, rivers and brackish waters, all provide feeding grounds for this fish-eating bird. Rarely do I get a glimpse of one sitting for long enough for a picture, but this was an exception.
The Belted Kingfisher is a particularly skittish bird that will take to the air as soon as I approach an area. Often, I don't even see it before it lifts off. However, there is no missing its unique chatter as it flies by. This bird will hover over waters, lower than an Osprey, and then dive to capture its meal. With a fish in the beak, it will fly to a tree where it enjoys its catch. They really put on quite an entertaining show and warrant sitting down for a while to watch them in action.
Posted by Lisa de Leon at 6:24 AM