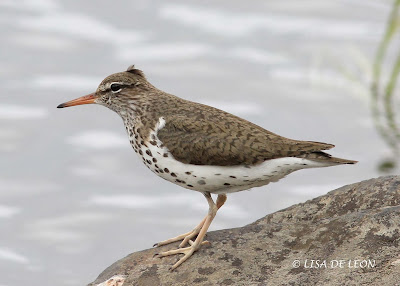 Unlike the warblers and sparrows that come and stay for a few months, shorebirds seem to appear and disappear. Among the earliest to arrive are the Spotted Sandpiper followed by the Greater Yellowlegs. 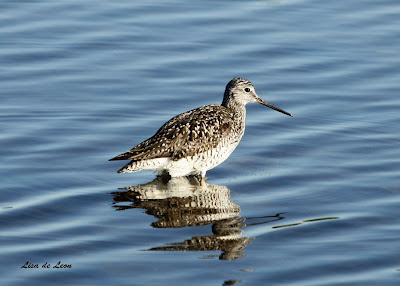 They are such a common part of the scene that by August they become incidental in the shorebird hunt. 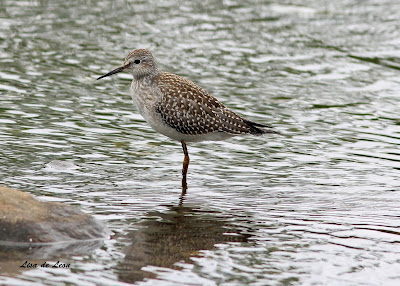 The Lesser Yellowlegs is much less common and requires a little more focus to identify them. It is always much easier when a Greater and a Lesser are standing side-by-side. However, this year I felt much more confident in differentiating the two species. 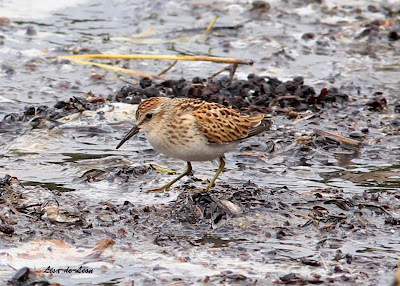 Also among the fairly early arrivals are the Least Sandpipers. One of the best places to see these little birds is in Cape Broyle. Yet, I have seen them in Goulds, Renews, St. Shott's and this year, I saw seven in Gambo. These little birds are among my favorite. 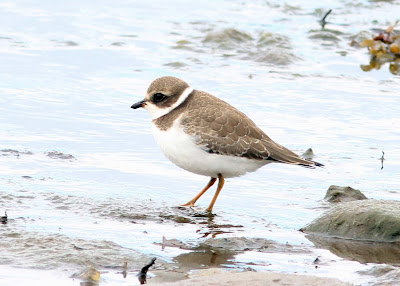 Plentiful and likely to be seen anywhere is the Semipalmated Plover. This little bird can be seen on shorelines, in farm fields, and just show up in the most unlikely places. When spotted, wherever that may be, it is a good idea to look more closely as there just may be some other shorebirds traveling with them. 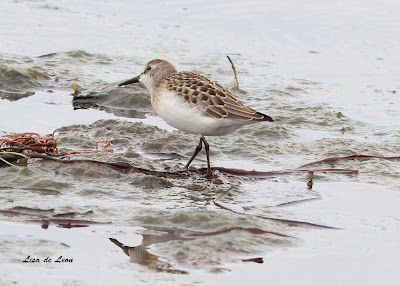 The Semipalmated Sandpiper is also quite common here. Large flocks of them can be seen in Renews, Arnold's Cove, St. Shott's, Bellevue, Spaniard's Bay or anywhere there is salt water and mud flats. 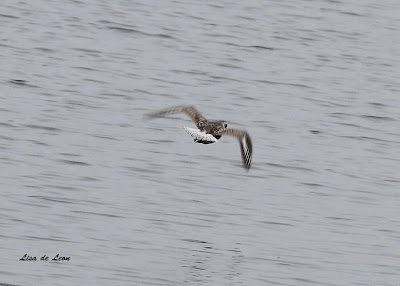 While I didn't see that many Black-bellied Plovers this year, I did get a chance to watch about a dozen in Renews this year. As a result, I now feel more confident differentiating the American Golden Plover from the Black-bellied. 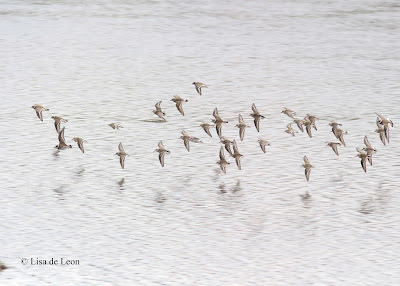 Shorebirds often lift off and fly in some sort of formation all around an area and return to the original spot to settle in again. Flight shots reveal great looks at the differences in plumage. This shot shows three species moving around Arnold's Cove. 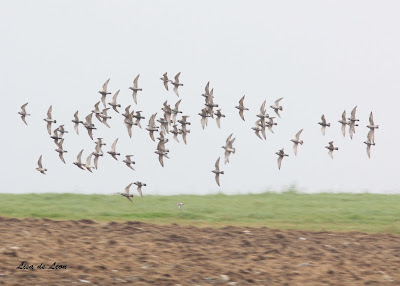 The American Golden Plover often behave in a similar way; however, more often than not the will show up in a farm field or sod farm. This shot shows one stray Semi-palmated Sandpiper tagging along with the flock. 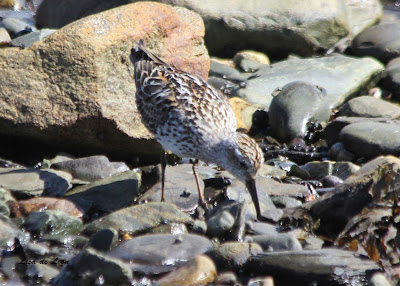 The White-rumped Sandpiper has been a difficult bird for me. Not that I can't pick one out when among the smaller peeps, but trying to tell the difference between a Baird's and a White-rumped has proven impossible. As a result, I have missed the opportunity to see a Baird's at St. Shott's beach for two consecutive years. Next year, I am going to follow a more experienced birder to this location in the hopes of finally seeing a Baird's! 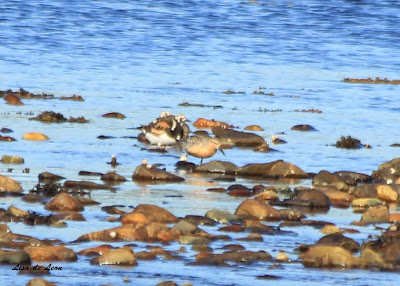 Among the best shorebirds I saw this year was the Red Knot. This one stayed in Renews long enough for several people to see it. It, indeed, looked quite red in the evening light. A Ruddy Turnstone, also appearing in this photo, was one of three on the beach that day. There seemed to be less of this species around this year. 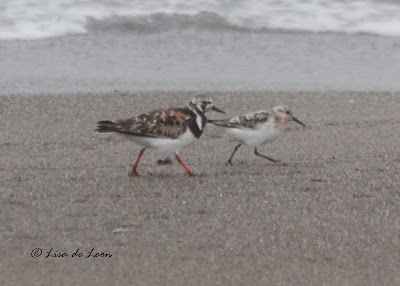 Also scarce this year was the Sanderling. I saw only about four this year. None showed up at Bear Cove Beach which in previous years has been crawling with these little birds. Oh, yes, I missed a Short-billed Dowitcher altogether this year. 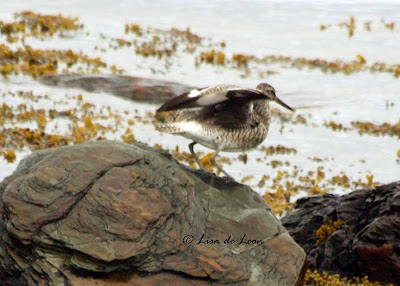 Annually over the last three years, a Willet has appeared at Renews Beach. It seems to stay around for a while, but there was really no guarantee to see it.  I got lucky this year, catching a glimpse of it while waiting to see a Tricolored Heron. 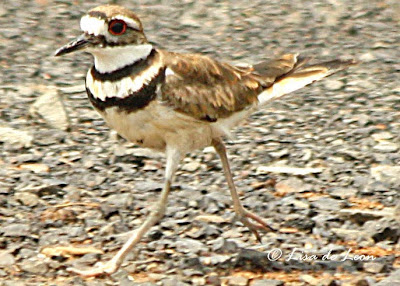 On the same day, a Killdeer that had been frequenting the same beach put in a brief appearance. 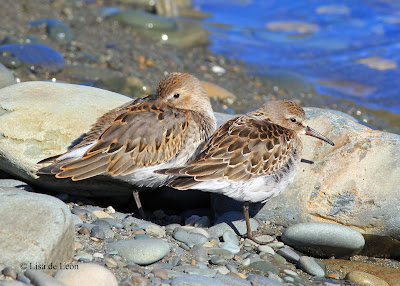 Dunlin are another of my favorite shorebirds. These were seen in St. Shott's in mid-September. 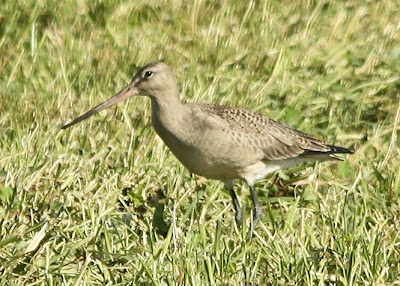 A Hudsonian Godwit will usually show up in or around Goulds each year. This year, two stayed in an out-of-the-way field for about a week before vanishing. 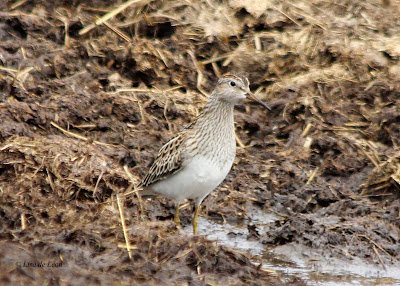 Pectoral Sandpipers are not a sure thing for people keeping an annual list, but there is a pretty good chance of happening upon one sometime during the season. This year I saw one in a puddle in Bear Cove and one in the tall grass in Cape Freels. Both sightings were totally unexpected given the locations. 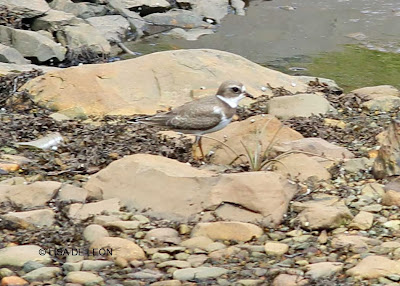 The only new shorebird I saw over the summer was this little Common Ringed Plover. It certainly was not easy to pick it out of the group of Semipalmated Plover appearing in varying plumage. However, this little bird was often separate from the others which is really what drew me to it in the first place. After watching and studying it for a while, I was pretty sure it was the Common-ringed. Actually, there were several differences between these two species as I reported in an earlier post about the rare bird at Renews.

And so, I have shown 19 species of shorebirds I saw this year on the Avalon. However, it really is no wonder I have very little confidence to identify all of them all the time. The truth is I spent less than three hours in total looking at shorebirds. Most of that time was lost to poor lighting and great distances. It is a rare event to be able to view shorebirds in Newfoundland when the tide is right, lighting is favorable, and the birds are present. At this rate, it will be many years before I "think" I know shorebirds.
Posted by Lisa de Leon at 7:04 AM