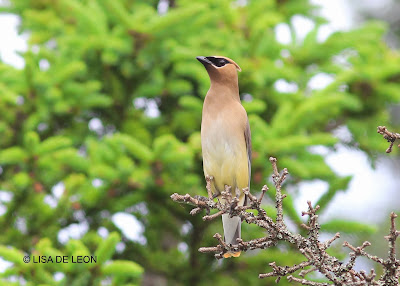 I saw my first Cedar Waxwing of the year on June 10 at Mundy Pond, and I may have seen my last one at Blackhead on October 2. It is hard to say, though, because in previous years there have been reports of Cedar Waxwings in most every month. 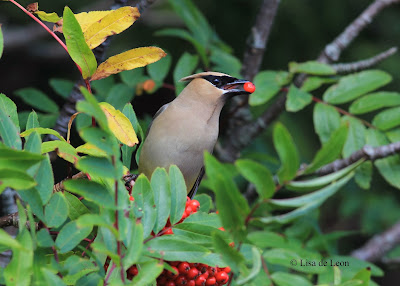 Waxwings are such stunning birds with very interesting behaviour. It is near impossible to pass them by without stopping for a moment of appreciation. 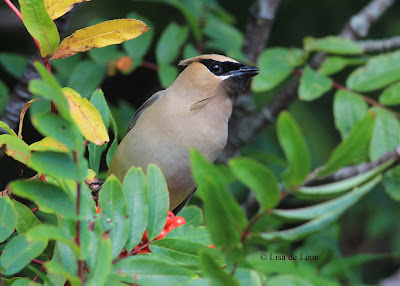 Whether these birds are catching flies in mid-air or settling in to devour an entire bunch of berries, they eat a lot. I watched an abundant crop of dogberries form on the trees in my backyard this year, gorgeous red pearls. I kept thinking no waxwing could pass up these bright red morsels. I watch and wait, but I may be waiting for a long time, because a flock of about 200 European Starlings moved in and within a couple of hours they pretty well cleaned four trees. What is left doesn't look enticing anymore. 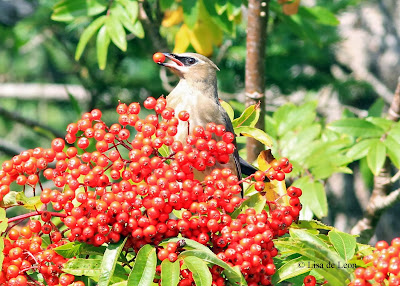 Throughout the summer, I saw at least one Cedar Waxwing on almost every birding outing. Many times, it was just one lone ranger, but as the summer ended, they began to gather into small groups. Often seen sitting atop a tree, one seems to stand guard while others dine. However, more likely, the high perch makes it easier for fly catching. 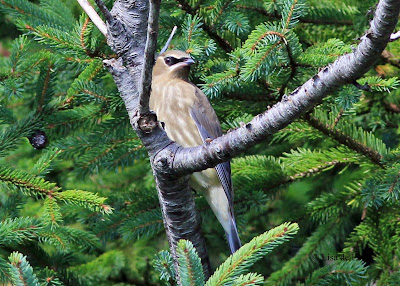 Often non-birders will describe a bird in an attempt to identify something they have seen. The key field marks of this bird make it easy to ID without seeing the bird: Masked, crested and red waxy tips at the end of the wings. It can only be a waxwing, but which one? This could apply to the Bohemian or the Cedar Waxwing.  The easiest way to differentiate the two is by the yellow wash on the belly of the Cedar or the reddish color under the tail on the Bohemian. 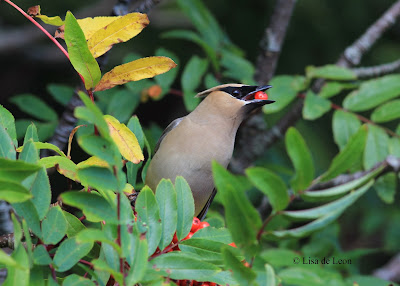 There have been sightings in the province where the two species have been seen in the same flock. Just a couple of years back, I don't think I could have been able to tell the difference. Now, if such a mixed flock appeared, I would no doubt enjoy accurately recognizing each one.
Posted by Lisa de Leon at 7:18 AM