Where are the finches? 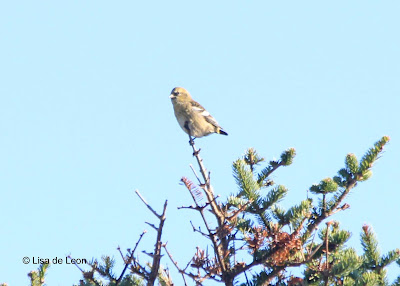 None of these pictures were taken over the last three months. In fact, it is pretty hard to find a finch these days.  The first two shots of this female White-winged Crossbill were taken in October. I do have one possible photo of one taken at Exeter Ave. last week, but the bird is so obstructed by branches, it is hard to tell for sure. 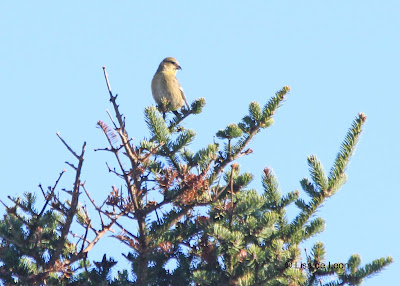 The branches in these shots tell the tale. In October, I can see what was left of a very poor cone crop.  As I look at the cone-bearing trees in my backyard, the story is the same. There are so few cones left that none of the usual finch have been showing up in my yard this winter. 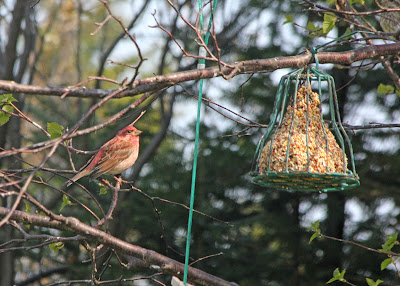 Even the Purple Finch is uncommon this year. There have been only three females hanging around the Upper Rennie's River trail. I have had one female come to my feeder, and I am aware of a report last week of one male Purple Finch at a feeder around town. This is such a contrast to last year when I saw dozens of these colorful birds eating berries in the snow on Strawberry Marsh Road. 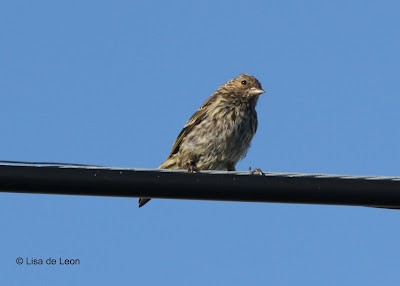 Even Pine Siskin have been hard to find this year. Again, I had only two drop by my feeder on two occasions this winter, not to be seen again. I am aware of only two feeders in town where small numbers can be seen fairly regularly.
I have seen small flocks of American Goldfinch about twice a week, often congregating around feeders, but the numbers still seem low. Red Crossbills, in small numbers, have been reported at two feeders on the outskirts of St. John's. There is not a single Pine Grosbeak to be seen anywhere. Although, the number of Evening Grosbeaks in the area seems to be steady this year as they gather at the same two feeders as last year. Basically, we have been finch-free this winter, and I miss the color and the activity these great little birds bring to backyards.  I, along with many others, eagerly wait to see the the Common Redpoll are going to drop in on us in the days to come.
With the Backyard Bird Count coming up, I will be watching closely to see how many finch, of all kinds, are reported.