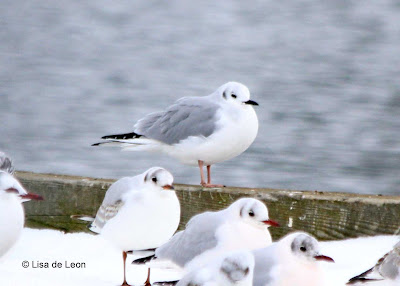 After much waiting, Mike Parmeter spotted our first 2013 Bonaparte's Gull at Pier 17.  It was thought there was one earlier in the winter, but there were no pictures to confirm it. Now there are! 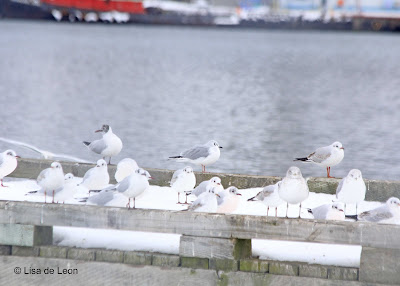 Viewing birds at Pier 17 is getting more and more difficult as the fences are up and viewing areas typically blocked, and all this is compounded by the tricky light in the area. It is either too dark or too bright or there is a direct glare from the sun. I was able to see this bird standing by the fence near the Terry Fox monument. It is quite a distance from that location to the area where the Black-headed Gulls gather, making it harder to see the detail on the birds. 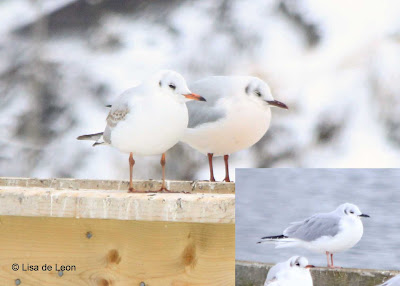 It is common for the Bonaparte's to associate with the BHG. Given the distance and the challenging lighting, it is necessary to scrutinize each gull in the flock.  Shown here is an adult BHG with an immature. The one on the right, when viewed through binoculars, can appear to have a black bill. It was only through pictures that I was able to discern that it was really deep maroon. However, there were other clues that this was not the Bonaparte's. This adult bird was the same size or slightly bigger than the juvenile standing near it. The Bonaparte's is actually an inch or two smaller than BHGs.  The insert of the Bonaparte's gives the best side-by-side comparison of the adult birds of both species. 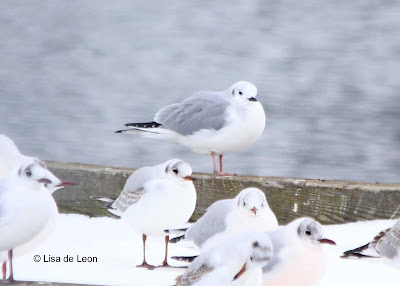 This is one of those birds that when you see it, you are sure. If there is any wavering in the identification, then it may well be the Black-headed Gull. I really wanted to see it up close, but no one offered to let me in the gate:-( 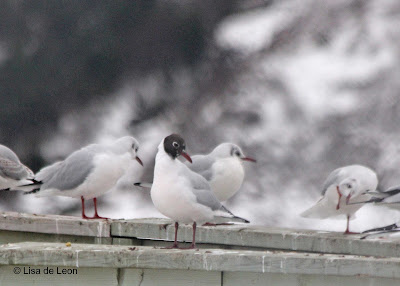 While at the pier, it was also nice to see this adult Black-headed Gull already changed into its breeding molt. There were several birds in varying degrees of transition, but this was the most advanced. We all know what that means - despite the cold, snow and freezing rain, Spring is, indeed, on its way.