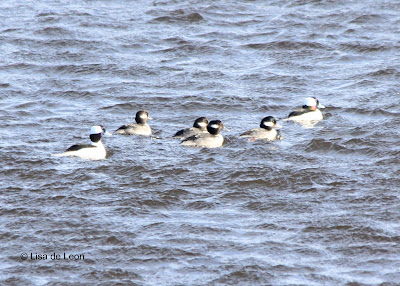 Last Thursday was a lovely day, despite the high winds. Margie M. and I took a drive around Conception Bay to see what we might find.  In the beginning, it didn't look very promising. There was nothing at Topsail Beach and very little at Chamberlains.  A check at Loretta's feeder yielded nothing. The temps were sitting at +6 degrees, and it was possible the small birds had moved to the woods. We finally saw our first Common Mergansers, quite a large flock of about 100 individuals, at the end of the arm in Holyrood. Farther up the road, we saw one interesting small bird cross in front of us; however, when we stopped, the high wind and traffic contributed to a very noisy setting and our efforts to relocate the bird failed. Then, there was Avondale - it is pretty much a "given" to see the Bufflehead in this area. Par for course, as soon as we drove out to the wharf, they immediately began to move off-shore. As we drove around Avondale, we had quite a good look at this small flock of Bufflehead near the road. 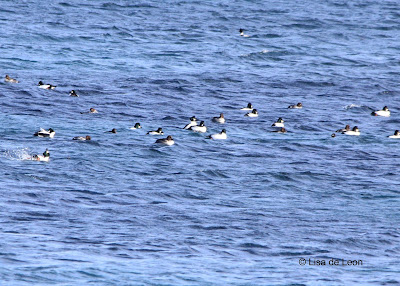 Then, it was on to Clarke's Beach and Spaniard's Bay. There was the usual  flock of Common Goldeneye, even more as we passed by on the return trip. With the distance, high winds and rough waters, it was impossible to get a fix on any single bird long enough to be able to look for the Barrow's Goldeneye. The ducks bobbed up and down, often swimming directly toward us or away from us. 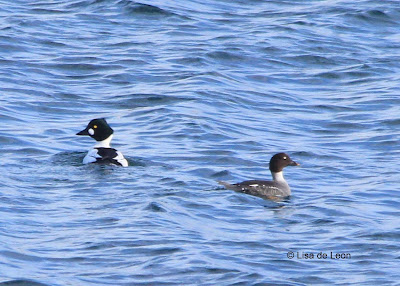 Reacting very quickly, I was able to get this "snap" of a pair of Common Goldeneye that happened to be swimming close to the road. Within seconds, they drifted off into the distance. 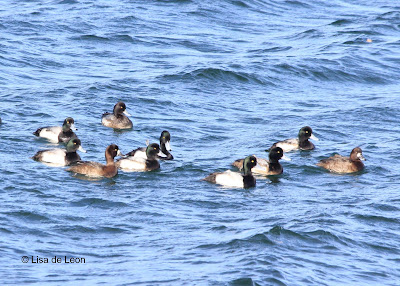 The best opportunity to look at sea ducks happened in Harbour Grace where this flock of Greater Scaup actually swam toward us. All in all, it was a great chance to see the expected species of sea duck that inhabit Conception Bay each winter. With no surprises and gale-force winds, we didn't linger long.

I like to make two trips to this area each year, one in the winter and another in late August or September to see the shorebirds that settle into the area.
Posted by Lisa de Leon at 8:40 AM