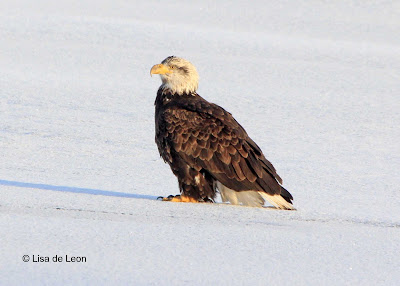 When I awoke yesterday and saw the nice day dawn, I decided to spend a couple of hours out in the sunshine. When I arrived at QV Lake this nearly mature Bald Eagle was attracting a lot of attention. It sat for awhile until another mature Bald Eagle flew by. 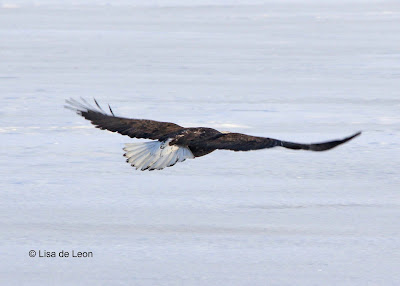 In no time this one flew off to join  the other. Next, I made a quick stop at Caledonia Place where there was a lot of feeder activity, but nothing of note. 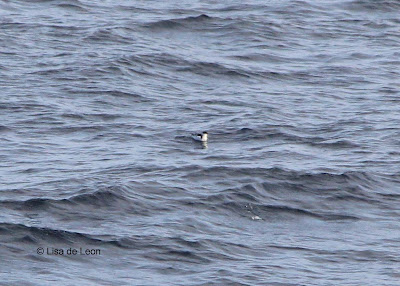 On the drive out to Cape Spear, I saw five Blue Jays. This was a high number as I haven't seen any for about a week. When I first arrived, I met Dave Smith. While we were talking, four small birds flew right over us. They were not juncos, and they were not Goldfinches. In hindsight, I think they were Common Redpolls.
From the lookout, I could see numerous Black Guillemots that are beginning to transition into their breeding plumage.  I tried to turn this little Dovekie (three sighted) into a murre, but when I got a good look at the side view, it was clearly a Dovekie. (Other birders on the scene spotted the Purple Sandpipers on the rocks below.) 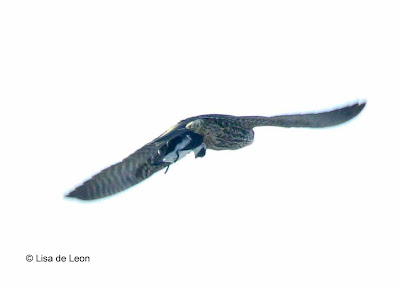 Then, when I least expeced it, I saw the bird of the day.  When I was driving away from the Cape, I spotted this raptor flying along the water's edge. I tried my best to get ahead of it so that I would have time to get out and take a picture. The bird kept up with me. Finally, it cut across the road, where I got a look at the underneath. I saw white on the underside and was really puzzled about what this very large bird could be. 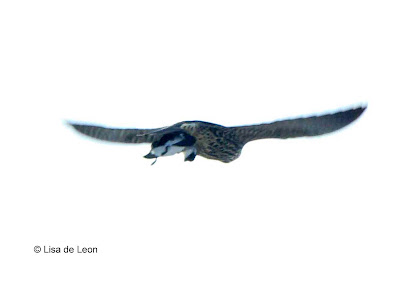 As it flew off into the woods, I grabbed the camera and got these two pictures.  I began to look at the pictures. With my eyes strained from staring into the light, I thought I was looking at a black and white barred tail. Catherine Barrett arrived and looked at the pictures. To my amazement, she pointed out the Dovekie hanging in this birds talons. Amazing! That was the flash of white I saw as it flew over.

Was this a hawk or a falcon? The pointed wings indicate a Falcon, a large one - either a Peregrine or a Gyrfalcon. These pictures had to be processed. I tried really hard to turn this bird into a dark-morph Gyr, but Paul Linegar and Bruce Mactavish both said the same thing: The barring on the underside of the wing belongs to a Peregrine.

It was really remarkable how speed, size, lighting and awe kept my eyes and attention focused on the whole bird causing me to miss the dangling Dovekie altogether.
Posted by Lisa de Leon at 7:37 AM