The Wigeons in Newfoundland 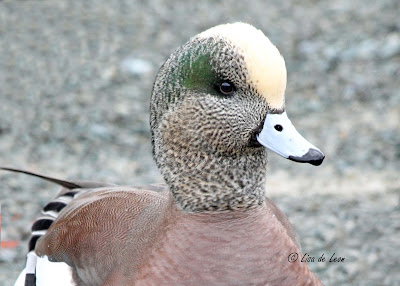 Last week, before the on-set of our real winter, I was at Bowring Park. There, I saw a female wigeon. At the time, I thought I would just check pictures when I got home to make the identification. That turned out to be a bit more complex than I initially thought.
It is easy to identify the male wigeons as their different head color is pronounced. This American Wigeon shows green while the Eurasian Wigeon has a reddish-brown  head. (Note 1: The American wigeon is sometimes referred to as a "baldpate," due to the white streak on the crown of its head. I don't know if this applies to the Eurasian or not.) 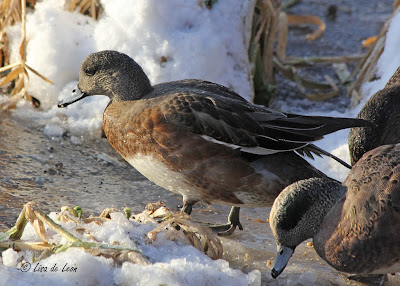 I don't think I have ever really given any thought to identifying the female wigeon, because I always assumed the female hanging with the male would be the same species. Wigeons begin to pair off when they reach their wintering grounds; in this case, Newfoundland. Pictured above is a pair of American Wigeons. (Note 2: I was surprised to see eBird considers the American Wigeon to be rare in Newfoundland. Perhaps that is because of a lack of reporting.  According to our Newfoundland Checklist, the Eurasian Wigeon is more uncommon than the American. I do believe the distribution of wigeons here this year will bear out the local rating.) 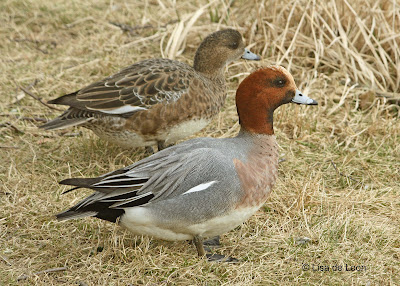 Here, I have a pair of Eurasian Wigeons. The female stays close to the male, and that is why I know what species she is. (Note 3: The average lifespan of a female wigeon is 1.7 years while the lifespan of the male is 2.3. I can't help but wonder why there is a difference.) 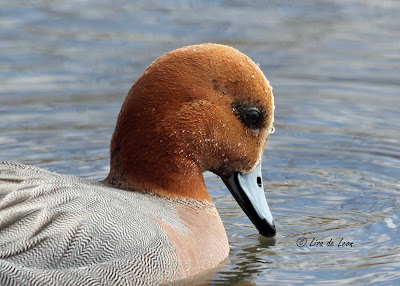 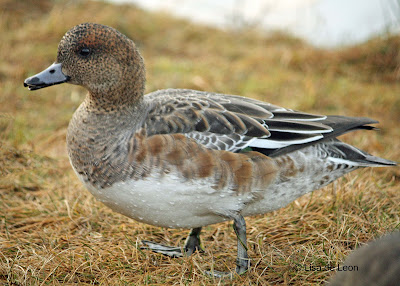 This picture of a female Eurasian Wigeon is probably the best example I have to match the description above.  The head does show a bit of rusty color.  In case you are wondering, this photo was taken on January 1, 2010, so the rusty color doesn't seem to be associated with breeding. But, what if the rusty color is not present, which is sometimes the case? There must be other field marks that differentiate these two species. 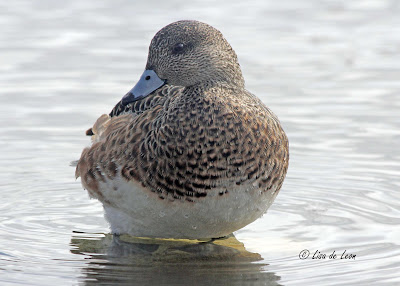 My Internet search turned up some very helpful articles. It seems I am not the only one struggling with this identification. (Note 4: Sources I found helpful are cited at the end of this post.) When flipping through my collection of pictures, I found this shot taken some time back in my Eurasian Wigeons folder. Now, I am having second thoughts. The sources provide info to cause me to re-think my ID on this female.  I elaborate below. 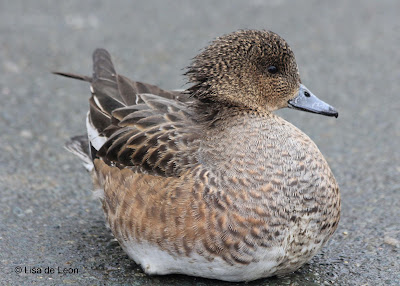 This is the bird I found on January 28th at Bowring Park.  The additional information provided by ABA and ADFO gave me a few more identifiers to work with. Color: The female American Wigeon will have a cold gray color on its head vs. the warm brown color of the Eurasian. The head of the Eurasian can be much darker than the body. Nevertheless, there is a lot of variation in head color, making it quite complicated to identify the birds with in-between colors. So what else can I look for?  Head shape: The Eurasian has a steeper slope from the base of the bill to the top of the head, which happens to be flatter than the American Wigeon.  Bill: The American Wigeon often has a black line that runs along base of the bill and a black line that runs along the side of the bill, referred to as a gape line. (Easily seen on the second picture above.) Often is the key word here. It is not always present. However, the gape line never appears on the Eurasian, so the presence of a black gape line indicates an American Wigeon. (Note 5: This dark line at the base of the bill is shown in the field guide but there is no mention of it.) 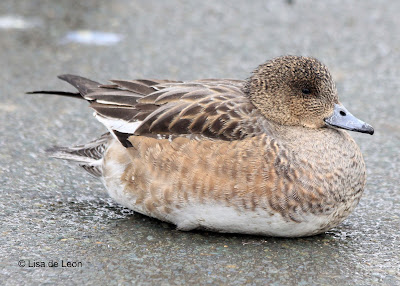 So, not being able to see the underwing, what wigeon did I see at Bowring Park. My guess is a Eurasian. This is why I think so: There is a steep slope from the base of the bill to the head, the top of the head is  flat, there is no gape line on the bill, there is no black line at the base of the bill , and the face is plain and darker than the rest of the body. Challenges: There is no distinct gray or reddish color on the head; I can't see the neck to see if there is a contrast between the neck and the breast. 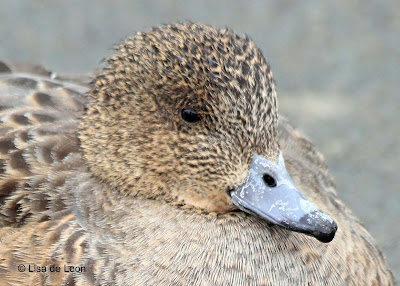 It can be really confusing when the field marks are only present sometimes and are so variable. The subtle variations make identifying a little bird like this very difficult. I made the call of Eurasian Wigeon based on the "whole is greater than the sum of its parts."  I focused on size, shape and overall color. Am I right? Would a make a wager on it? No.

The second photo in this post seems to best exemplify all of the field marks of the American Wigeon as shared above, and the fifth photo is the best example of a female Eurasian Wigeon that I have in my photo collection.

The great resources I studied when drafting this post were very helpful and provide a lot more detail than I have. For the interested, visit: http://www.azfo.org/gallery/EUWI_female.html
http://www.aba.org/birding/v37n2p156.pdf
Posted by Lisa de Leon at 9:07 AM