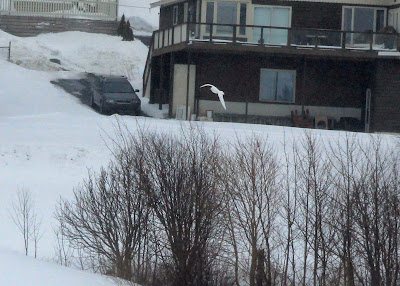 My morning started out in a routine manner as I drove to Goulds to see the Red Crossbills as I didn't have them yet for my winter list.  I got lucky. After 45 minutes of sitting outside on a cold bench, thankfully provided by the Barrett's, the crossbills flew in. 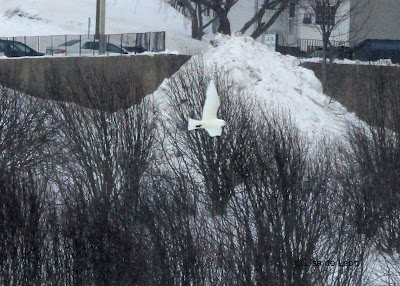 Then, it was off to Cape Spear where the wind nearly lofted me into the Atlantic. I couldn't wait to get back to my car. On the drive back to town I was shaking my head and wondering what I was thinking to have left the safety of my car! 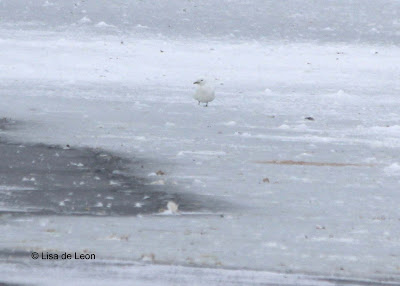 I stopped by QV Lake where there wasn't much happening. While sitting there, my daughter asked me to pick her up later than the appointed time, so I had time to spare. I checked Virginia Lake where the crows have taken over and one American Coot remains. I picked up a coffee and went back to QV to sit and wait for 1 p.m. to roll around. 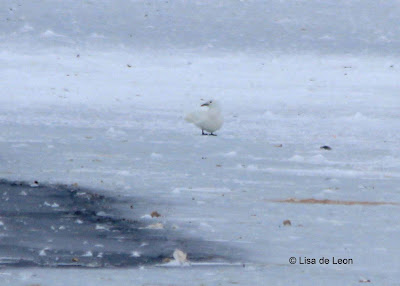 While sitting at the Virginia River outflow, I spotted a very small, very white bird sitting on the ice. Ivory Gull? Could it be? I was lucky again that Bruce Mactavish was sitting a couple of cars over. I hurried over to ask him what the small, white gull on the ice was. When he saw it, with eyes as big as an owl, he shouted, "IVORY GULL!" I thought he was kidding me. He wasn't! The proof is in the pictures! 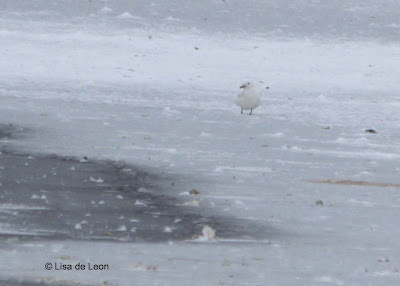 I hurried back to my car to grab my camera. This is a LIFER and a great one, too! We didn't have much time to look or take pictures. Within minutes of its first, distant sighting at around 12:40, it took off and flew toward Quidi Vidi Village. I had to leave, but returned to check the area again. There was no sign of it, but it can't have gone far. I went to QV Village where only the Gadwall was around.

What started out as a routine day, ended in a rush of excitement! You just never know what awaits, even in the terrible cold and gusty conditions of a winter's day.
Posted by Lisa de Leon at 2:10 PM