Rapt with this Raptor 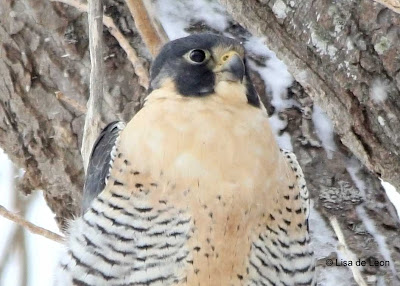 When I learned that I had missed seeing a Peregrine Falcon perched on a tree at Quidi Vidi Lake on Sunday morning, I was crestfallen. I had just taken a spin by there on my way home from an errand.  I lost sleep over that one. 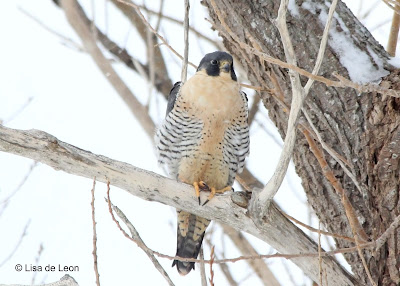 On the off chance that the Peregrine might still be around, I headed to QV mid-morning on Monday. There it was, large as life, sitting in a tree. My spirits lifted, so much so that I tolerated the cold and trudged through the snow to get a closer look. 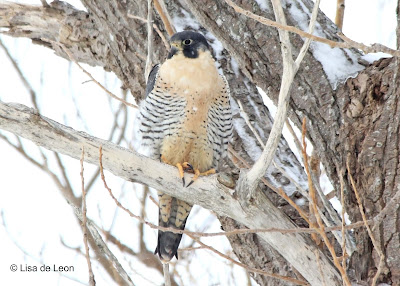 It was worth every minute of battling the elements to see this handsome guy full-on! I have seen Peregrine Falcons before, but only at a distance and always on the fly. This was pure gold! 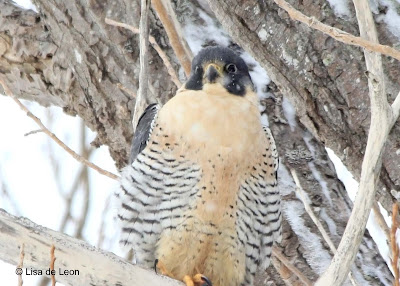 Otherwise known as the "Duck Hawk," this bird is known to be the fasted creature on earth, capable of reaching over 300 km/h when in a high-speed dive (a stoop.) I guess that's why I never really saw it before, even when I saw it. 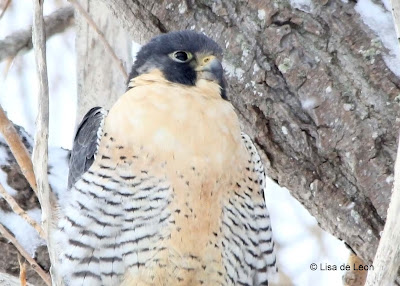 Males and female Peregrine Falcons look very much alike. As is typical of most raptors, the female is larger than the male. I was quite surprised by how small this bird appeared when sitting, so I venture this is a male. 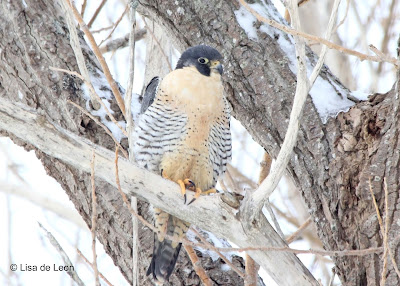 This falcon is known to perch in trees, usually near water, to have a clear view of the area, and that is where I found the falcon again this morning, scanning the whole west end of the lake.  (I couldn't help but feel bad for all the ducks and pigeons cowering together on the ice and shoreline. The resident otter was popping up all around the edge of the ice, and the falcon was overseeing all of the activity. The birds were doubly uncomfortable.) 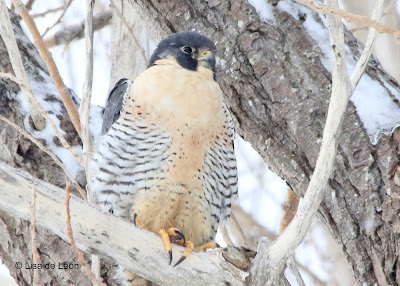 The Peregrine Falcon is best known for snagging its prey right out of mid-air. The falcon may fly above its target, then go into a stoop to dive-bomb the prey, stunning or crushing it with its talons. They are also fast enough to catch right up to its prey from behind. Often, the Peregrine will sweep back around quickly and catch the falling prey in mid-air. What a sight that must be. 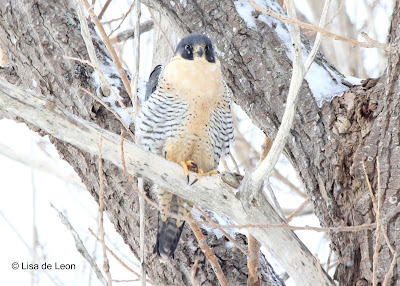 It is reported that the favorite meal of a Peregrine is a duck or pigeon. Is it any wonder, the ducks at the lake are having an anxiety attack? Yesterday, Richard Johnson photographed this falcon having a meal on a European Starling. The Peregrine Falcon needs to eat about 2.5 Oz per day, equal to about two blackbirds.  A healthy European Starling weighs about that, but that is not "dressed" weight. (The falcon will patiently pluck the bird before eating.) It is likely the Peregrine would need equal to two starlings a day. 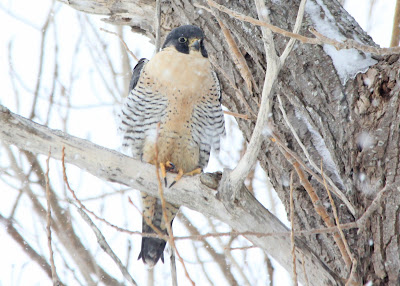 If this falcon stays at QV for a while, it is possible (twice a day) to witness the full cycle of hunting and eating. All of this is so amazing, I find myself tempted to pack a lunch, a thermos of hot coffee, and a blanket to comfort me while I sit in my car waiting to witness this first hand. 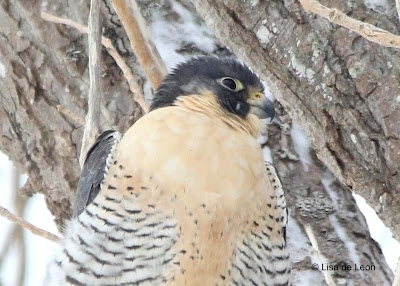 The Peregrine Falcon is one of the largest falcons in North America, with a wing span of 29 to 47 inches. That can be up to 3.5 feet. The one I saw at Cape Spear a short while back was every bit as big as that. I couldn't believe my eyes as it dwarfed the 9-inch Dovekie it was carrying. 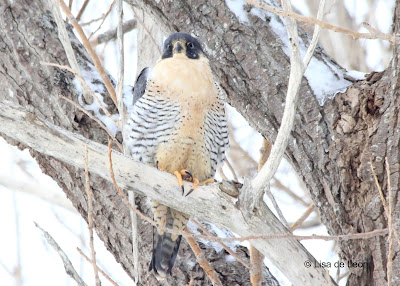 Since Peregrine Falcons mate for life, I find myself wondering where the mate might be. Do they travel together or do they reunite before breeding season? These birds are known to travel 25,000 km in a year; in fact, the meaning of peregrine is "wanderer."
After nearly three years of looking up, this was without a doubt my best opportunity to see this uncommon visitor to St. John's. What an impression he has made on me!