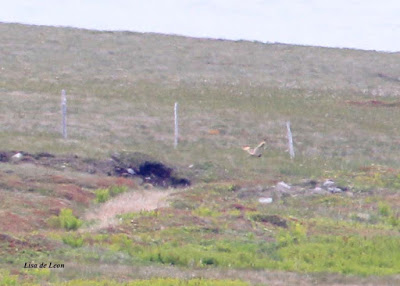 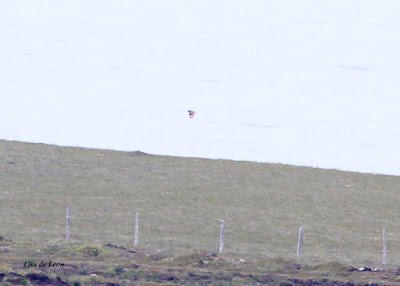 Yesterday was one of those rare warm, windless days AND a free day that came together to send me flying out the door at 5 a.m.for St. Shott's to try to see my first Short-eared Owl. Of course, I got distracted along the way and only arrived at noon. I stopped by the beach to look for the Little Gull with no luck. While there, I saw a flock of about 15 birds (I thought were Whimbrel) fly in and land at the tip of the sod farm. 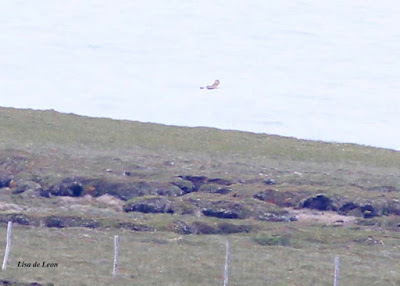 I then headed straight for the sod farm and began my long wait for the owl. After about an hour of sitting behind by bug shield consisting of my sprayed hat and and my spray-soaked window frame in my car, I decided to go behind the building to try to see the Whimbrel.
As I scanned the area, all of a sudden I saw a light brown bird in flight showing a very wide wingspan. What was that? I stared in my binoculars going through the process of elimination. It finally dawned on me to get a picture. I raised the camera, but because the coloring of the bird blended in so much with the background, I couldn't see it at all. I just pointed in the direction I thought it might be flying and snapped one shot. Got it! Then, I caught sight of a bird flying out over the water near the tip of the land. I again gambled with the camera rather than the binos and got these few shots.

While I wasn't sure I had actually seen the owl, I continued to wait and look around. After two and a half hours, I gave up and left, hoping my pictures would confirm the bird I saw was an owl. As bad as the shots are, they clearly denote record shots of a Short-eared Owl.

After the flurry of owl action, I continued to scan the ground looking for the Whimbrel. It was then, I caught sight of movement in the distance. 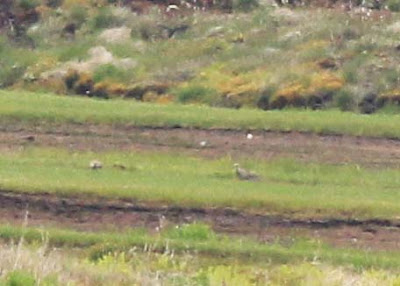 It was really impossible to see the birds through the camera, so I found landmarks as I viewed them with the binos and pointed my camera in the direction of the landmark. 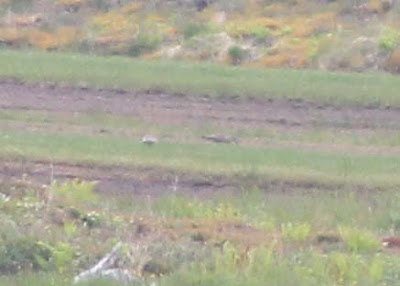 Once again, I was confused. These birds didn't look like Whimbrels. The beak was too short, the body too elongated and the coloring was not right. What were they?  They are ot gulls. In the first shot of the different birds is one bird with its head up. Underneath, it seems to have black markings like a Black-bellied Plover, but again the elongated shape of the bird doesn't seem to fit a plover.

In one shot I counted eleven birds. If I had known the ID of these birds was going to be so troubling, I would have walked out through the mud to see them better.  Every day of birding continues to challenge me. I have asked for help to identify these birds. 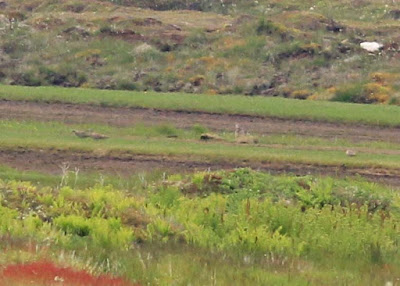