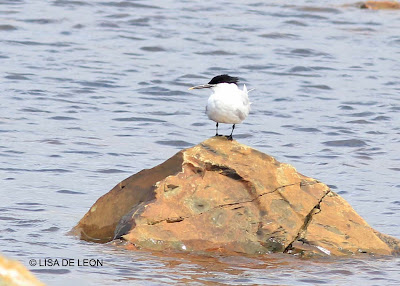 O
Over the last few weeks, we have had several schedule-busting birds arrive on the Avalon Peninsula in Newfoundland. Among the birds have been a Franklin's Gull in Witless Bay, a Tricolored Heron in Renews, and most recently, this Sandwich Tern in Renews. Given the crazy-high winds we have been having for weeks, I am not surprised!  Anything could blow in from anywhere! 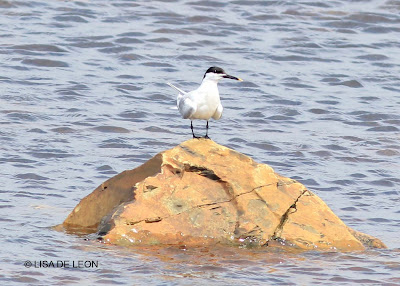 This great Sandwich Tern was found by Lena Senko who along with Chris Benesh is guiding a Field Guide tour comprised of birders from the U.S. It was our good luck, because this bird could have blended in so well with the Common and Arctic Terns in the breeding colony that we may never have known it was here. 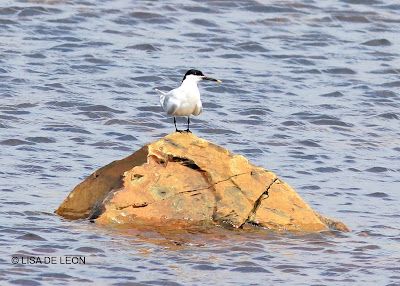 When word came on June 30th that this bird was in Renews, I couldn't get away to go look for it. UGH! Yesterday morning, I got up early and decided on the spur of the moment to not let this opportunity pass me by. 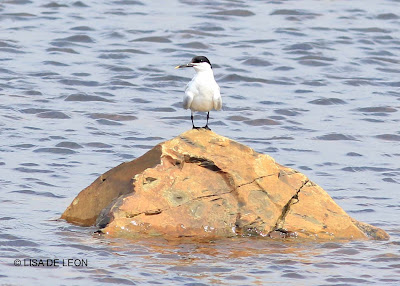 I was on the road by 6 a.m. to go look for this Canada Day wonder. By 8 a.m., I was standing with several other birders with my binoculars screwed into my eye sockets scanning every rock and every tern in the area. Nothing! 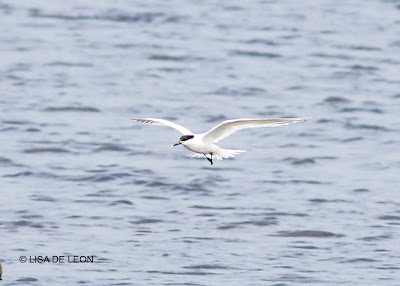 By 10:30, I headed back home to keep my appointments for the day, disappointed the trip didn't turn out differently. I couldn't help but stop in several places to look for some other birds that had been reported, just to lift my spirits a bit. With no luck, I was on my final stretch of the drive home. It was then my phone rang - the Sandwich Tern had appeared. 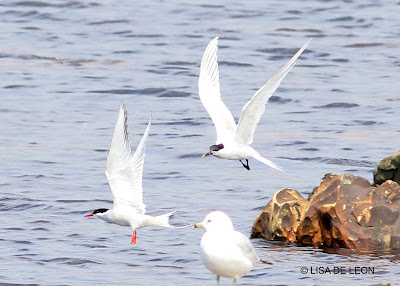 Quickly making the call home that I would be later than originally thought, I turned around and headed back to Renews. I was 12 minutes late! Nevin and Jane Foltz had been within meters of the bird, but no more. It was gone! 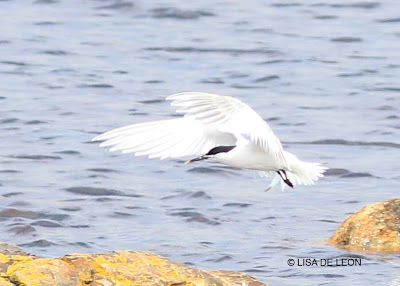 Double UGH! I lingered longer than I planned and watched the tide creep in and cover the rocks, one by one. What were the chances the Sandwich Tern would return if there were no rocks to sit on? 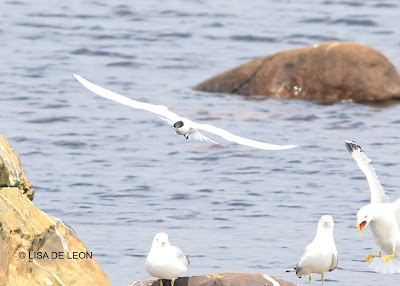 Nearly two hours later the Foltz family left and the Barrett family took a quick run to get something to eat in Fermeuse (only minutes away.) 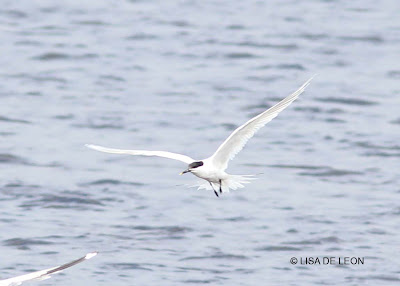 When everyone left, I repositioned my car to better see out my side window instead of the front window AND to be able to get out of the wind! 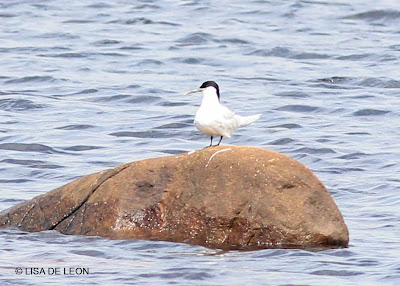 I began once again to scan each tern sitting on a rock when all of a sudden, I saw a black crest blow in the wind. What? Could that be it? How long was it sitting there? I took a quick shot before I moved to a location where I could get a better look. That was it - sitting right before me. I quickly called the Barrett's to get back "right now!" There was no guarantee it would stay. I watched it as it preened a bit, and then suddenly lifted off. Oh no, was it leaving already. It took a spin around the area and landed on a rock farther from shore.  I was relieved when Catherine and Paul drove up, and the  bird was still there. 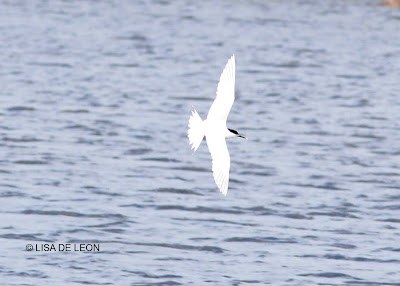 I included several of the flight shots above because they show the long wings very nicely. Also above, there is a shot of the Sandwich Tern with an Arctic Tern which provides a good comparison of the two birds. Oh yes, the minute my eyes locked on this bird, the sun popped out. And so, our special Canada Day fire cracker continued to awe viewers during the day. There seems to be a good chance it will stay, but catching it without using up a whole day will be the trick. The pattern of the last two days has been a mid-morning visit, mid-afternoon visit and a late-evening visit.
Posted by Lisa de Leon at 7:27 AM