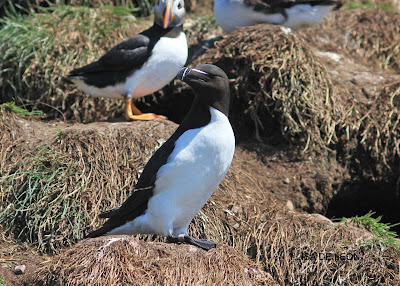 According to Audubon, the Razorbill is the closest living relative to the extinct Great Auk. Among the thousands and thousands of black and white birds nesting in Witless Bay, the Razorbill really stands out with its powerful, stocky bill. 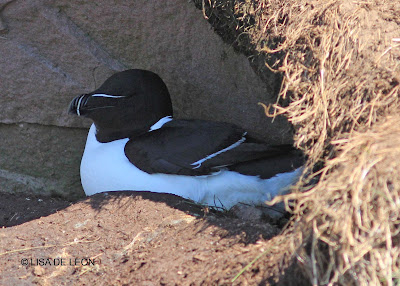 Razorbill showed up in nearly every picture I took of the birds on the island, seen standing guard or tucked into some safe place probably sitting on an egg. The male and female take turns with the sitting duty, but it is the male that leads the juvenile out to sea where it matures. There was no sign of any young Razorbills anywhere. 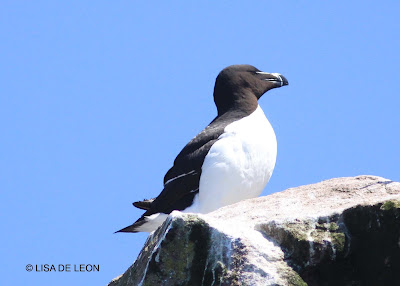 There seemed to be an increased number of Razorbills since my last visit to the colony two years ago, also noticed by our tour guide.   Only about 7% of the world's population of Razorbill nest in and around North America, and unlike the murre, Razorbills gather in small groups. 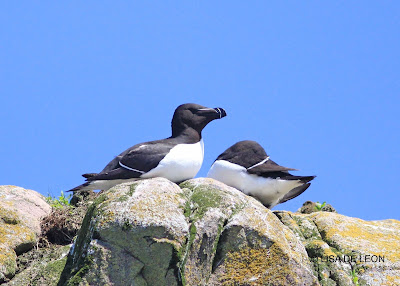 Male and female Razorbill look the same, except the male is larger. It is my guess this is a pair. 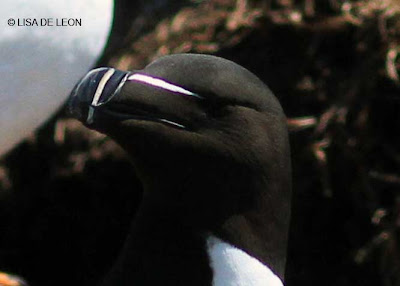 At this breeding colony, the only predator that may threaten the Razorbills would be the Great Black-backed Gull. Fortunately, there were not very many seen around the island. 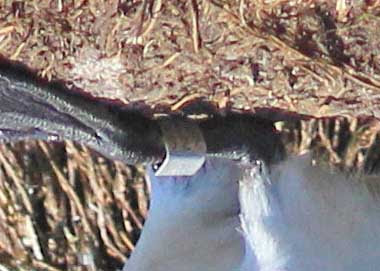 While out last week, I got this picture of a banded Razorbill. Communications with Alexander Bond revealed that approximately 100 Razorbills have been banded in Witless Bay over several years. I also learned the shape of the band for Razorbills and Murres is triangular and the top of the triangle should point upward. Over time, this band twisted and is now upside down. By flipping the picture upside down, and enlarging the photo a lot, I came up with the number 47927. Alex has sent this number to reportband.gov in an effort to learn more about the bird.

The oldest known Razorbill was banded as a nestling in 1962 and reportedly relocated in 2000. That would make the bird 38 years old and still going.  I often find myself wondering where a bird has come from and where it is going. Maybe in this case, I will actually get a little information to satisfy my curiosity.
Posted by Lisa de Leon at 7:35 AM