Close-up of a Ruffed Grouse 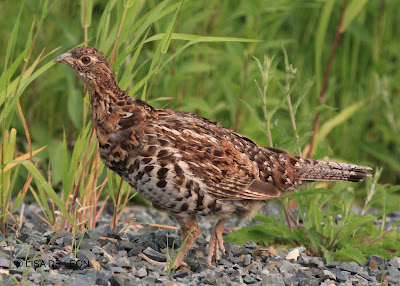 Often when I am just out for a drive, I will spot a wandering Ruffed Grouse. Sometimes they scurry into the woods, and other times, they seem so confused that they just meander around the area. 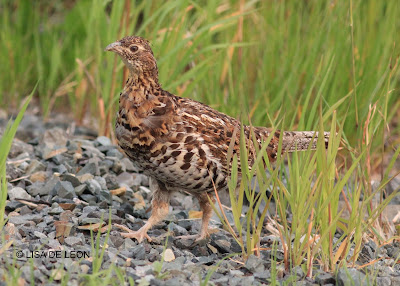 This game bird, introduced to Newfoundland in the 1950's, is very common. I've been told that one of the best times to see them in trails or along the road is following a rain. Apparently, they don't like getting their feathers wet, so they move out into the clearings to avoid that. In keeping with that behaviour, it would be likely to see them in the early morning as they may move out to avoid the dew. 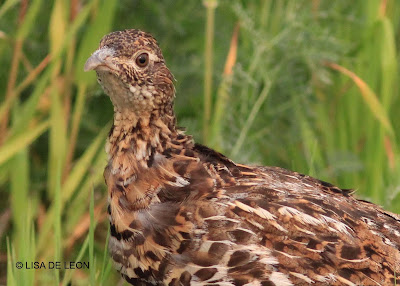 I took advantage of last week's viewing to get some close-up shots in order to study this bird more closely. While it is not the most handsome bird I have seen, it really is quite charming. Perhaps, it is the innocence nature of this bird that is appealing. Its beak and claws are not really designed for defence. Instead of fighting, it most often freezes in place in the hopes that it can blend in with its surroundings and not be seen. The sad part of that is much of the time it is just standing out in the open, making it very easy prey. However, that hasn't affected the abundance of this species in the province. It can lay around 10 eggs once a year, but by the end of the summer only about half survive. Nevertheless, that is enough to keep the population up. Being a game bird, it often falls victim to hunters. As well, it is not too smart hanging around the roadway as I have come across many who have met their demise there. 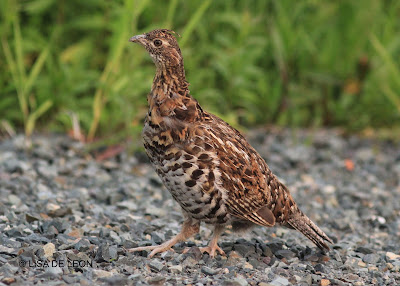 On the same day that I saw this red morph Ruffed Grouse, I decided to walk down a trail I had never travelled before. About a km. into the trail, a grouse scurried across the trail about 20 feet ahead of me. I couldn't relocate it, but I'm sure it was a gray morph. Is that possible? Were both the red and gray introduced? Can a gray morph spring from a red? Was I seeing things? I looked for pictures of NL grouse, and in some of the shots there do seem to be gray birds. I have never taken a picture of a gray one, and for me, I really prefer to have hard evidence before me to confirm a sighting. Until I get that, I will certainly stop to look over every grouse along the way.
Posted by Lisa de Leon at 7:01 AM