Townsend's Warbler: The Bird of the Hour 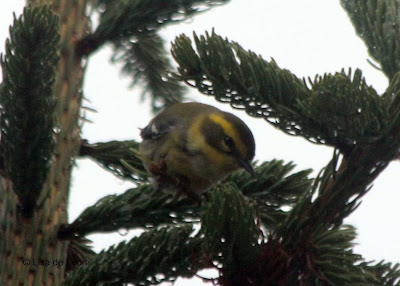 Each year, the Christmas Bird Count is held on Boxing Day (Dec. 26) in St. John's. The day begins with enthusiasm and excitement, in the hope that ole St. Nick has left a prized bird under our tree. One of the best possible locations for such a gift is along the Waterford River. As John Wells and Chris Brown covered their beat in that area, they found what we were all hoping for - a rare bird, in the form of a Townsend's Warbler! 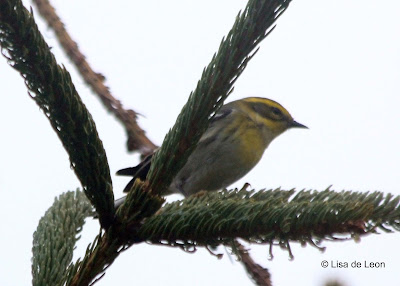 By the next day, word spread and the banks of the Waterford River were filled with birders, going this way and that in the hopes of getting a glimpse of the Townsend's. I was among them, but left before the Townsend's put in its appearance. 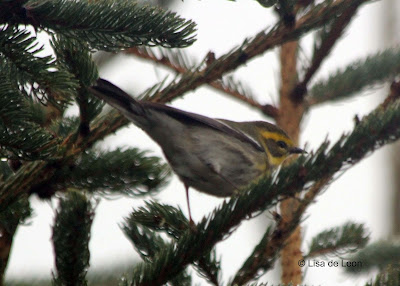 In fact, it took me four trips before I hit the jackpot. Yesterday morning, I stole away from my responsibilities and planned to stay for as long as it took. First, I saw a Song Sparrow. That was a good start. Then, the visiting female Red-breasted Merganser came swimming up the river. That was even better as I got my best ever look at that bird. 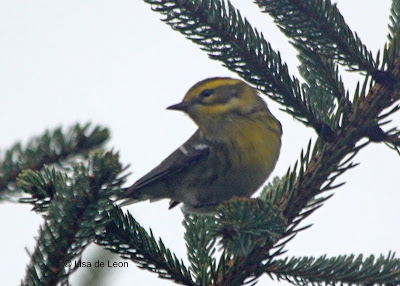 Then, there was a lull when nothing was happening. However, I was not going to get discouraged. This bird was going to show up. Soon, a Yellow-rumped Warbler put in an appearance. It was getting better. 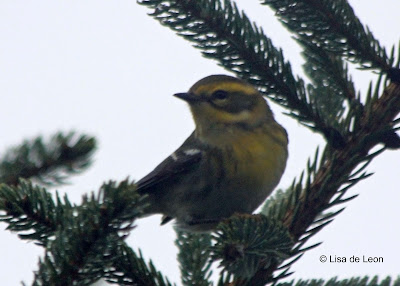 Once again the woods were still with nothing moving. It was refreshing when a couple of Black-capped Chickadees came flying in, followed by a few juncos. While watching them, my eyes almost popped out of my head. There was the Townsend's Warbler, not ten feet away. It stayed around for about seven minutes, peeping in an out of the evergreen. Not only had I seen this rare bird, I saw it well.  Two hours of patience really paid off. Check Bruce Mactavish's blog linked on the right side of this screen to learn about just how rare the great little bird is in St. John's.

The bird looked healthy and quite active.  The mild weather we are having may be just what this bird needs. ﻿
Posted by Lisa de Leon at 2:17 PM