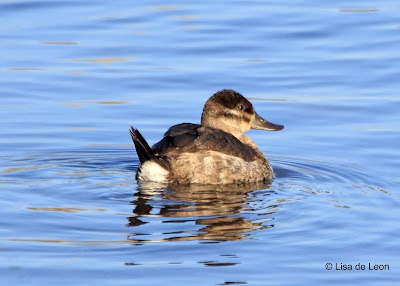 With a few minutes to spare yesterday before an appointment, I pulled over to scan Quidi Vidi Lake. This location has a history of providing surprise after surprise. Yet, I must admit, usually I don't find anything special. Then, there are those intermittent times when some unexpected, come-from-away bird has blended in with all of the local birds. Yesterday, was such a time. 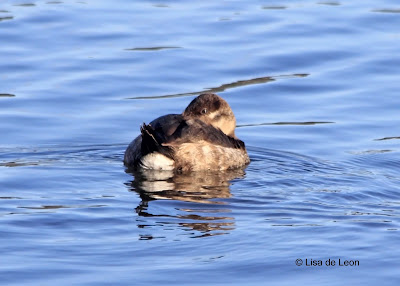 I began my typical scan of the edges around the lake and spotted an unusually stiff tail sticking out among the diving and domestic ducks on the far side of the lake. Could it be?  I honed in on it with my binoculars and was delighted to recognize this little female Ruddy Duck. I didn't have my camera with me, so I knew I would have to return as quickly as possible. 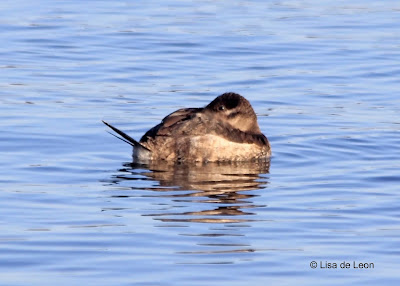 We have had the occasional Ruddy Duck pop in during migrations, but it is particularly unusual for one to show up in Winter. These birds should be in California (where they are year-round residents) or wintering considerably south of the Mason-Dixon Line.  It is very common to see this little duck all tucked in, drifting to and fro. It is interesting that they are also able to just sink below the surface when threatened.  I checked the Newfoundland Winter Bird List and found the last reported (winter) visit of a Ruddy Duck was in 2008-09. There seems to be no confirmed record before or after this time, until yesterday. 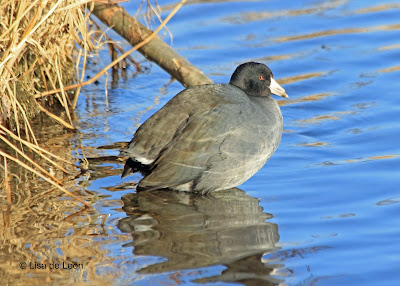 Tucked in the brush nearby was this plump American Coot. Despite the fact that this bird should be wintering in the Southern U.S., we get several coots show up every winter. Often times, one will settle in at each of the ponds in town, but as the ponds begin to freeze over, they congregate at QV Lake. It is then that I am often amazed by how many there are.
It is now the time of the year for me to begin reviewing and reflecting on my birding experiences for 2012. Sharing of this year's activities, will likely warrant several posts.
﻿