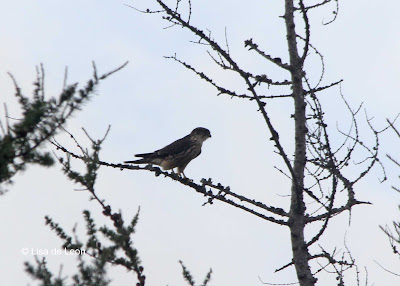 It was early on August 31st when I was driving up Power's Road that I caught sight of a Merlin sitting in a tree. I wondered if it were the same one I had seen on Petty Harbour Road only a few days earlier. 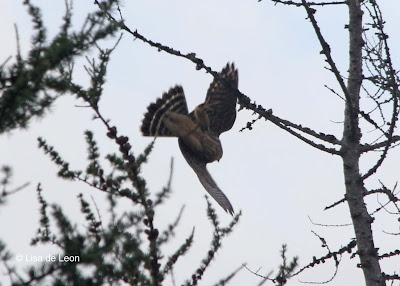 He was making noise and seemed very active.  I quickly pulled over and began my walk into the interior of Bidgood's Park to get a better look. 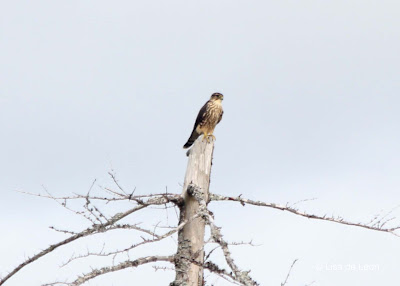 As I entered the edge of the boardwalk, I spotted the Merlin again perched high atop this  dead tree in the middle of the marsh. He had purpose in his eye. 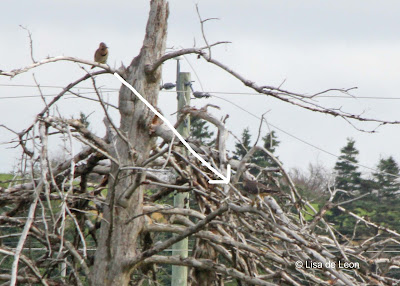 Though quite some distance away, I was close enough to watch one of the most elementary scenes of survival. The Merlin was hunting for breakfast, and one of three Northern Flickers was on the menu. The three flickers were quite good at interchanging locations and confounding the Merlin. It did seem a game to the flickers, because there was plenty of space for them to fly away to safety. 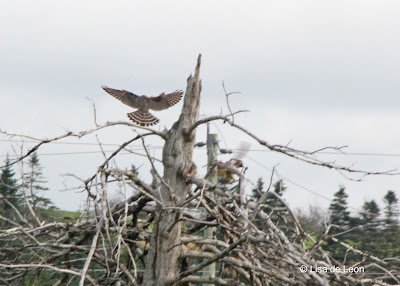 As soon as the Merlin made a move, the flicker took off. 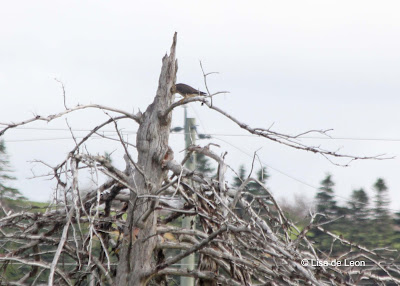 The perplexed and hungry Merlin would settle in again and wait for the return of the flicker. 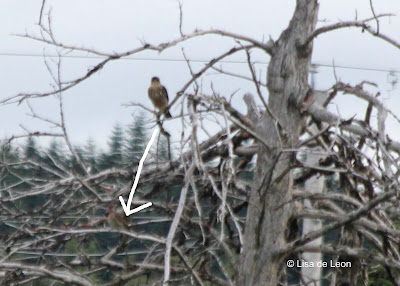 Bold as brass, a flicker would return to the tree to once again taunt the Merlin. 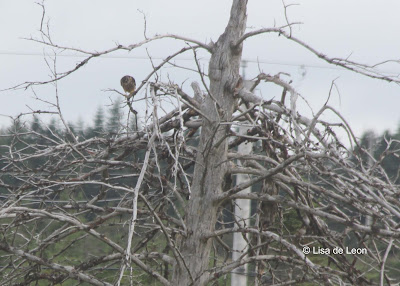 Then, it would disappear, leaving the Merlin even more dizzy. 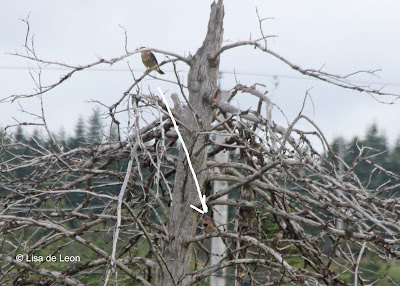 The Merlin waited patiently and scouted around. A flicker would once again move back into the tree within feet of the Merlin. The other two flickers were in a distant tree taking turns and egging each other on. As a spectator to this "cat and mouse" challenge, I was captivated. 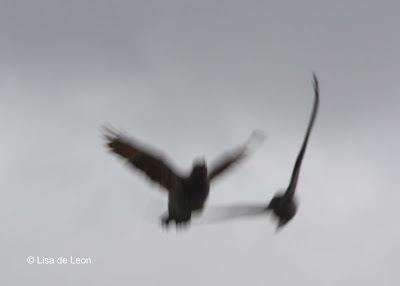 Then with a burst of speed and intent, the Merlin leapt in the air, the Northern Flicker bolted and both flew straight toward me.  I was really hoping this wasn't going to be "it" right in front of me. 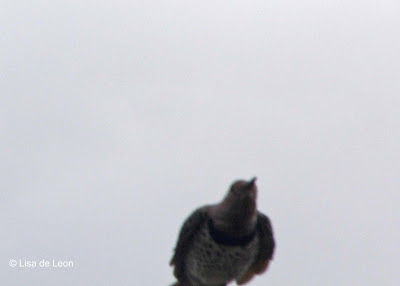 The flicker once again prevailed and perhaps, thought this encounter was too close for comfort because all three flickers flew deep into the woods and didn't return.

A Merlin feeds on small birds, rodents, bats, and reptiles, as well as large insects such as dragonflies, which are especially hunted by fledglings in the late summer. Among the small birds typically consumed by the Merlin are starlings and small shorebirds.

After witnessing this, I found myself wondering how much a Merlin needs per day to be healthy.  It seems the need varies depending on the gender, size of the bird and the season. A smaller bird needs to eat a higher percentage of body weight than a larger bird. The male Merlin weighs approximately 180 grams (6.34 oz) and the female weighs approximately 230 (8.11 oz) grams. Therefore, the male Merlin will need to consume more food in a day than the female. Why is it that the smaller bird needs more? Because the smaller bird has less volume in relation to surface area, thus causing them to lose body heat faster.
The Merlin needs to eat between 15 to 21 percent of their body weight per day, depending on their size. With a general weight range between 6.3 (male) to 8.1 ounces (female,) The female will need to eat approximatly 1.2 ounce of food per day. A typical sparrow weighs about .5 ounces. That suggests a female could make do in a day with a diet of  2 sparrows and several dragonflies. (Note: Female raptors are usually larger than males.) The male Merlin could need as much as the equivalent of 2.5 sparrows per day plus several dragonflies.

Given the size comparison of my Merlin to the flicker, I think this was the smaller male looking for his breakfast on this day in August. Considering that a Northern Flicker can weigh from 4 to 6 ozs, what would happen to the leftovers? The Merlin will cache its food and return to it at a later time. A good catch like a flicker could mean this Merlin would not have to hunt for several days.
The average life span of a Merlin is 15.5 - 16 years.
The average life span of a Northern Flicker 5 years. I wonder if this is impacted by its being hunted.
Posted by Lisa de Leon at 10:17 AM