Northern Pintails Mix it Up! 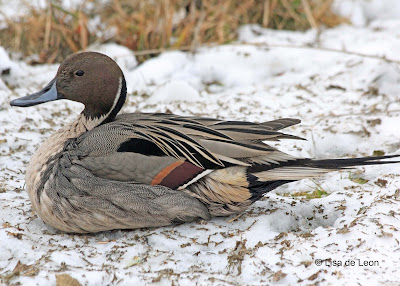 When I think of the Northern Pintail, I envision the handsome brown-headed male with flowing feathers and fall-colored wing bars. 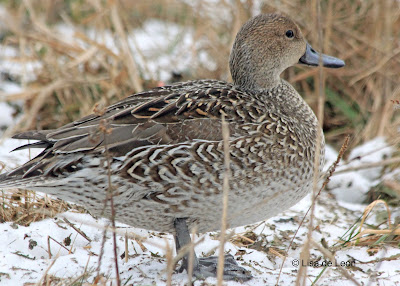 Or, I think of the more plain female of a smaller size. The long neck is less pronounced, and the plumage is very plain compared to the male. I pretty well thought I had the Northern Pintail all mastered. 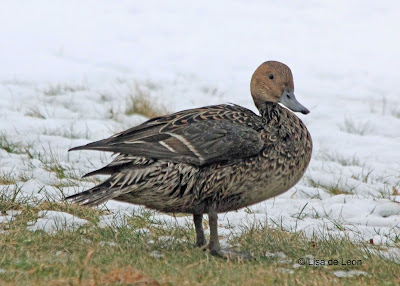 That was until I caught a glimpse of this one on Wednesday. It is a Northern Pintail, the head, neck and beak tell me so. But what is up with this plumage? I stared at it for quite a while trying to decide if this was a male or female. Thinking this was quite unusual and reaching no conclusion about what I was seeing, I headed back to my car. 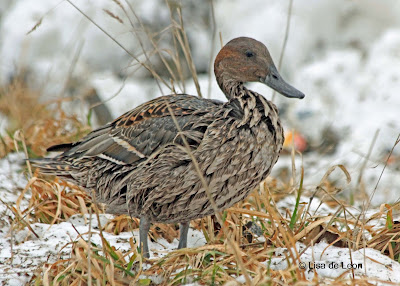 On the way, I saw another bird, just like the first. Well, maybe this isn't so unusual. I stopped to study this bird a bit. Immature Northern Pintail are reported to look more like the female. Is this an immature male? An eclipse male? It seems late for an eclipse.  It certainly seems to be the size of a male, but the wing bars more resemble those of a female. The head is turning brown which suggests this is a male. There is no male pintail, but this happens during molting. 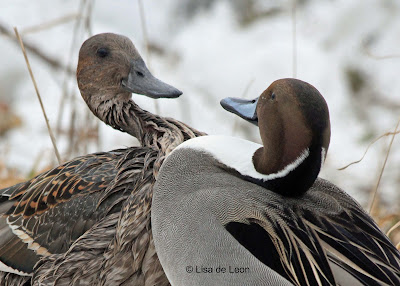 I was just standing and thinking when all at once, a typical male pintail approached the mystery pintail. He got right in his (I am leaning toward a male) face, for no reason at all. The wet pintail was just standing there grooming, probably trying to dry up a bit. 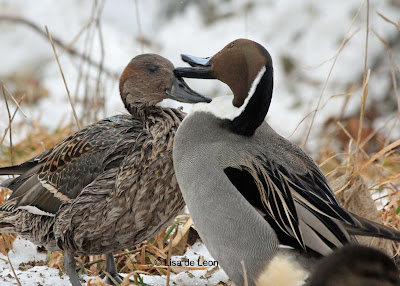 The mature male took the first strike. Why? I do know that pintails pick their mates at this time of the year and are among the first to lay their eggs in the spring. Was this associated with mating? 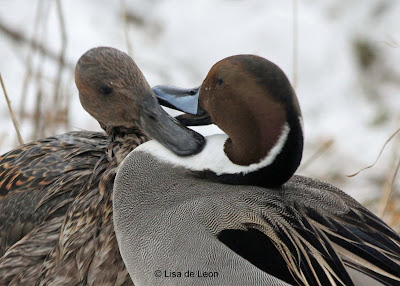 Well, the wet one was not going to take this, he struck back. It looks more like gentle whisperings, but this was no hug...it was a full-frontal attack. 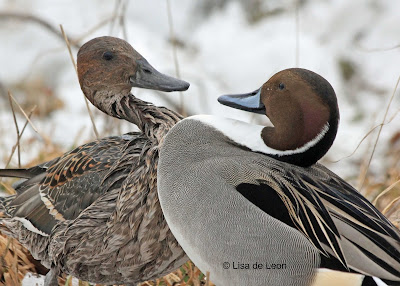 The pintail on the right reared back and looked at the other, maybe thinking "you weren't supposed to do that." 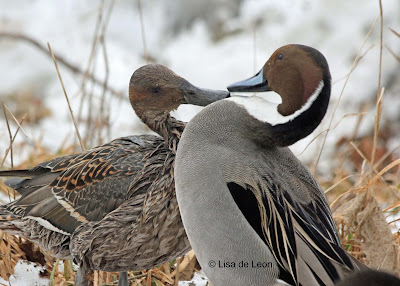 Then, the foray continued. Back and forth they went, with the neck being the most common attack zone. Lasting for about a minute, it was the one who started this fight who walked away first. 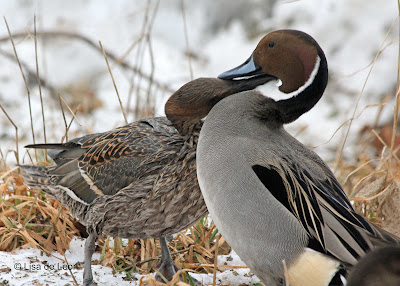 What provoked this? I have so many questions when I am in the field, and while the Internet has many answers, it rarely provides all the information I am seeking. I couldn't find a single picture of a bird looking like the "wet" one. I am left to wonder if this is a male (immature or eclipse) or if it is an aggressive female. 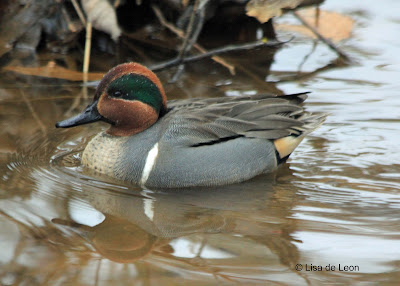 Now, a very similar situation occured on the very next day. This is clearly a male Green-winged Teal (common,) regularly seen at Kelly's Brook. 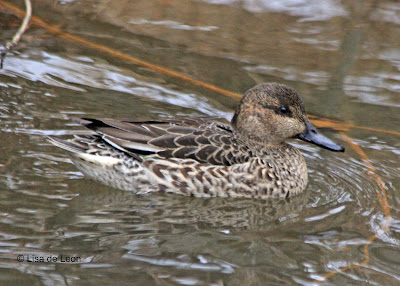 Never very far away, is a little female teal. Not so flashy but quite endearing with its dimunitive size. 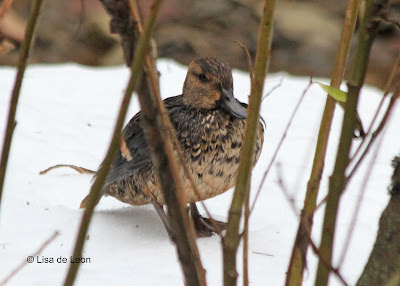 Then, sitting up on the bank yesterday was this bird. Although its colors don't look the same, that is probably a result of the lighting in the location. The facial markings are the same as the female, though.  This bird looked bigger than the birds in the water, but I explained that away with the possibility that this bird is puffed up to stay warm. Yet, look at the wing bar on this bird. It is quite pominent. I can only guess that its showing so much in this picture is partly due to the bird being fluffed up. I think it is safe to say, this is a female Green-winged Teal. I have said it before, and I will say it again. Field trips typically result in the best learning.